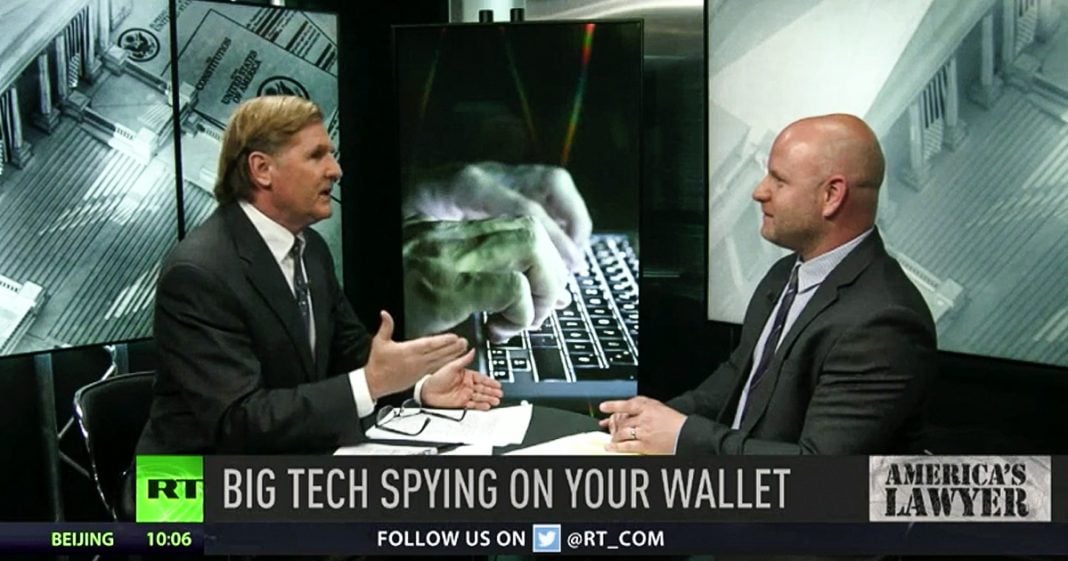 Via America’s Lawyer: Tech giants are being accused of using your personal search data to increase the prices of items that you want to buy online. Mike Papantonio and Farron Cousins discuss.

Mike Papantonio:             Tech giants are being accused of using your personal search data to increase the prices of items that you want to buy online. And unfortunately what’s happening here is this has turned into a whole new industry, an industry where the digital industry understands everything about you. How much money you make, where you live, what’s the demographic, and they use that now to price things for you. Uber got caught doing it. They had information from Uber that says, well, we’ve, we know this guy has money so we’re going to charge him more for this ride. Pick it up.

Farron Cousins:                  What’s happening right now is that everything is connected. If you have a cell phone, if you have a, a laptop or a computer or anything you get on Facebook, Instagram, Twitter, whatever it is, Linkedin, if you’re still on that, everything is talking to each other, all of the other sites. So when you go shopping online, as most of the public does now, that organization, that company, whatever it is, their website, as soon as you log in there, they have already pulled every piece of information that is available on you. They know your race. They know your gender, they know your religion.

Mike Papantonio:             Why is it important? Because when you go to buy something, they know how to price it for you. If you’re going to buy an airline ticket, how many times have you gone on check the price of an airline ticket, next thing you look at, it jumps $1,000? Airline industry got, got caught doing that. But look, I gotta tell you this Alternet article. I wish I knew who wrote this article. It’s excellent. And they talk about this concept of behavioral advertising. And in here, he’s whoever, whoever wrote this, I mean, he or she says, look, you know, I’m okay if I’m going to go buy a new bike and all of a sudden I’m inundated with different kinds of bikes.

But I’m really bothered by when that bike comes in, they understand I’m part of the affluent America, therefore I’m going to charge more because I know all of your demographics. I know where you vacation. I know what kind of home you live in, so I know I can charge you more for that bike. This, this, this writer nails this so well. It’s, it’s, it’s a, it’s in Alternet. It’s called how, how big tech is, is, is spying in your wallet. You know, how are they, how are they spying on your wallet?

Farron Cousins:                  Well, to me what’s really remarkable here is the fact that this is not technically legal. We are talking about price discrimination. You know, if you live up north, you’re going to pay more for something like snow tires than you would in the south. And it’s not a supply and demand issue. It’s because they can. So when you break those basic economic rules, I know they’re not legal laws, but when you break those basic economic rules, you do run the chance of running afoul of the law and saying, we’re charging more just because we think we know where you’re located or you, we saw that you purchased a ticket to go snow skiing, but you live in Miami, so you may want to buy these snow tires. We’re jacking up the price for you for this one time purchase.

Mike Papantonio:             This Alternet author, again, I can’t, this is wonderful work. This is very, very good journalism right here. Says that, he says, for example, in the past, salesmen have had to do, had to go through this qualifying process. Can you afford this? Should I try to sell you this upper end car, middle level car, low end car? They say, now they have all the information. They know, matter of fact, there’s already statistics that if, if you, if if they a white male presents to buy a car, they’ll work more with that white male believing that they’re just more astute. That they’re going to know what a good deal and a bad deal is. But if a, if a, if a female goes in to buy the car, they’re going to jack it up, see what they can get away with. It’s the same thing.

Mike Papantonio:             They want to know everything about you. So when they price things for you, they even give a great example. This is again, well written article. They talk about the fact that the health care, if you take health care as the prime example. If you, if you go in and you’re uninsured and you want simply an x ray, they’re going to charge you 20 times what they’re going to charge to Medicare or Medicaid or the insurance company. Why? Because they can get away with it.

You’re going to lose any ability you may have had as a consumer to negotiate on price to do any kind of, you know, haggling in areas where you’re allowed to do it. And that’s the next step. And people have to understand. You may think that, oh well, no, no, no, no, my Facebook, I don’t allow it to talk to these other apps. We know because it’s been exposed. It’s still happening.

Mike Papantonio:             Okay. Give me an example of the airlines. You want to buy an airline ticket. You used to have a way you could avoid them jacking it up, right?

Farron Cousins:                  Right, right. You know, the advice was always clear browsing history before you go back and look at a, a ticket again, because you’ll avoid the price increase and that was true. But now you can’t do that because maybe you’ve posted on Facebook, hey, looking forward to going to Vegas and in five weeks, they know. They get that information, they see your search history.

They know everything that’s going on in your life, and they do this in a way to where the FTC, the FTC is useless. FTC, there’s no, there’s, there’s no laws that say, you know what, you can get away with this. Now if it’s the worst of the worst, maybe they’ll sometimes pay attention, but run of the mill, no. Behavioral advertising is the thing that we all have to deal with right now. And some of us pay more money because of it.

Farron Cousins:                  And I tell you, Elizabeth Warren is spot on when she says we have to break up these tech giants because they may all be different companies, but every one of them is working with the other one to get your data and use it to make you pay more money doing she is spot on with this.