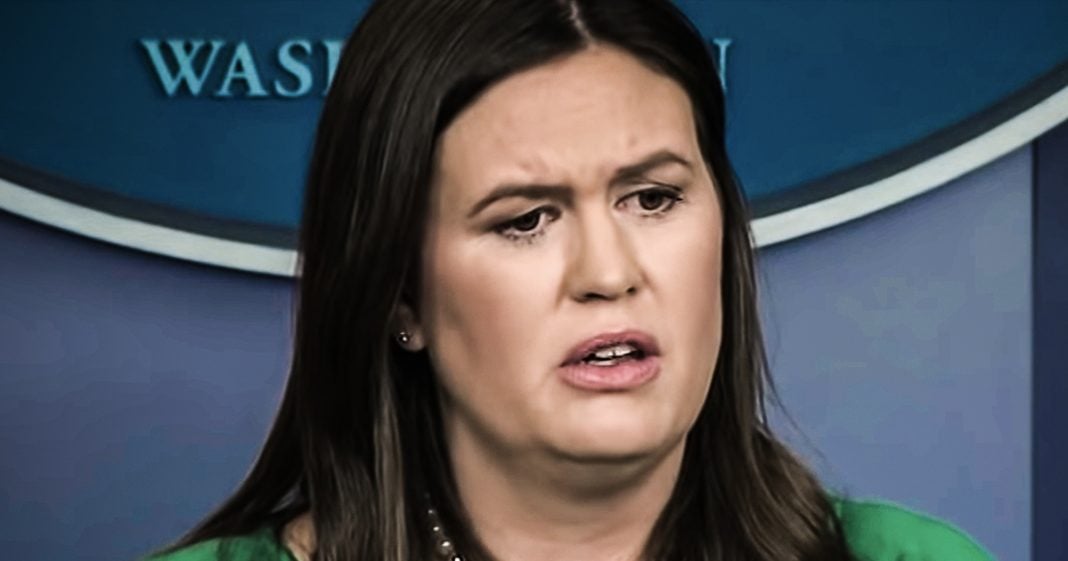 Well, good news, everybody. Yesterday, after 45 days of not talking to the press, Sarah Huckabee Sanders finally held a press conference except that it wasn’t actually press conference and, uh, it wasn’t televised and it wasn’t even really reporters in the room. In fact, it was actually children. Sarah Huckabee Sanders gave a mock press conference yesterday to a room filled with children, uh, as part of your, uh, the, the take your sons and daughters to work day. They were gathered there. She thought it’d be fun to come out and talk to these kids and let these kids experience what reporters in this country should be experiencing. Um, so it was actually nice. I mean, I’m not going to go after her for sitting there and talking to kids. It was a fun event. I’m sure these kids loved it, except for the fact that at the end of it, there was an associated press reporter in the room who asked Sarah Huckabee Sanders, Hey, Sarah, when are you going to do a real press conference with real reporters?

Again, see, as a previously mentioned, it is now been 46 days since Sarah Huckabee Sanders has held a press briefing, uh, which actually by the way, is a new record for the White House, 46 days with no White House press briefing. And it’s ironic because Donald Trump is also on Twitter every day for the past week, telling us that he’s the most transparent president in history. Really, because your administration won’t even talk to reporters anymore. She won’t take their questions. And not that long ago, few months ago, Donald Trump admitted that, yeah, I told the Huckabee Sanders to stop doing this because the press is never going to be fair to us. Well, first and foremost, the press has been fair to you. Sure. If there’ve been a couple stories, a couple stories, really just a few that they’ve gotten wrong. But when you factor in the number of times that you yourself, Donald, or you Sarah Huckabee Sanders have actually just flat out lied to the press, lied to their faces in that particular press briefing room, then I’m going to have to say the press has been about a million times more honest than anyone in your entire administration, past, present, or future.

Because all you people do is lie. And when you run out of lies, as we’ve seen from both Donald and Huckabee, you just attack for no damn reason at all. You just start yelling at the actual reporter. You call them names, you call them fake news. You didn’t get on Twitter, and you start attacking them there yet strip them of their credentials because you don’t like that. They’re asking tough questions. So who is really the one being unfair here? Is it the media? Is it the people who are literally just trying to do their jobs and get answers to some questions? Or is it the administration who wants to bully them for asking a tougher question? The administration who wants to attack them for trying to get answers for the American public. See, here’s what the White House doesn’t seem to understand, and this is an interesting dichotomy here.

The press actually works for corporations. The things they put out are meant to drive a profit for the companies that own their, their publications. The White House on the other hand works for the American public. We pay their salaries, we get to vote them in or out of office, they work for us. But the press is supposed to be working for us and getting us answers and doing things. And meanwhile this administration wants to stonewall everything and not tell us anything. So even though the press is technically working for these corporations, they’re the ones who are trying to do more good for the American public than our actual employees sitting there in the White House. And I find that very interesting. And I think that’s something that this press needs to remind this administration every single day because at the end of every single day, they are all answerable to us. And that is why it is so important that we get the truth. And that is why it is so important that Huckabee Sanders get off your butt and start doing these press briefings again. Sure, she’s going to lie to us the entire time, but at the very least, we get reporters asking tough questions, putting her on the spot, putting this administration on notice that we know what’s going on and we’re not gonna let it go.