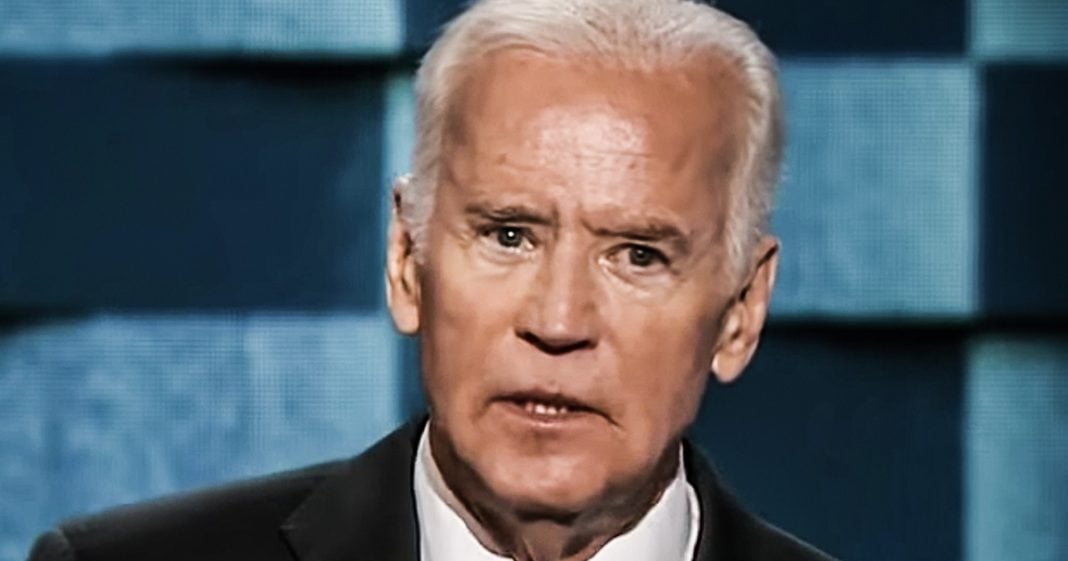 Former Vice President Joe Biden is officially in the race now after launching his campaign Thursday morning. Unfortunately for Democrats, Biden spent Thursday evening surrounded by lobbyists and Republican donors, showing that he isn’t going to be the kind of transformational leader that this country desperately needs. Ring of Fire’s Farron Cousins explains how Biden’s day one activities, combined with his record, are a non-starter.

Well starting yesterday, Joe Biden is officially running for president in the Democratic Party and he really didn’t have such a great start to his day. Sure. He raised a ton of money. He got a lot of headlines. But when you look at the substance of his Thursday, it was actually a really bad day, not necessarily for Joe Biden, but for voters all across this country because Joe Biden, the same day, day one basically of his campaign, decides that I’m going to spend the evening with corporate donors, lobbyists, and even some Republican donors shaking some hands and cashing some checks. That’s how Joe Biden spent the first evening after officially jumping into the 2020 race. The a massive fundraiser he attended was at the home of Dave. Uh, David Cohen, the, uh, Comcast executive. You know, the folks who’ve been fighting to take control of our Internet and screw over American consumers and make the Internet a little less free.

That’s the guy who Joe Biden chose the pal around with on announcement day. Also present in the meeting. According to Lee, falling over at the intercept was a Kenneth Jarron, a lobbyist with Ballard Spahr who’s registered to work on behalf of toll road operator conduit and several healthcare interests. You also had Alan Kessler, who was a lobbyist, worked for the firm of Duane Morris Kessler’s, registered lobbying, Pennsylvania for American Airlines and the global information tech from Unisys Corporation. Uh, you also had Michael Nutter, uh, who works at a firm with vast government affairs operations, senior advisor to a lobbying firm there you had Daniel Hilferty, member of the Biden host committee for yesterday, and he’s the chief executive at Independence Blue Cross. He’s also on the board of America’s health insurance plan, which is the trade association working to defeat Medicare for All given the current climate here in the United States. Given the polling data on what kind of policies the public actually wants left, right, and center Joe Biden decided to spend his day with the very people fighting those policies.

That’s the kind of guy Joe Biden is in as launch video. He made it all about Trump or returned to normalcy, get away from Donald Trump. And it all sounds good in theory, but guess what, Joe? The public wants policies. The public wants things to talk about. The public wants to know what differentiates you from everybody else and more importantly, the public wants to know if you’re still the horrible piece of crap that you were when you were a senator because we haven’t forgotten that you’ve got so many skeletons in your closet and most of them have already come out and they’re going to create a very real problem for you as this campaign continues. Hell yeah. You’ve got the name recognition. You were vice president for eight years. You also have failed at running for president at least twice in the past and hopefully we’re going to add a third one to that list.

It was a time when I actually liked Joe Biden and you thought it was a decent enough politician. That was before I really knew who he was. I am no fan of Joe Biden. I do not like Joe Biden and I do not think by any stretch of the imagination that we needed Joe Biden to enter this race. We already have some centrist out there, interest who have also somewhat embraced a few progressive policies, centrist that we think we could pull further to the left if the need arises. We also have some true hardcore progressive’s running for president, and we also have some mealy mouth folks talking about getting back to normalcy and feeling good. Joe Biden, the niche that he would have filled has already been filled in this primary. There was absolutely no reason other than ego for Joe Biden to enter this race, and if he is going to spend his entire campaign meeting with lobbyists, donors, even Republican donors, the people fighting against the very policies that we need for this country than hopefully his campaign is going to be very short lived.