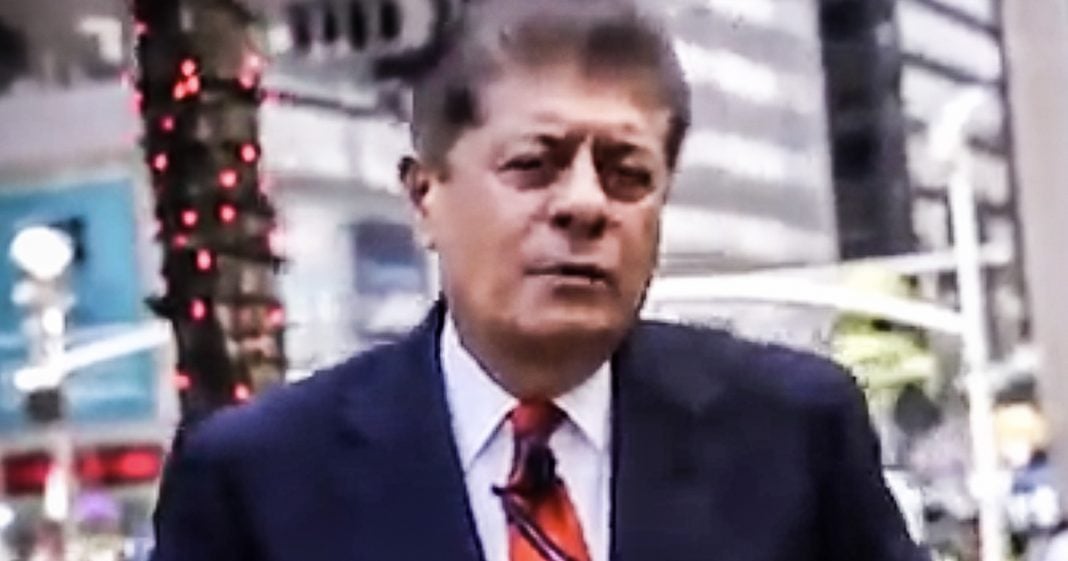 Fox News judicial analyst Andrew Napolitano is done trying to stick up for Donald Trump, and he released an op-ed and video yesterday explaining that Donald Trump 100% committed obstruction of justice and that William Barr is protecting him from those crimes. The Fox News façade is started to crumble as more and more hosts on the network appear to be breaking ranks and starting to question the President. Ring of Fire’s Farron Cousins discusses this.

All right? They let him post his op ed on the website, but apparently he had to go like down out in the street, outside of the building in order to uh, film this little video. Now, I don’t know if that was intentional or he just said, hey, I want to do it outside. It’s a nice day. Let’s go walk out in the park. But nonetheless, what this shows us is that Fox News is starting to crack a bit. When you have somebody who has been a loyal right wing lapdog like Napolitano finally have to come out and say, listen, the president’s straight up lying to you here. He broke the law and the report shows us that he broke the law and more importantly, Napolitano points out. William Barr, the attorney general of the United States is covering for him and lied about what’s actually in that report.

That’s unequivocal folks. And again, Napolitano is no progressive resistance hero. He is a right winger and when even he, after working at Fox for years and years and years is willing to come out and stand up and say, all right, hold up. This is wrong. The president’s lying to you. Hell, probably my own networks lying to you. I don’t think he would go as far as to say that, but the willingness to finally come out and break ranks with your network, with your cohost, with the colleagues, that says a lot because now suddenly there’s another voice in the Napolitano’s actually been doing this for a few weeks. Suddenly there’s another voice willing to speak out against him. It’s not just Shepard Smith. We’ve seen weakened host on Fox News also start to show the same thing, you know, interviewing a Kellyanne Conway or a Huckabee Sanders and calling them out for lying. There are cracks in the facade is what I’m trying to say. They may be small, there may only be a few of them, but the cracks are starting to appear more and more, more voices inside that network are starting to speak out and yeah, those voices may not be as loud or as powerful as your Hannitys and your Tuckers, but they’re there. Napolitano may not be having nightly pillow talk with Donald Trump on the telephone, like a Hannity or a Lou Dobbs, but he’s letting the viewers now that is powerful, and that is important. We know what this Muller report says based on the parts that are not redacted.

We know we got at least 10 instances of obstruction of justice. The Democrats in Congress also know that let’s hope they move forward with some kind of charges against him to show the world that he’s not going to get away with it. But that’s the legal side. The other side is the media, and if Fox News is not yelling in one coherent voice that the president was exonerated, okay, then there’s still a chance some members of that audience are going to understand that the president is lying to them, and more and more people with that network are starting to speak out, and that’s not going to bode well for Donald Trump.