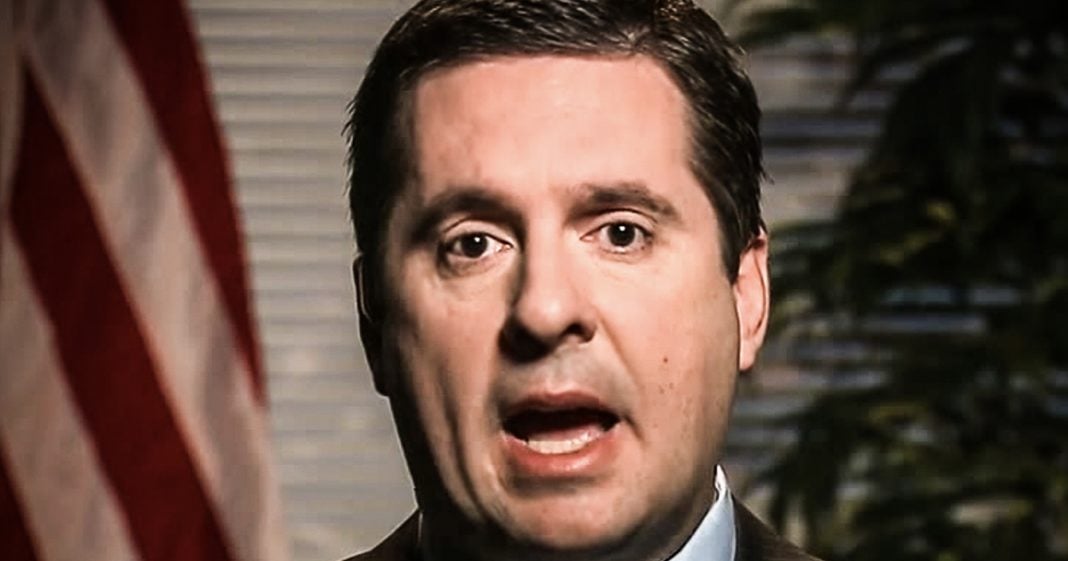 Republican Devin Nunes is terrified of his own constituents. His office has a nasty habit of calling the police on protestors and now he’s just trying to hide his activities from the public so that they can’t heckle him. According to reports, Nunes is holding a fundraiser at a super secret location because he doesn’t want ANYONE to disrupt it. Ring of Fire’s Farron Cousins discusses this.

You know what the Republican’s serving in the House of Representatives, there’s no shortage of crazy. There’s a shortage of of Weirdos or conspiracy theorists, but when it comes to being the most fearful member of the US House of Representatives on the Republican side, that title is always going to be held as long as he has a congressmen by Devin Nunes. See, Devin Nunes is a guy that has pretty much terrified of his own shadow. You know, he’s terrified of these parody Twitter accounts. Devin Nunes, a cow. Oh God, let me sue them, which only served actually just make them more popular than, than Devin Nunes, his Twitter account. So his fearfulness has backfired on him spectacularly and that’s just in the last month and a half. But he has grown so afraid of the world that he is now being reduced to having to do a fundraiser in complete secret that fundraisers push to be taking place today. But nobody’s allowed to know where it is unless you got one of those super secret Devin Nunes invitations.

And Luckily newspapers in his home district did get copies of that invitation. Although I don’t know if they actually published the address because they were war. Do not publish the address of this fundraiser or all. I swear to God we’re going to cancel the whole damn thing. See, Devin Nunes earlier this month had to cancel an event that he was going to go to because on social media, word got around that he was going to be at this RNC thing and so they said, hey, let’s show up there and heckle him. Let’s show up there and disrupted. Let’s protest this event in. Devin Nunes went running off like a terrified little man child because that is exactly what he is. Devin Nunes is a manchild masquerading as a sitting member of the US House of Representatives and a Republican leader and now because he’s so terrified of being confronted by his own constituents, he is having to hold this fundraiser in complete secrecy.

Nobody can know where it is and it’s not even like it’s a big money fundraiser. It’s like 55 bucks to get in the door. It’s only 150 bucks for VIP access. I guess Devin Nunes has now become the discount congressmen because everybody hates them so damn much. He knows he probably isn’t going to get those tens of thousands of dollars per head fundraisers anymore. So share a 50 bucks. I mean, hell, you can’t even go to a football game in this country for under 55 bucks, but you can certainly have access to Devin Nunes as long as of course you, you promise to just be super nice. Don’t make any sudden movements cause you’re going to scare off Devin Nunes and for the love of God. Don’t ask him any tough questions because that scares a little Devon and little Devin. Oh, go running off into the corner and cry if you make them sad or scared. That’s why he can only do these super secret events. Oh in makes sure if you pay the $55 to get into this event that you don’t pull up Twitter and he sees that Devin Nunes is cow account because my God, that’s probably just going to send them right over the edge.