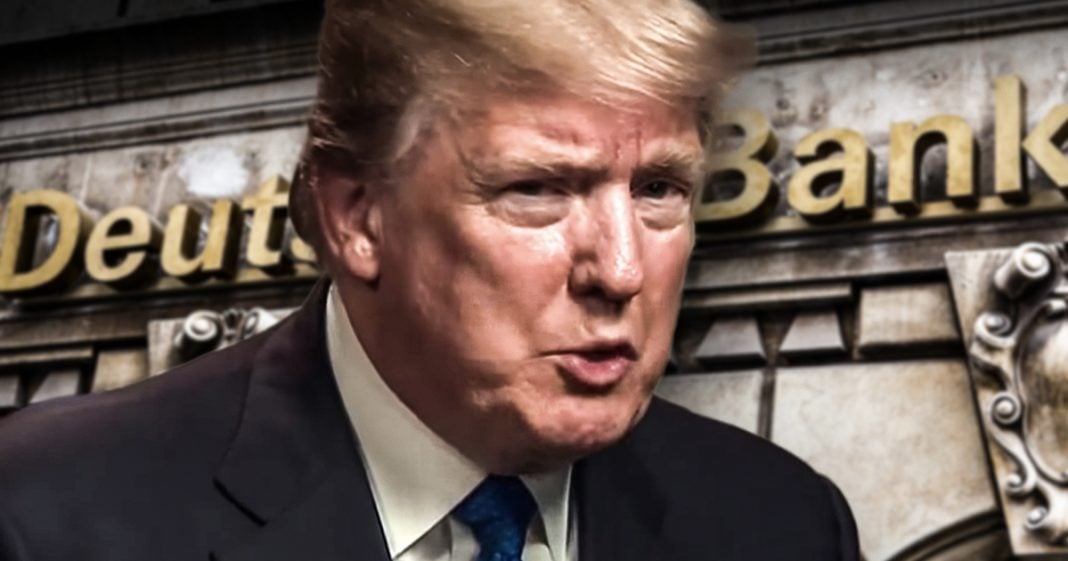 Donald Trump has been fighting so vigorously to keep his financial records out of the hands of Congress that he apparently forgot that prosecutors in New York are working on the same thing. And the New York Attorney General’s office is having a much easier time getting these documents. Reports confirm that Deutsche Bank is now in the process of handing over these materials to the NY AG’s office, and Ring of Fire’s Farron Cousins explains what this means.

Donald Trump and his legal team had been fighting incessantly to prevent house Democrats from getting their hands on any of the presidents, financial records, Democrats in the house. Obviously you want to look at potential bank fraud, wire fraud, tax evasion, money laundering, whatever it is. They want those documents and Donald Trump is fighting like hell to make sure they never get them. But while Trump was so busy making sure Democrats didn’t get their hands on those documents, he forgot one very important thing. And that is that the New York attorney general is already working with Deutsche Bank, one of the few banks actually willing to Lynn Donald Trump money over the last few years. And as of today, those documents are now in the possession of the New York attorney general. Those same documents that he has been fighting so hard because he doesn’t want anybody to see, they’re now being handed over to New York Attorney General Latitia James.

So what is he going to do now? This bank that he has been relying on because nobody else would lend him money. The bank that according to Michael Cohen, he lied about his net worth in order to secure these loans, is 100% handing these documents over to the investigative body that also wants to know about the finances, how he inflated his value, because that’s also what Michael Cohen told investigators in New York state. So yeah, Donald Trump is in a world of hurt right now. But what’s funny to me is that he seems to have forgotten all of the New York investigations that are happening right now. Those are the ones that carry the very serious penalties for him because as we’ve said a hundred times, Trump can’t pardon himself or receive a pardon from a future president for state crimes. Those pardons only go for federal crimes. So if something were to happen in New York and they find criminal activity committed by Donald Trump, or even any one of his children, there’s literally nothing he could do.

He could fight it in court if he wants to. But if convicted, he would never be able to get a pardon. Nor would any of his children. Uh, specifically here are the, uh, entities that they want to know about the financing. You got Trump international hotel in DC, Trump national Doral, Miami, Trump international hotel and tower in Chicago. And the unsuccessful effort to by the buffalo bills, a NFL team. So there’s lots of different avenues here, but this is all again based on things that Michael Cohen had told Congress and investigators up in New York. And that is that Donald Trump would inflate his net worth, basically lie on his financial statements that he would then give to the bank. The bank would use these a basis to, uh, give Trump money or to not give Trump money. But if you lie, when filling out these applications, lying about your net worth, lying about your income, lying about any of your assets, that is bank fraud and that is absolutely illegal and absolutely something that the average American citizen would go to jail for.

There’s no reason why Trump, even as president of the United States, couldn’t suffer the same fate after all, this is New York. They’re not exactly friendly to him up there. It’s not like he’s going in front of some of his other buddies that he’s made down there in DC. Some of the judges he’s appointed. No, this is a completely different ballgame and it’s one that Donald Trump was not prepared to play. Sure. He can fight Democrats in Congress all day long because he’s there. He’s in DC, he’s got that Twitter feed, but he doesn’t even fully understand the extent to which the investigations are taking place in New York and that’s why he’s been relatively quiet about them. Maybe he forgot, maybe his legal team isn’t good enough to understand what kind of trouble this man is facing because again, not just based on Cohen’s testimony with, based on the evidence we’ve seen, the instances we know about Trump did lie about the values of his properties. He lied about his personal net worth. He lied about how many units had been sold and some of his condos in order to get other people to invest in them. The man is a pathological liar. He lies as president. He lied as a businessman. He lied to the banks. This one isn’t going to end well for Donald Trump. So he can fight Democrats all the live long day if he wants to, but the real fight is going to be taking place in New York and he is grossly unprepared to have that battle.