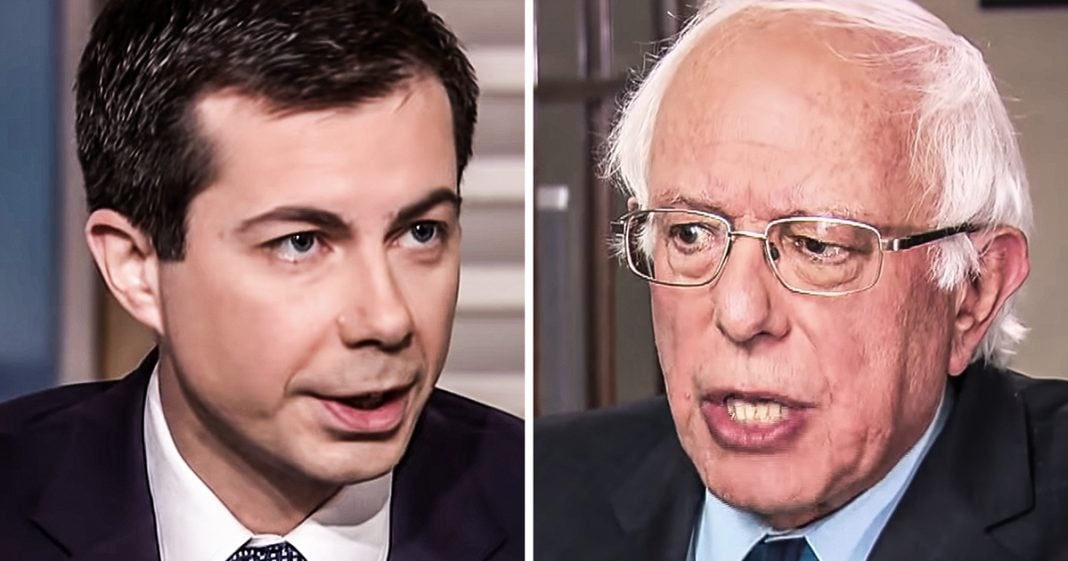 Pete Buttigieg is certainly the king of feel-good stories and a lesson in class, but the behavior that actually matters is being completely overlooked. Buttigieg has taken another cheap, and factually inaccurate, shot at Bernie Sanders this week by saying that he doesn’t believe Bernie can win a general election. The polls say otherwise, and Buttigieg is starting to show his true colors with these constant attacks. Ring of Fire’s Farron Cousins discusses this.

South Bend, Mayor Pete Buttigieg continues to take cheap shots at Senator Bernie Sanders who according to the latest round of polling is officially the Democratic Front runner. Even with Joe Biden throwing his hat into the ring. Now before we get into this latest thing, that Buttigieg said, it’s worth noting that Democrats right now kind of have a a agreement to not be attacking personally one another in this primary. It’s not happening except for Buttigieg going after Barney and earlier this week Bernie Sanders supporters saying they just wanted to blow up the system because they’re too extreme. Well, now he’s taken another cheap shot and said that I don’t think Bernie Sanders could win a general election against Donald Trump. And to that, I have to say for somebody as intelligent as Buttigieg is, that was an incredibly stupid statement to make because it flies in the face of reality and polling data that he could easily find online at any given point.

Bernie Sanders is consistently polling at the top of the Democratic presidential nominee list. He is also beating Donald Trump and head to head match ups. Right now the latest polling data we’ve got us, he’s beating Donald Trump in those Midwest battleground states that Donald Trump secured in 2016 to give himself the electoral victory needed to win the White House by every possible measure based on the polling data right now could change in the future, but right now Bernie Sanders Beats Donald Trump hands down. That’s a reality. I don’t care if you don’t like Bernie. That’s the reality. That is what we’re living in. You can’t deny the numbers and yet Buttigieg just did that. But instead of everybody saying like, what the hell is this guy’s problem? Why does he keep going after Bernie Sanders when everybody else is agreeing to not attack each other personally? Instead of talking about that, they’re all talking about, oh, he released a sign language video yesterday. He’s such a class act. What a great guy. Oh my God, does he know nine languages including ASL? This guy is all flash and no substance and I am not kidding when I say that. Every time this man opens his mouth. I like him less. And that’s really something considering the fact that just a few weeks ago I had said that Buttigieg was in my top three. Okay.

Now I don’t even know that he would be good enough to make it into my bottom three out of the 20 Democrats running for president, he doesn’t know exactly what he’s doing and I know he says he’s got a lot of policies. People will drive you to the meet pete.org website where you could watch videos about him talking about things, but he doesn’t have a path to do it. And that’s a problem. Elizabeth Warren is laying out paths every in Buttigieg wants to go out there and just try to impress us with a nice smile with his intellect. And yeah, it’s sucked these last two plus years, having a president dumb as a bag of rocks and it would be nice to have an intelligent president again. However, that’s not all there is to it. There are plenty of intelligent people running for president on the democratic side now. I have no doubt that Mayor Pete, he might actually have the highest Iq out of any of them. It is impressive.

The fact that he speaks all these languages is impressive. What’s not impressive is his record in is more and more of that stuff comes out. We’re starting to find out that this guy is absolutely a hard core centrist who you know what? Maybe he’s not so good on on racial issues as we’re finding out from those police tapes that they tried to bury. Right. This guy’s got some skeletons in his closet that are going to start creeping out here very soon and no matter how many times he goes out there and wows us with another language or wows us by playing another musical instrument. That’s fantastic. Unfortunately, this isn’t a talent show. This is vying for the highest political office in the land and if this man thinks that denying the reality of the poll numbers today is going to propel him to the top of that ticket. He is sadly mistaken because the American public, yeah, they might be enamored with you right now, but they were with Beto just a month ago. They were with Kamilla Harris a month before that, they’re going to be enamored with Joe Biden for the next month. People are coming and going from the top with the exception of one, and that happens to be the very man that mayor Pete says stands no chance of beating Donald Trump. The polls beg to differ, and so do a lot of people in this country.