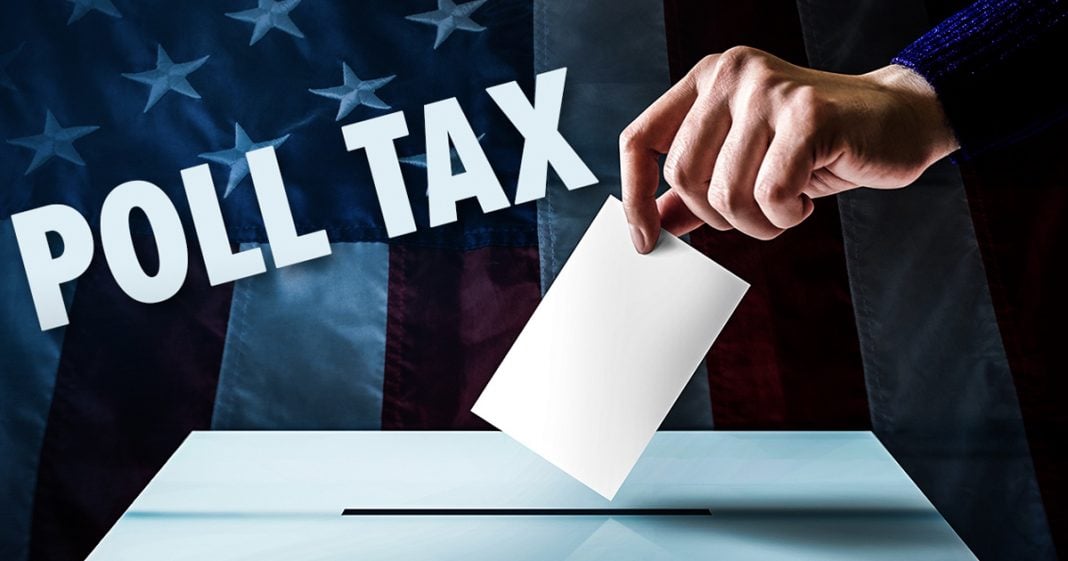 Florida Republicans are some of the worst Republicans in this country. After a vast majority of Florida voters passed an amendment this past November giving former felons their right to vote back, the Republicans who control this state went into hyperdrive to prevent these men and women from getting their rights back. They’ve now instituted what amounts to a modern-day poll tax to prevent 1.4 million new voters from going to the polls. Ring of Fire’s Farron Cousins discusses this.

You know, one of the greatest memes to really erupt over the last few years is the meme of Florida. Man. You know, we have these open records laws here, the state of Florida. So that’s why you always see Florida man taunts alligator and then gets eaten and other stupid stuff like that man arrested for holding up a Taco bell with a chicken nugget or whatever it is. But I think the real Florida man story, the real crazy stories out of this state, really originally with our Republican controlled state legislature, you see back in November in the midterms, voters in the state of Florida, by more than 60% of us voted to restore the voting rights of former felons, former convicts, 1.4 million people in the state of Florida. Majority of people in this state stood up and said, we want them to have the right to vote back. They’ve paid their debt to society, let them vote. The Republicans who run this state, ever since that passed, had been freaking out trying to figure out a way to make it not happen to go against the will of the people after they pass this constitutional amendment. And this week they did it. They finally succeeded. They have passed. Okay?

A new law in our state, as they call it, an attempt to clarify the amendment. And what this new law does is it institutes a poll tax and there’s no other way to describe it. It says that, okay, if you’re a former felon, you’ve done your time, you’re free. Now we just voted to give you your right to vote back. But before you can register, we want you to pay back all of your court fees. Any legal fees or state fees are liens associated with your prosecution. You know, we had to pay money to prosecute you and put you in jail and you’re going to pay us back before you were allowed to go vote. Okay? That ladies and gentlemen is a poll tax, okay?

Poll taxes are illegal, okay? But that didn’t stop the moronic Republican’s running the state of Florida from putting it in place. That’s what we’re dealing with. That is the level of stupid that we have right now in my home state. And do you know why Republicans are doing it? I think it’s pretty obvious they’re doing it because they’re terrified. If we suddenly in this state had 1.4 million new voters, okay, that changes. 100% of the electorate in this state absolutely changed forever. And Republicans are terrified of that because they have had a stranglehold on this state for decades, decades. But these 1.4 million new voters would absolutely change that in 2020. So they do what they can, even if it’s illegal, even if they know that it’s going to be challenged in court and they’re going to lose if they can delay for as long as possible, letting these people get the right to vote back. They win.

Yeah, they will. When we have had a lot of groups come to Ford, including some, uh, being led by the guy who should be our governor, Andrew Gillum to register these people to vote and now they’re going to run into these hurdles because you’re going to have hundreds of thousands of them who have no way of paying those court fees at all. So they’re not going to be able to vote. They’re not going to be able to register. And even if this does go to the courts and it gets challenged and then it gets appealed and whatever, it may not be settled and thrown out and instruct down prior to the 2020 election, which could easily hand this state to Donald Trump. But make no mistake, these 1.4 million people who thought they were about to get the rights back, only to find out they can’t have them, they know which party took them away from them again.

For the second time, these people lost their right to vote. It was 100% of the Republicans because the vote to pass this legislation passed on party lines. Republicans were for it. Democrats were against it. So when those 1.4 million people eventually do get the right to vote back and they will, which party do you think they’re going to support the party that said, no, screw it. We’re taking you back to the Jim Crow era is and instituting a poll tax or the party that was literally going door to door trying to register them to vote. I got news for you. It’s not going to be the Republicans, which means when all this is said and done, the state of Florida, the political control of the state of Florida, the electoral map of the state of Florida will forever be changed in a way that will never benefit the Republican party again.