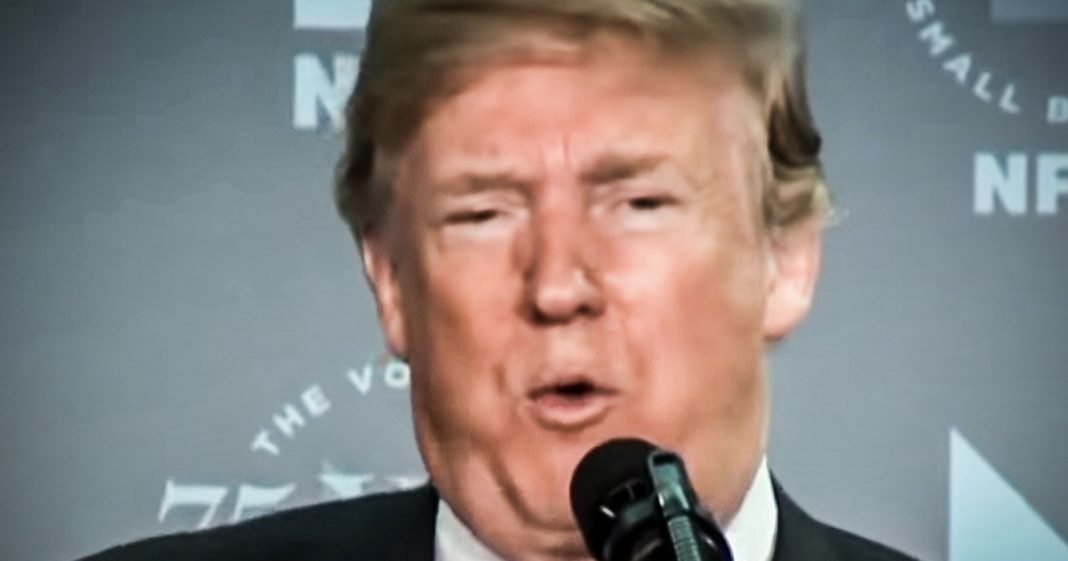 In an interview published in The Washington Post, Donald Trump insists that he and his administration are finished complying with investigations and he has no reason to cooperate with anyone else for any ongoing matter. His reasoning is that he cooperated with Mueller, even though he didn’t, and so he’s done now. That’s not how any of this works, and Ring of Fire’s Farron Cousins explains how Trump is going to find himself in even more trouble by refusing to follow the rules.

Yesterday, The Washington Post published an interview with Donald Trump where he told them that neither he nor anyone else in his White House or his administration would be complying with any other investigation taking place right now or in the future. Trump says that his reasoning for this is because they fully cooperated with the Mueller report. They let that happen. They did what they were supposed to do and since they’ve now been exonerated, they literally don’t have to comply with anything else. Um, every part of that statement, every part of Donald Trump’s reasoning is a lie. You didn’t fully cooperate. You didn’t go sit down for that interview that you promised you would. Then your lawyer said you wouldn’t. Then you said you wouldn’t, but then they said you would, but then you never did. You submitted some written answers as for the rest of your administration cooperating. We know now even from the heavily redacted report that they lied so much to the special prosecutor that he couldn’t even basically finish the investigation.

He hit a dead end because everyone in your administration lied to him. He had no other leads to go through. So that was the end. So no, nobody in your administration cooperated except maybe Don McGahn. But, and you’re now trying to prevent him from going and testifying before the congress. You don’t want that to happen because you know the McCanns are gonna go in there and explain how you obstructed justice his move right now saying we’re not going to comply with anything. And so far he stuck to it. We just passed another deadline yesterday of a turnover. The tax returns, which they didn’t, they’re now suing to stop Democrats from being able to get their hands on his other financial records, which they have subpoenaed. Trump is setting himself up right now for a losing legal battle. Congress has the right, even if it is politically motivated, and that’s where people have to understand this isn’t politically motivated, but even if it were, they would still have the right and the authority to request these interviews, to request these documents, to subpoena people.

It’s part of their responsibility. It doesn’t matter the motivation for it. They have the authority to do it and Trump does not have the authority to prevent his administration from cooperating. He doesn’t have the authority to tell them not to go because that’s going to set up a legal fight that is going to challenge the very basic separation of powers that exist in this country. And that’s not one that Donald Trump is going to win. His administration has been shot down in the vast majority of the legal cases that they’ve had to defend themselves in when they’ve overstepped their power, overstep their, I think his loss rate is 94%. Uh, we talked about it a month or two ago. 94% is their loss rate on court cases. They bring in Trump’s now saying, nope, we’re not going to comply. We’ll go to the courts if we have to.

Yeah, that’s not going to work out the way you think it’s going to work out. Congress has the authority to do this. You don’t have the authority to stop it. And if you want to set up a legal battle and then eventually lose and still have to turn over those documents, it’s not going to go well for you. If you think there’s nothing to hide, then turn them over right now. And let it be done with. But if you try to hide them and you hide them for six months, maybe even a full year, but then the court’s forced their release and then we find some crimes that’s going to look so much worse for you. There’s no good outcome in this scenario, in any scenario regarding this that works out well for Donald Trump. So he can boast, he can brag, he can talk a big game about how we’re not complying anymore. And there’s nothing they can do about it. But the reality is this man is absolutely terrified of what he knows is going to be happening to him in the very near future. And he knows there’s absolutely nothing he can do to stop it.