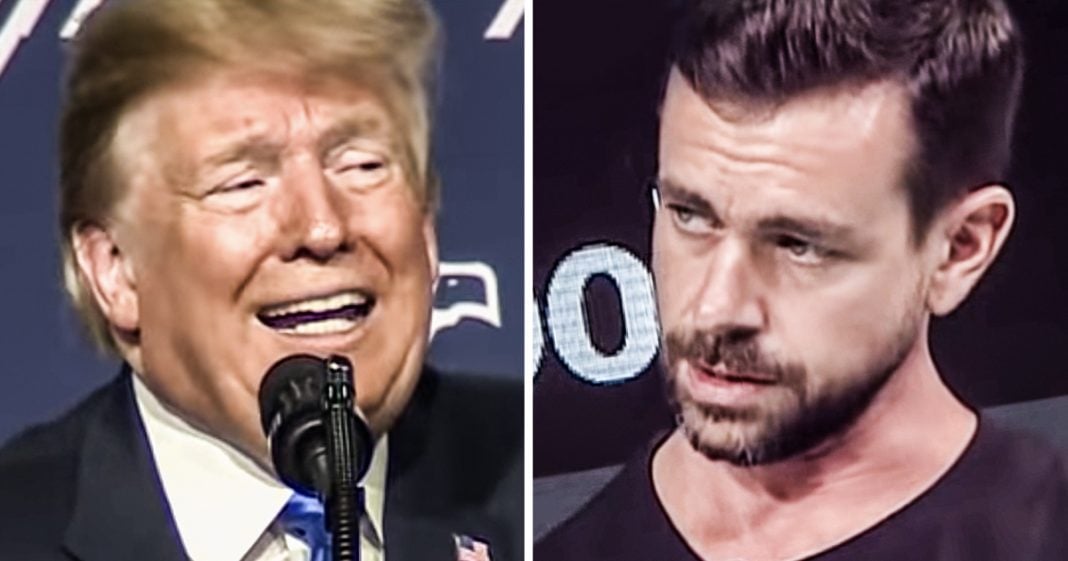 On Tuesday, Donald Trump met with Twitter CEO Jack Dorsey to talk about his falling number of followers. The CEO had to explain to him that they were purging bots and fake accounts, but the President wants all of his followers back and believes that there is a conspiracy afoot. There are very real problems facing this country today, but the President’s biggest concern is the number of people following him on a social media website. Ring of Fire’s Farron Cousins discusses this.

On Tuesday, Donald Trump met with Twitter CEO Jack Dorsey, basically to whine about the fact that he’s been losing quite a few followers on Twitter. What’s happened as Dorsey attempted to explain to Donald Trump is that they’ve been going through and deleting counts of a bots spam accounts, and people who are no longer active on the network, let their accounts sit for years. They’re just deleting those because they’re supposed to, but that answer is not good enough for Donald Trump. Most of the meeting was actually spent talking about the fact that he’s losing Twitter followers. He also spent some time talking about the fact that it’s posts aren’t getting enough likes anymore. He thinks he’s being shadow banned as our other conservatives spreading that conspiracy theory when they tweet out something that doesn’t do as well as they feel it should. Let me put this into perspective. Okay. Climate scientists have told us that we’ve got 12 years to take action before we start seeing the worst in almost irreversible effects of climate change.

Uh, people in the United States are literally dying because they can’t afford medical care. Uh, we have an opioid epidemic killing 117 people every single day in this country. Um, one third of people in this country every single day are drinking tap water that has cancer causing chemicals in it. Uh, millions more drinking water with unacceptable levels of lead in it. Uh, we’re still involved in these unwinnable conflicts in the Middle East and we now out and now find, find out today that a u s military is actually killing more civilians over in Afghanistan. Then the bad guys are. So we’ve got that going on. We’ve got children locked in cages down on our southern border. And the president’s biggest concern is how many followers he has on Twitter. Now, hey, could have called anyone to the White House because they initiated this meeting. They could have called a climate scientists and to talk about that problem they could have called in health insurance, CEOs, drug companies, CEOs to deal with medical costs problems.

They could have brought in foreign policy experts, military advisors to advise them on how to get the hell out of the Middle East. They could have done a number of things yesterday, but the president of the United States wanted to spend the day yelling at a CEO because he was losing Twitter followers. We have officially hit peak idiocracy here folks. It doesn’t get much dumber and more selfish than what the president did yesterday. This is not a humorous story. This is not another old man yells at technology story. This is the president of the United States is so vain and vacuous that the only thing he cares about are how many people follow him on social media while American citizens die every single day because they can’t afford basic necessities. That’s what this man has chosen to prioritize. And anyone who can look at what happened yesterday and still say, Yep, trumps my guy. You’re spitting in the face of tens of millions of Americans who are going through hell on a daily basis, hoping that one of our elected officials is going to reach out to them and offer some kind of relief. And instead they look at the White House and they see a guy so consumed with himself that his biggest concern as president is how many people are liking his Twitter posts.