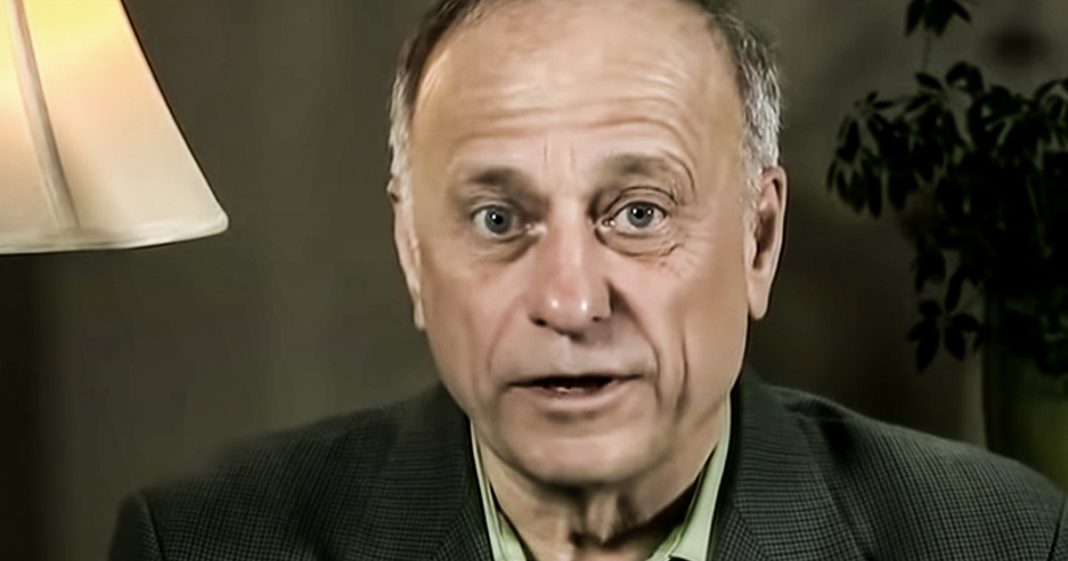 At a townhall event this week, white advocate and Republican congressman Steve King said that the struggles he’s gone through are similar to those that Jesus Christ went through in his lifetime. King has a history of making disgusting remarks about non-white and non-Christian people, proving that the man has a very clear bias towards people who don’t look like he does, which is pretty much the exact opposite of how Christ lived and died. Ring of Fire’s Farron Cousins discusses this.

Disgraced, Republican Representative Steve King was back in his home state of Iowa this past weekend doing a town hall where he told his fellow Iowans that he’s basically been through the same kind of struggles as Jesus Christ according to King, the controversies that he is endured, the attacks that he has endured. Basically just like what Jesus went through on a Good Friday, you know when he was marched through the streets and then crucified and whipped and all of that stuff. Yes, Steve King totally went through that if not even worse. Probably here is exactly what Steve King had to say. And when I have to step down to the floor of the House of Representatives and look up at those 400 and some accusers, you know, we just pass through Easter and Christ passion and I have better insight into what he went through for us. Partly because of that experience. So according to Steve King, having to go speak on the floor of the House of Representatives and look at those 400 people who understand that he is a bigot is basically just like what Jesus went through through Easter.

You know, being nailed up on a cross. Yeah, being called a bigot because you’re a bigot is just like what Jesus went through. A, first of all, Steve King obviously has never read an actual Bible. He clearly doesn’t know what Jesus was all about. Uh, because Jesus would be one of those people staring down from the a stands. They’re judging you probably. I know Jesus isn’t supposed to judge, but trust me, you wouldn’t be the kind of person he would be like, hell yeah, dude, want to come be an apostle? Now you’re the kind of person he would chastise your, the kind of person he would try to fix because you’re so screwed up. And obviously what Steve King is referring to, these ordeals that he’s been through is one, uh, being stripped of all his committee assignments because he keeps maKing racist remarks every time he does an interview and he doesn’t apologize for him.

In fact, he does the opposite. He says, I have nothing to apologize for. So yeah, that’s kind of what’s going on with representative Steve King. But luckily for those of you who think Steve King May in fact just be labeled a racist, even though he’s not the New York Times did a great job and you can find that link in the description of this video. They did a great job of just doing a timeline of all of Steve’s Kings, a racist, greatest hits. Basically. Here’s just a few, uh, 2005, he was the chief sponsor of a bill to making lists the official language. And he did this because he was unhappy. Uh, well I’ll just get to the next one. Actually. A, he sued the Iowa Secretary of state for posting voting information on an official website in Spanish, Laotian, Bosnian and Vietnamese. Steve King is the kind of guy that gets pissed off when you have to press one for English.

He doesn’t like seeing other languages. It triggers him. And so he sponsored this bill to make English the official language cause he can’t even tolerate seeing another language available for people in this country. So yes, that was a racist move on behalf of Steve King in 2006 he claimed the 25 Americans die daily because of undocumented immigrants, which was an unsupported and illogical leap from government statistics, which years later influence talking points by Donald Trump. Also in 2006 on the House floor, King demonstrated a model of a 12 foot concrete border wall topped with electrified wire that he had designed.

Yeah, so this is 2006 right? 10 years before Donald Trump became president at Steve King took it upon himself to go to Michael’s one weekend, I guess, or maybe hobby lobby got shit to build a wall. Maybe you had to stop at Lowe’s and get some wire. Somehow electrified it and said, this is what we’re going to do on the southern border because it’s not just bad enough to have razor wire. We’re also going to electrify it so it’s going to cut you and then it’s going to electrify you because that is what Steve King wants to happen to nonwhite people. God, it gets worse. Can refer to multiculturalism as a tool for the left to sub. Divide a culture and civilization into our own little ethnic enclaves and pit us against each other. He said that in 2012 and also in 2016 at the Republican National Convention, King claim that nonwhite groups haven’t contributed as much as whites to civilization. So at the 2016 RNC where they officially announced Donald Trump was their nominees, Steve King gets up on that stage and he says whites are better. Whites have done more throughout history for everyone.

Okay. So yeah, I guess, I guess that is a lot like what Jesus went through, or, I’m sorry. No, I’m wrong. It’s nothing like what Jesus went through. Steve King, you are a bigot. You’re a racist, and you do not deserve to serve one single day in the United States House of Representatives. And hopefully those voters that you just spoke to an Iowa, understand that when it comes time for your next election.