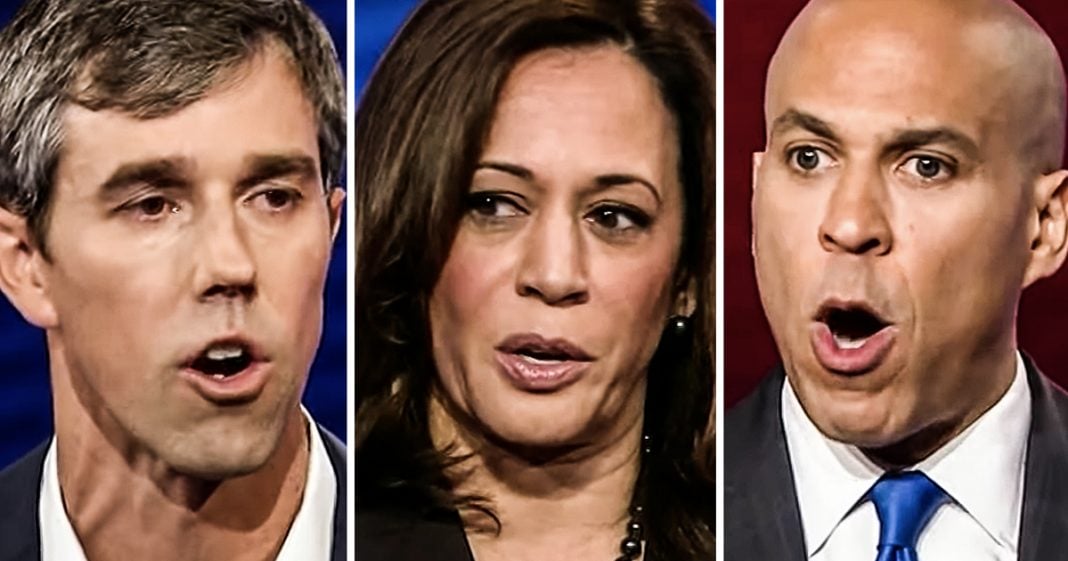 Several Democratic candidates for president have broken their pledge to not take any money from corporate PACs and lobbyists, according to the recent financial disclosure and fundraising forms. Kamala Harris is one of the worst offenders, but Beto O’Rourke and Cory Booker have also been dipping into the corporate pool to get money. Ring of Fire’s Farron Cousins discusses this.

Not that long ago I talked about all of the unforced errors that we have seen Democratic presidential candidates commit, uh, during this, uh, primary, which is still basically in its infancy and unfortunately there still more errors that Democrats are committing. Uh, and this one is actually a little more egregious. The ones I spoke about in the past. We’re just kind of harmless errors, you know, flubs screw ups, mess ups, those have been righted. All right. Everybody was on a good path, I guess kind of, unless you look at their policies, but nonetheless, people weren’t as out there saying or doing stupid things. But what’s happening right now, and we know this according to the disclosure forms that came out a week ago, is that we have some Democratic candidates who have pledged to not take any lobbyist money, no pack money, no corporate money, and they’ve been breaking those pledges.

Now these pledges are completely voluntary. They’re not legally binding. It’s just a good faith effort to show the American public the democratic base that, hey, I’m not going to be bought and paid for by corporations or by lobbyist. I’m going to rule for you, the people if I were to get elected, and so far we’ve got three at least who signed this pledge and then turn right around and took some corporate pac money, some lobbyist money. Those three people happen to be Kahmilah Harris, Beto O’rourke and Cory booker. Now, to his credit, Cory booker actually seems to have found a bit of a loophole because he said, I’m not going to take any money from federal lobbyists and he hasn’t taken any money from federal lobbyists, but he has taken a lot of money from, from state lobbyists. But I guess in bookers book there’s a difference.

I said federal, and I’m not taking any money from federal, but you should have read the fine print because I’ve got a lot of state lobbyists that just love me. Camilla Harris is actually one of the worst in terms of the money she’s taken. Uh, according to Lee Fong over here at the intercept, she’s a collected donations from registered corporate lobbyists and South Carolina and New York, California. Uh, and some of those, you got lobbyists for Google. You’ve got lobbyists for pipeline companies that want to build more oil pipelines here in the United States. Um, hedge fund managers, you know, finance ears, the people who helped destroy the economy. Those are the people that Comma Harris is getting money from. Um, Beto O’Rourke stake in, uh, money from Chevron lobbyists, oil company, lobbyists. So there goes that. And also it’s worth noting that earlier this week it was revealed that he would not be signing onto the no fossil fuel money pledge and all of them along with south bend, Mayor Pete Buttigieg have taken money from Jay Carney, the former Obama press secretary, who later became a lobbyist, basically the chief lobbyist for Amazon.

Yeah. So Booker, O’Rourke, Harris and Buttigieg, all taking money from Amazon’s chief lobbyist. Here’s the thing, and this is why this is important. We have so many Democrats running for president right now and by the end of the week, we’re going to have even more Democrats running for president. Probably by the end of next week there’ll be even more. Cause everybody’s throwing their hat and then hell yeah, bring it. The more the merrier because this gives us a better opportunity to vet each and every one of these people and make an informed choice. And right now the way this country is, this has nothing to do with Trump, but the way this country is, we cannot afford to elect someone who is going to lie to us about taking corporate money. And I’ll go even one step forward. We can’t afford to elect someone who’s going to take corporate money. We can. Those days are done. You had a good run, your raised millions of dollars. Corporations spent billions of dollars, but corporations are killing us. And I mean that in the most literal sense possible, the healthcare industry is killing American citizens. Pharmaceutical companies are killing us both with their prices and with their products that they’re not having tested. Chemical companies are killing us slowly with cancer in other intercurrent diseases.

All of these companies are giving money to politicians left, right center and everything in between, but not to everybody. There are a few exceptions and some of those exceptions are actually running for president right now, and those are the people I’m going to put my faith behind. So unless these four candidates that I’ve mentioned here, Harris, Booker, O’Rourke, and boutique edge, unless, they return all of that lobbyist money and don’t take another dime unless they return all the PAC money and stick to their pledge.

That’s a deal breaker for me. I’m done. I will not get behind any one of these people if they continue to take corporate money. The influence is too great. The damage these corporations do is too great to put any faith in. Somebody who thinks, you know what, maybe it’s okay if I get a couple dollars from them. I’m sure I can work out some kind of deal to where I don’t interfere with them too much if I’m elected, but I can pay lip service to my voters who think I’m going to do something. We just went through eight years of that. I’m not going to go through another four.