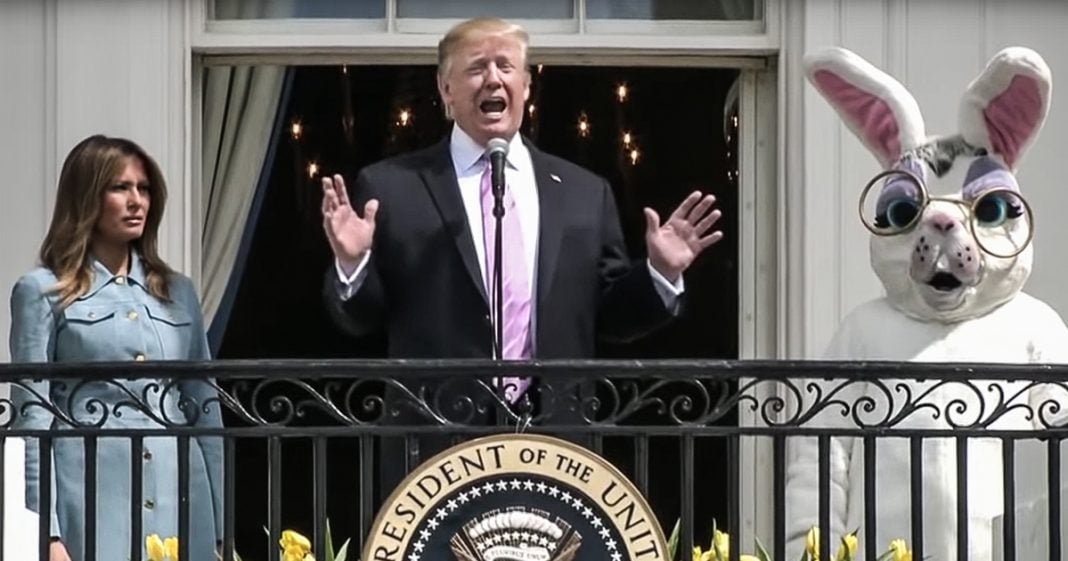 For the second year in a row, Donald Trump delivered a rambling, incoherent mess of a speech to children at the White House Easter Egg Roll event on Monday, apparently forgetting that the people in the crowd were just there to have fun with their kids. Trump consistently fails at the most basic human activities, especially when it comes to children. Ring of Fire’s Farron Cousins discusses this.

Donald Trump:                    And a group of people that do a wonderful job. I love them. I know they like me too. It’s the egg farmers of this country, the egg farmers, and they brought thousands and thousands of eggs. I Dunno if you can use them all, but I have a feeling with these young, very ambitious children, they’re going to find a reason. They’ll be gone. They’ll all be gone. And maybe most importantly, I want to wish everybody a very happy Easter. Our country is doing fantastically well. Probably the best it’s ever done economically. We’re setting records on stock markets were setting records with jobs and unemployment numbers are the lowest they’ve ever been. 50 years in many groups in historically the lowest numbers we’ve ever had. Regulations, low taxes. Our country has never done better and do we love our military. Our military is building is literally being completely rebuilt.

We are completely rebuilding our military. It was very depleted. As you know, a lot of the military folks can tell you and it is being rebuilt to a level that we have never seen before. All with great product, the best product in the world. And you know where it’s made in the USA, that’s where it’s made. It’s all made right here. So again, happy Easter, enjoy yourselves. And I’m coming down right now to be with you. First Lady is coming with me and maybe I’ll get this great Easter bunny to come with us. Thank you very much everybody. Happy Easter.

Farron Cousins:                   So there it is and I think it’s very appropriate that the Easter bunny they use just kind of has that permanently stunned look on its face. That yeah, because that’s pretty much what everybody in the crowd probably looked like. Donald first rule of public speaking is know your audience and you were talking mainly kids. Okay. Children, they don’t care about the economy. They don’t care about the military, they don’t care about the stock market. What they care about are the eggs that are going to go roll and find and the candy they’re going to eat afterwards. There they’re there to have fun. And I know you tried to make the lighthearted joke, oh, we’ve been doing this for 141 years. I wasn’t. I don’t remember the first one. Hey, it kind of fell, but you don’t have very good delivery. But nonetheless, man, keep it light.

Keep it simple. Stop talking about things that these children don’t even understand, but more importantly, you’re also lying to them. The economy is not doing fantastic. It’s fantastic if you’re in the top 1%, everybody else still struggling to get by. Not to mention the fact that you did kind of devolve into this really incoherent part of your speech here where you said, and I quote, and do, we love our military. Our military is building. It’s literally being completely rebuilt all with great product, the best product in the world, and you know where it’s made in the USA. None of those things, or even a complete thought, let alone a complete sentence and all you’re doing is confusing and scaring the children and obviously your wife standing behind you as well who really didn’t understand anything you were saying. So again, best case scenario, you got at least one more year of this, right?

Because you’re going to have to do it next year. Leave politics out of it for one day. Don’t make an embarrassment of yourself and this entire country and just tell the kids, go out there, have fun. I’m going to roll around in the grass with you, whatever it takes, and we’re going to get a new Easter bunny because this one’s really starting to creep everybody out. That’s all you have to do. But for the second year in a row, maybe even the third, I don’t remember your first one very well, but you failed at being a decent human being because you talked over the heads of these children using language that was actually well below them. Not sure how you manage to do both at the same time, but somehow you managed to pull it off.