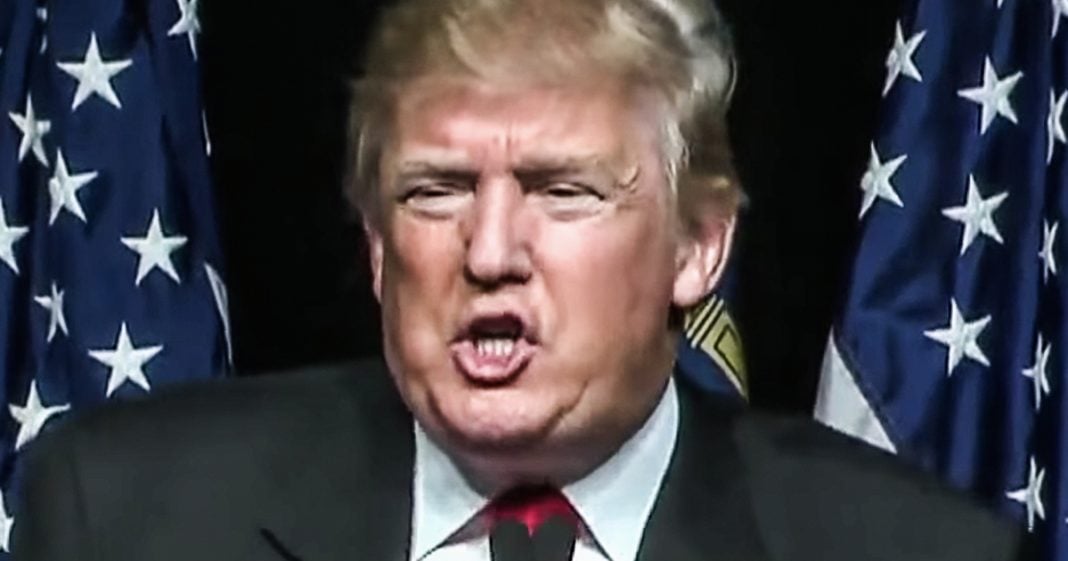 Donald Trump spent Tuesday morning raging on Twitter, and one of his Twitter rants happened to be about Twitter itself. Trump believes that he is being repressed on the social media network and wants Congress to come up with answers as to why his tweets are not getting enough likes and shares for him. Ring of Fire’s Farron Cousins explains why this non-issue has completely consumed the President and why it is so harmful.

Donald Trump spent most of Tuesday morning raging on Twitter, but in one of his Twitter tirades, he actually turned his rage towards Twitter itself based on something that a Fox News host recently said. Here’s what Trump tweeted out, said, the best thing that happened to Twitter is Donald Trump, and that is from @MariaBartiromo. So true. But they don’t treat me well as a Republican, very discriminatory, hard for people to sign on, constantly taking people off list. Big complaints from many people, different names, over 100 million, but should be much higher than that. If Twitter wasn’t playing their political games, no wonder Congress wants to get involved and they should, must be more and fairer companies to get the word out.

This is literally a senior citizen yelling at technology because he doesn’t understand it. And I do not mean any offense to senior citizens, but seriously, we have an old man sitting in the White House mad at Twitter because he doesn’t understand it hard for people to sign on. What? What does that mean? They can’t log into their accounts, Donald, because we haven’t seen any mass kind of, I can’t log into my account. I’m locked out. No, Twitter does suspend people for violating their rules in terms of service, which should happen to you, but they have actually agreed that they’re not going to do that to you because your tweets are of public interest, which is stupid rationale. They should suspend you. They should ban you. This should bar you, or at the very least, take away a little blue check mark, but they’re not going to do that. You see, Donald, while you’re sitting there complaining about Twitter, allegedly being unfair, they’re actually being more fair or in your words, fair to you, then they are to anybody else. Because if any one of us out here in the regular world were to tweet out some of the nonsensical attacks that you tweet out to individual human beings, we would immediately get suspended. How we knew. Get suspended. You see it every day. Okay, but you, because of your position of power, hmm.

Don’t have to be subjected to the same rules as everybody else and yet you still want to complain about it. That’s still not good enough for you. I don’t know what’s wrong with you, but I know something is wrong with you. But let me tell you when your biggest problem is that you don’t have as many Twitter followers as you would like or your last tweet didn’t get as many retweets as you felt it should. If that’s the biggest thing you have to worry about in the world, then you are the luckiest human being on the planet because the rest of us are worried about real things. Climate change depending economic collapse that economists continued to warn us about the fact that the middle class and the underclass, our tax is actually went up when you told us they would go down between four and $9,000. You know, going to work everyday, living paycheck to paycheck, wondering how we’re going to pay for, uh, you know, graduation for our kids, for birthdays, things like that.

That those are the worries that the rest of us have. You are worried that you don’t have enough Twitter followers. Now, as the leader of the free world, I would think you would have bigger things to worry about in that Congress would have better things to do. Then look at why Donald Trump’s tweets aren’t getting enough likes, but apparently that’s what you think they should be spending time on. Congress needs to investigate this. You say, no, Congress needs to do their job, and the only thing they need to be investigating right now is your corrupt financial trail. That for some reason you’ve decided to sue them for going after, but when it comes to your Twitter feed, you’re the only person who thinks that that is a priority. Same thing with everybody’s Twitter feed on the planet. Nobody really cares about it except for you.