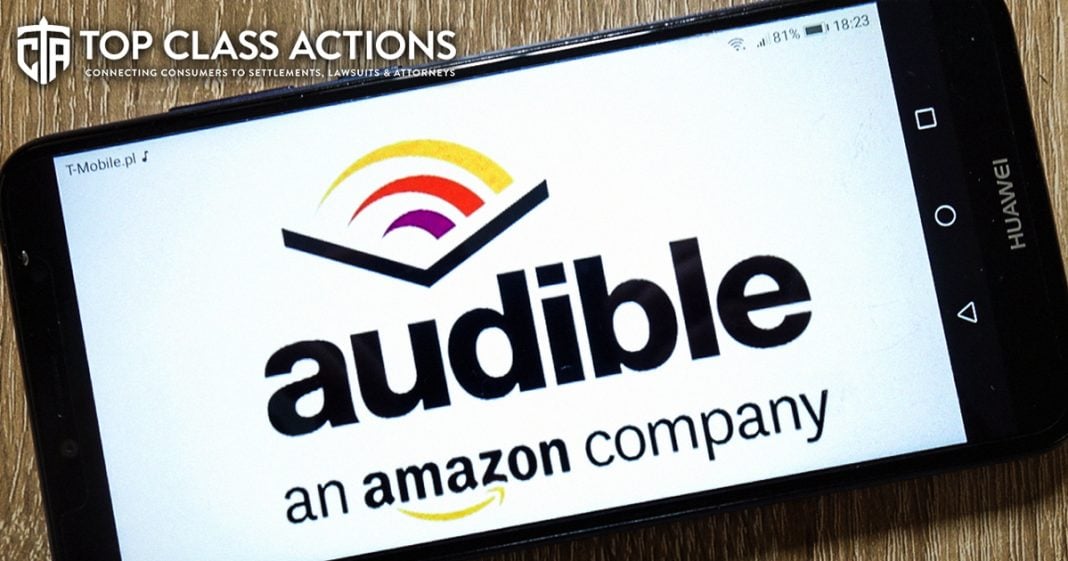 Audible will give out 12 million free audiobooks to end class action lawsuits accusing the Amazon company of cheating users out of earned credits and violating gift card laws. Under the terms of the audio book credit deal, 8.4 million users will also be reimbursed for overdraft fees they were charged when the company allegedly applied charges to a back up credit or debit card without authorization. Ring of Fire’s Farron Cousins discusses this with Scott Hardy from Top Class Actions.

Farron Cousins:                  Over the last few years, more and more services have popped up where you pay a couple bucks each month, you get access to unlimited audiobooks. You get Pandora, you get Spotify, you get Amazon prime, you get whatever it is, your monthly service for just a few dollars a month. And eventually you subscribed to enough things, you start not paying attention to exactly how much is being taken out of your account and that can always get you into trouble just as it did with Audible recently.

Audible has recently actually agreed to a settlement for consumers partly over the fact that they were overcharging them for their service by charging their secondary forms of payment. Joining me now to talk about this is Scott Hardy from Top Class Actions. Scott, you’ve got Audible, it’s a company owned by Amazon, also not known to be a fully honest broker here. What happened with this Audible lawsuit?

Scott Hardy:                          So this Audible lawsuit has been going on for a couple of years now and it centers around how Amazon or Audible at the time would go ahead and offer you credits. So it would say, hey, we noticed you just bought this book. You can get the Audible version for free and here are some credits to use towards free audiblebooks. But they weren’t exactly clear on if you’re going to sign up for an Audible subscription. If you use up your Audible credits to, on different books when you’ll start getting charged.

And the class action said that because these things weren’t clear to the end users and consumers that credit cards were getting charged for Audible credits, and without being authorized. And that backup credit cards on Amazon accounts were being charged. And this could cause not just charges to people’s accounts but overdrafts. And that’s what this sticky, this, this, this real sticky settlement actually covers. It’s not just going to be giving away free audiobooks to people, but it is going to be putting some money back in people’s accounts if they were charged for overdrafts due to Audible charges hitting their credit cards without their authorization.

Farron Cousins:                  And this is 18 months of litigation here. 18 months, I mean a year and a half of actual litigation on this issue that that is a lot of hard work and that just shows, you know, some people will, will look at some of these stories and they say, well, what’s the big deal, why is this an issue? Well it’s an issue because people got taken advantage of. People, you know, had money taken out of their account they didn’t authorize. If you end up with overdraft fees, it’s a whole new nightmare.

Suddenly you think you have money in your account that you don’t, now you’re charged extra. And that’s why these, these lawyers work on this. It’s not because they think there’s a big payday at the end of the road. A lot of times with some of these suits there, there really isn’t. And the, these lawyers spent over a year and a half trying to get this big settlement for the victims here for something, you know, Audible and I, and I think people need to understand that a little bit more and appreciate that a little bit more.

The, the, these lawyers, the people that have been demonized in the media, the butt of jokes from, you know, second rate comedians for decades. These folks are putting in so much work to make these things happen. And they rarely, if ever, get the recognition that they deserve for fighting this hard for taking up this fight that a lot of other, you know, high priced, you know, big Wall Street type lawyers would look at and say, oh, this is stupid. Get out of my office. No, they’re out there fighting for the consumers, whether it’s over $20 or $20 million. A lot of lawyers don’t see the difference. They see somebody that was wronged and they want to help make it right.

Scott Hardy:                          Exactly. They’re fighting the good fight here because they don’t get paid unless they win and that there’s some kind of settlement. And so you get class actions that are thrown out every single day. And those lawyers have spent tens of thousands, if not hundreds of thousands of dollars or millions of dollars during these cases in litigating them. So it’s a very high risk business. And in this case, we’ll want to make sure that if this happened to you, you were an Audible subscriber.

Check your email, you will receive an email from Amazon and or Audible talking about how to submit your claims and of course we’ll cover it on Top Class Actions, but especially if you were charged for Audible and it caused your credit card or your debit card to bounce because of overdraft fees, you’ll want to take a look, spend a few minutes with your checking account, with your credit cards, grabbing those statements because if you submit that proof showing that they charge, they caused these overdrafts, you’ll be able to get a much more significant payout from this settlement if you do your homework.

Farron Cousins:                  Absolutely, and in order to do your homework, you need to follow the link in the description of this video. Go to topclassactions.com they’ve got all of the information that you could possibly need right there. Follow the link, there it is, and while you’re there, sign up for their weekly newsletter and get all of the stories that we discuss plus countless others delivered directly to your inbox each and every week. Scott Hardy, Top Class Actions. Thank you very much for talking with us.