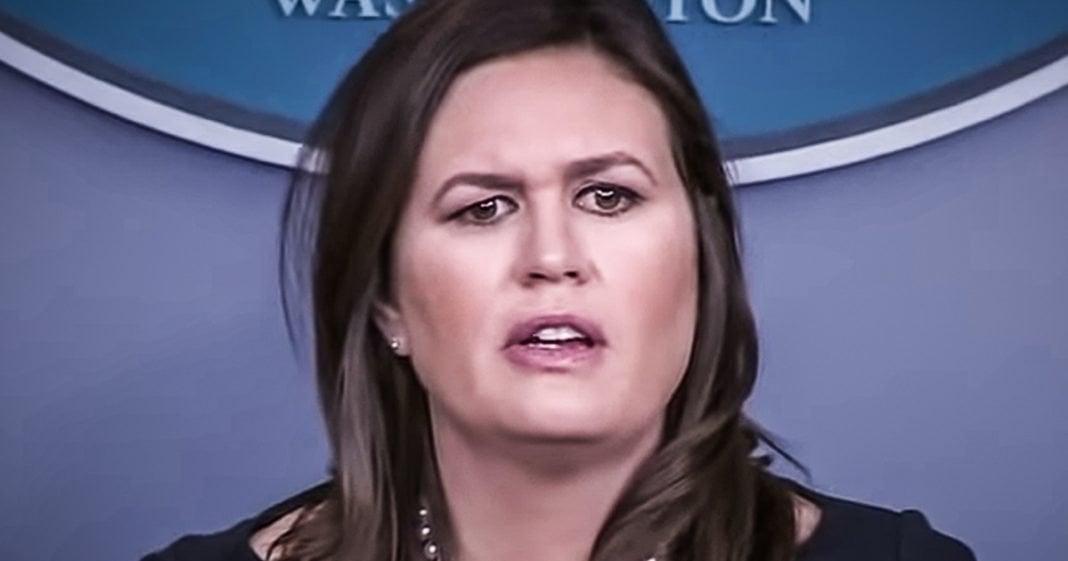 Sarah Huckabee Sanders has been busted lying too many times to count, but the lies that she told to the special prosecutor are extremely egregious. These lies show that she is willing to do whatever it takes to protect the President and that she has no loyalty to the rule of law in the United States. Ring of Fire’s Farron Cousins discusses this.

Sarah Huckabee Sanders telling a few lies is not necessarily news anymore. It’s what we expect from her. That’s what she’s been doing since the day she entered the White House and probably every day of her life prior to joining the Trump administration. It’s just who she is as a person. It’s probably because of her upbringing, because Mike Huckabee, her father is also a horrible human being, but nonetheless, the lies that were recently revealed by Sarah Huckabee Sanders are particularly egregious because she lied to the Special Prosecutor’s office and then she had to go back later and we found this out from the heavily redacted Muller report. She had to go back later and clarify her statements and tried to write off her lies, one as a slip of the tongue and then two by saying, hey, it was just the heat of the moment, right? No, you’re, you’re a pathological liar. You have something psychologically wrong with you.

Some kind of aversion to the truth and you lied to the prosecutors to protect Donald Trump. Donald Trump is more important to you, Sarah. Then the rule of law here in the United States. That’s what you proved and that’s why these lies are basically set apart from all of the other disgusting lies that you have told. I, let’s face it, every press secretary lies, you know, maybe not as frequently as Huckabee Sanders does, but all of them have to get up there and say things they know are not true. Maybe it’s something minor like, hey, things are going great today when in fact things are not going great today. Or maybe it’s a lie about policy, which is a little more extreme and that’s what Sarah Huckabee Sanders likes to do. But again, with these lies she told the special prosecutor’s office, particularly that she was being told by FBI agents all over the place that they were so happy.

James Comey was fired, man, he was a plague on the FBI and then she had to go back and tell the special prosecutor, yeah, that wasn’t true. That was based on nothing. I made it up in the heat of the moment. Slip of the tongue, oops by, and then to make matters worse, she goes on Sean Hannity’s program at the end of the last week to just defend it all it say, yeah, I got you riled up there, and I was lying to people in a very calm setting. The heat of the moment. She says, that makes no sense whatsoever, and it’s equally as disgusting for Fox News. Yet not surprising that they would let her come on and dismiss her lies. She has no problem lying folks. And that’s what’s so dangerous about this woman. That’s why she is so disgusting, because she lies all the time. She lives for no reason.

She lies to protect her boss and she lives because she clearly doesn’t like this country very much. Just a few of the people in it, and that is a problem. Sarah Huckabee Sanders lied to investigators. Many members of the Trump administration lied to investigators. They said so in the mauler report. In fact, the conclusion of the report that Republicans seem to be overlooking is that they actually couldn’t come to the conclusion that there was collusion because all of Trump’s people lied so much that they couldn’t get any accurate information out of them to finish connecting the dots, not to connect the dots, to finish connecting the dots, which leads to a, leads us to believe that the special prosecutor’s office knew that something took place. They were just unfortunately unable to establish the remaining evidence to prove it beyond a reasonable doubt because of people like Sarah Huckabee, Sanders, and literally everyone else that Trump has surrounded himself with in that White House. They’re all liars. They’re all crooks, and they all need to be removed from office. But as a start, I think Sarah Huckabee Sanders, I think her time ran out in that White House about a year ago.