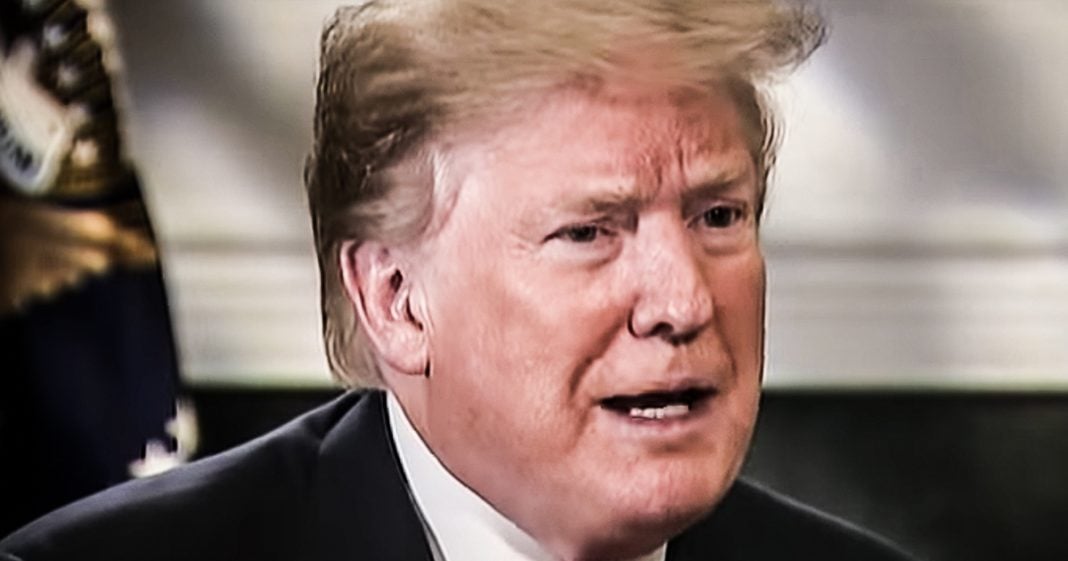 Donald Trump’s approval rating has fallen to a dismal 37% following the release of the heavily redacted Mueller Report. He spent the entire weekend rage tweeting about the report, even though he also claims that he has been totally exonerated. His actions and words don’t coalesce and the American public completely understands that. Ring of Fire’s Farron Cousins discusses this.

So ever since the room, heavily redacted version of the Mahler report came out this past Thursday. Donald Trump, his children, his administration, his a Fox News host, they have all been telling us, hell yeah, it’s over. We won. No collusion, no obstruction, no crimes. Everybody’s clean. Great. We’re good to go. We’re going to keep moving forward, make America great again, keep America great. We’re just the best ever. There’s actually only a small group of people that actually believe that and it’s pretty much the people. I just add, the president, his family has a staffers and the people at Fox News because the rest of the country ain’t buying it, and I love that. You know, it’s not very often we get to talk about stories where it’s like how Yag way to go, American public, you understand, you see through the nonsense, but this is one of those, because guess what’s happened in the few short days since the Muller report came out, the heavily redacted Mueller report came out.

Donald Trump’s approval rating has fallen three points to a year long, low. He has not hit 37% approval in the year 2019 but dammit, he’s hit it now because the American public doesn’t believe anything he’s saying about the Muller report. In fact, back in March, only 49% of people in this country said that, uh, you know, the Muller report was really going to say that somebody broke the law within the Trump administration. After seeing it, that number jumped to 68% here it is a, when asked if the Mueller report has changed their mind, 68% said they were more likely to believe that president Trump or someone close to him broke the law. Again. That number was 49% just a month ago. Now it’s up to 68% so the American public as redacted as it was, looked at that report and said, Oh dude, you, you broke the law or someone close to you broke the law.

And in fact, the report does tell us in the parts we can see that are blacked out, that he tried to break the law, that his son tried to break the law, that his son in law tried to break the law. It basically just came to the conclusion that they were all too stupid to put the pieces together to know how to do it. Donald Trump, jr and Jared Cushner went to that Trump tower meeting with the intent of colluding. They did. The report says that it’s, is that an Italian vessel needs Kaia wasn’t in a colluding mood, I guess. And so it didn’t happen. And junior wasn’t happy. Cushner wasn’t happy, but that was their intent. There. There’s at least 10 specific instances where you Donald committed obstruction of justice and the American people see that. They don’t like William Barr. They don’t trust William Barr. They don’t what William Barr has said, and they don’t trust you.

They don’t like you and you’re losing a hell of a lot of support. But by all means continue tweeting about it. Uh, you’re now up to 18 angry Democrats that allegedly worked on this. You’re attacking Robert Mueller. You’re saying we’re going to investigate Democrats, and only 37% of the public believes your nonsense. 68% of the people polled in this recent poll believe that this report shows that you or someone you love committed a crime. Those numbers are likely going to get up. They’re going to continue climbing, and as long as you keep tweeting out your nonsensical lies about this report, you Donald are going to be the one to keep it alive.