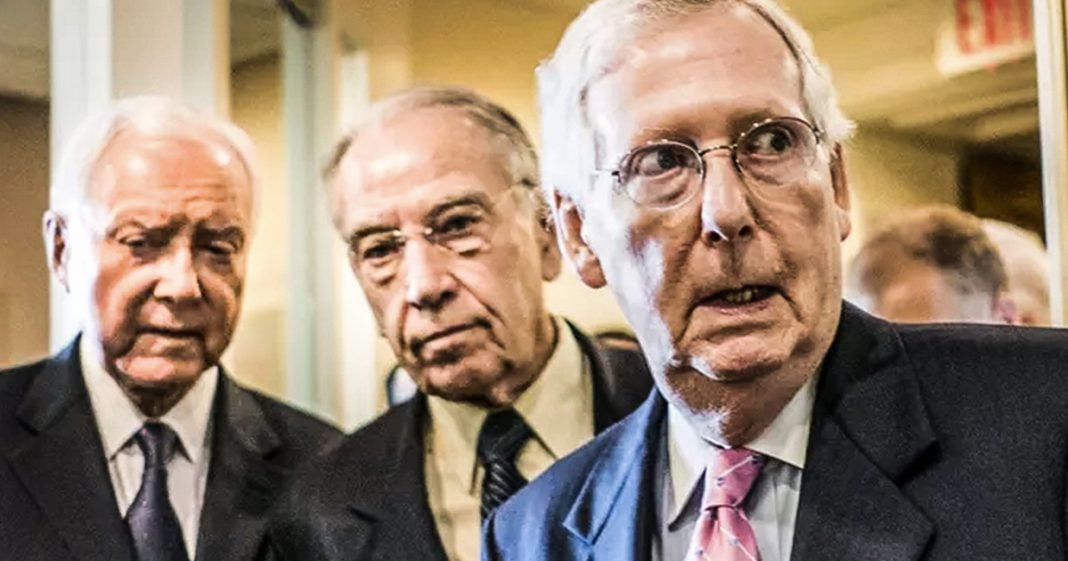 According to the latest round of polling from Gallup, Americans overwhelming support the views and ideas of the Democratic Party over the Republican Party, including on sensitive issues like gun control, abortion, and immigration. The majority of people in this country believe that Democrats are the best Party to handle these issues because the Party’s views align with their own. Will this policy-oriented public let their choices be known at the polls in the next election? Ring of Fire’s Farron Cousins discusses this.

Earlier this week, Gallup came out with a new poll summary that actually pulled polls from many different places to tell us that Republicans are literally doing everything wrong. Now, that’s a pretty remarkable Stape. Gallup didn’t make it in those words. Gallup set it in a much nicer way. They said, oh, well, it looks like the public prefers democratic policies and prefers Democrats handling things. Then they do two Republicans, two, which I would much rather say, which is still true. Republicans are wrong about everything. Let me read you some of these numbers. It’s actually startling. The things that the public’s opinion is reflected in the democratic policies versus the Republican policy. First of all, gun control, 60% of registered voters support stricter gun laws. Here in the United States. 60% of all registered voters, border wall with Mexico, 56% are opposed to building a wall along the entire southern border.

Uh, medicare for all still sits at about 56% of the public abortion. And this is actually according to a Fox News poll, 57% of Americans said that a supreme court should just let roe versus way stand. Only 21% think it should be overturned and that’s from a Fox News viewer pole. And the majority say, yeah, the issue has been settled. Let it happen. Wow. A same sex marriage. 67% of Americans think marriages between same sex couples should be recognized by law everywhere in this country and there shouldn’t be any, any issue with that. That’s certainly not a republican talking point. Daca 83% believe that we should leave doc in place. Uh, 75% of registered voters say that immigrants are a net gain for the United States. They don’t want to shut the borders. They want people coming in 75%. In fact, there’s really only one issue where Republicans held the upper hand and that was the death penalty because yes, apparently Americans do think like, hey, we’re fine with same sex marriage.

We need better gun control. Abortion is cool with us. Yeah, it really doesn’t affect us. We can’t legislate morality. If that is your perceived morality, we need medicare for all two thirds. Say we need to do more to protect the environment, but also at the same time these same people like, yeah, but if you’re in prison we should probably just kill you. Whatever. Doesn’t matter to us. That’s the one thing we agree with the Republicans on is just put them in jail and kill them all. But if you’re not in jail then yes, we should take care of you, we should help you, we should give you civil rights and all that thing. So Eh, low iffy on the death penalty thing. But the rest of this is, is astounding. The public agrees with the Democratic Party. That’s amazing. Even on issues where you’d think there would be a much more even split the abortion thing, the gun control thing. Immigration. Nope. Publix going with the Democrats. The question is at this point now, will the public go with the Democrats?

They have a very clear choice and they have made their opinions and their desires known. Now the next step, really the only step in this that matters is having them show up to the polls and having their voting choices reflect their personal beliefs. And if you think it’s that easy, your wrong, because the Republican party has an amazing way with words and they have this amazing, an enviable ability to get people to vote against their own self interest, to vote against things that they like. So I wouldn’t count on this pole being a slam dunk for the Democratic Party because they’re gonna let Republicans capture the narratives, convince the public that up is down and black is white. Okay? And then this poll suddenly isn’t going to matter whatsoever.