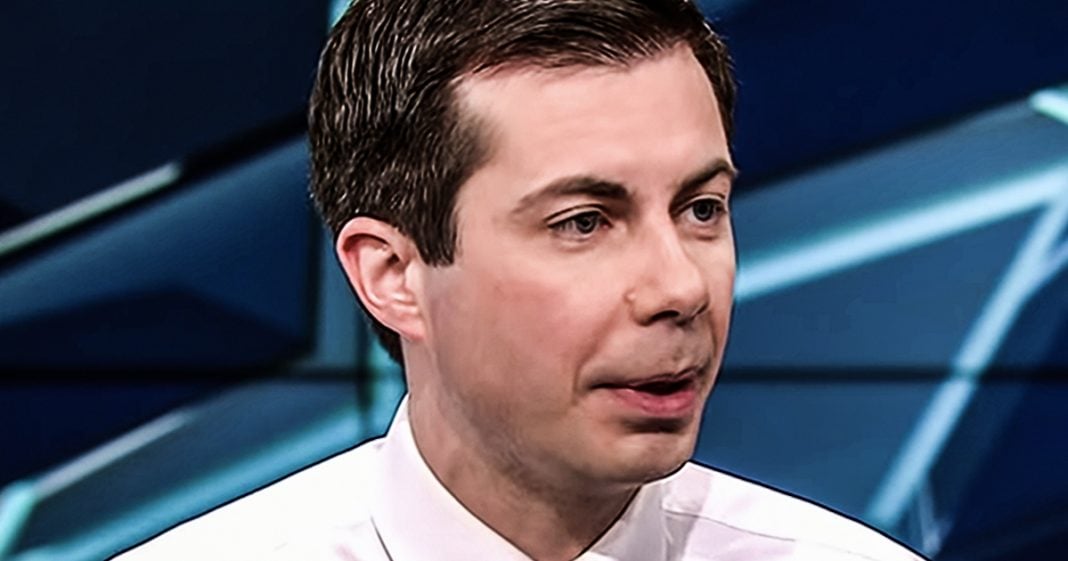 South Bend mayor Pete Buttigieg showed his true colors this past weekend when he decided to compare Bernie Sanders’ supporters to the supporters of Donald Trump. Mayor Pete said that these people all wanted to “blow up” the system because they are being left behind, but that kind of mentality is dangerous. Not only is this not true, but it shows that Pete isn’t advanced enough to understand the suffering of average American citizens. Ring of Fire’s Farron Cousins explains.

Last friday self been mayor Pete Buttigieg was in New Hampshire giving a rousing speech that somehow went completely off the rails. I’m going to read two separate quotes for what Mayor Pete said in his little speech. First he says, I think the sense of anger and disaffection that comes from seeing that the numbers are fine, like unemployment’s low, like all that. Like you said, GDP is growing and yet a lot of neighborhoods and families are living like this recovery never happened. They’re stuck. Damn. That is a powerful statement, Pete. I really hope you don’t screw it up by saying what you said next, which is it just kind of turned you against the system in general and then you’re more likely to want to vote to blow up the system, which could lead you to somebody like Bernie and it could lead you to somebody like Trump and that’s how we got where we are. No, congratulations, Mayor Pete. I officially do not want you anywhere near the 2020 democratic contenders anymore because you’re a piece of crap. Sorry. Truth hurts, right? How dare you try to lump in the people out there fighting for debt Free College for Medicare, for all, for a green new deal, for a living wage to get corporate money out of politics. How dare you compare them to the MAGA hat wearing racists on Donald Trump’s side.

I’m, I’m beyond done and I am beyond furious about this. Now, if you want to talk about some of the supporters, oh, there’s some bad Bernie supporters. Sure. There are just like there’s bad Harris supporters, bad Clinton supporters, bad booker supporters, bad Trump supporters, bad everybody supporters. But that’s not where you went. You took it a step further and you tried to lump all these people in with the extremist. On the other side, there is a lot of economic concern over racial concern of environmental concern on the Bernie Sanders side. There ain’t nothing but hatred over on the Trump side and you went and you basically said that, hey, they’re all the same. They just all want to blow up the system. No. You have people over here on Trump’s side who want to ban certain individuals from being able to come into our country because of their religion or because of the color of their skin. You have people over here who say, hey, people shouldn’t die because they can’t afford their medicine. In what universe is that even close? Is that even comparable? You should be ashamed of yourself. You should be disgusted with yourself. I am and a hell of a lot of people in this country are, and this is not because of some kind of die hard devotion to Bernie Sanders. I don’t have that.

I have a devotion to ideals in a devotion to people. Yeah, you don’t. You had it right man, and that first part of that clip, man you did and then you went and screwed it up and hopefully derailed your entire campaign. You got nothing to offer, but platitudes, you have no ideas. You’re about as much of a disgusting centrist as you could possibly get. You want to go out there and you want to try to bring in those religious right voters by talking about your religion all the time. Those people would string you up if you gave them the opportunity. That’s not how this is gonna work. That’s not how you’re going to win and you’re sure as hell not going to win by attacking half the voters on your own side of the aisle. Good luck with that. Hopefully your campaign ends before we even get to the debates.