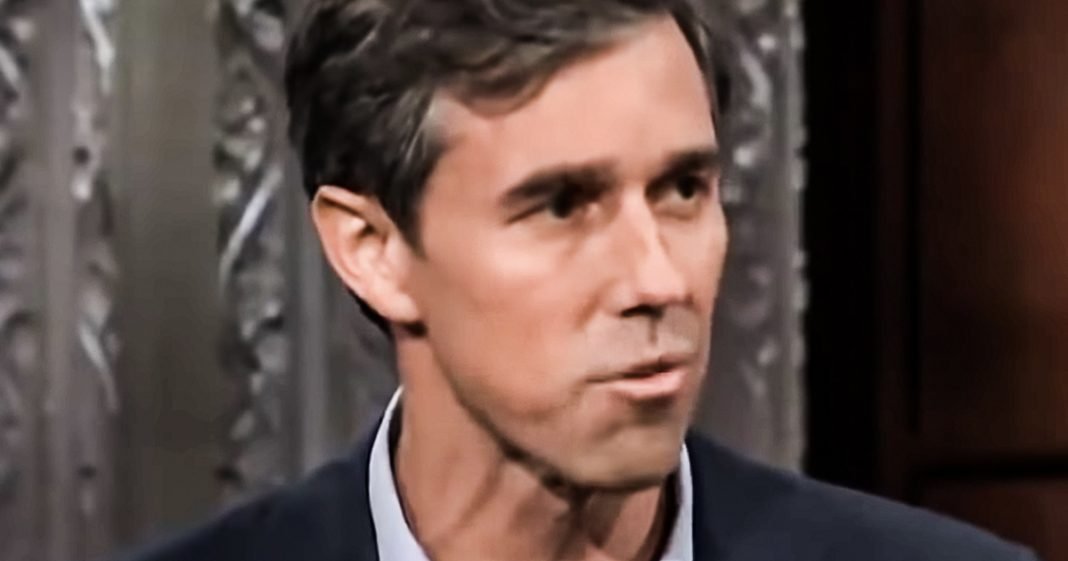 Democratic presidential candidate Beto O’Rourke told members of the Sunrise Movement that he would not be signing onto their “No Fossil Fuel Money” pledge because he still wants to be able to take money from their employees. He swears he won’t take money from PACs or from the businesses themselves, but he still wants to get the cash from the people who work in the industry. This isn’t good enough. We are out of time to fix this planet, and anyone who could even be a little compromised by fossil fuel money is a nonstarter. Ring of Fire’s Farron Cousins discusses this.

Another swing and a miss from Beto O’Rourke, the Democratic presidential, hopeful after he told the sunrise movement, this young activist organization that basically was the brainpower behind the green new deal, gotten the entire country finally talking about climate change and the need to do something about it. Found brave enough politicians in DC to work on this legislation. Okay.

Beto O’Rourke told the sunrise movement recently that he’s not going to sign there. No fossil fuel money pledge. Sorry folks. I know the planet’s burning down, but I don’t want to sign your pledge because I don’t want to offend anybody who works in the oil industry. Here is what the pledge says. This is what Beto O’Rourke refused to sign onto. I pledge not to take contributions from the oil, gas, and coal industry and instead prioritize the health of our families, climate and democracy over fossil fuel industry profits. That’s it. That’s a simple enough statement, right? Not for Beto O’Rourke. No, no, no, no, no. I can’t sign that. Absolutely not in here is why. According to Beto himself, if you work in the oil fields, you answer the phones in the office. If you’re one of my fellow Texans in one of our state’s largest employers, we’re not going to single you out from being able, being unable to participate in our democracy. I, I’m sorry. Better. I didn’t realize that signing that pledge would mean some people couldn’t vote because that’s what you seem to be implying that they can’t participate in our democracy. No, no, no. We participate by voting.

Giving money is a privilege. I don’t give a damn what the Supreme Court says. It’s not a free speech. Yeah, we vote and that is participating. How about you go out and actually fight for the rights of the people who are being denied their ability to participate because they had been purged from voter rolls. Your state of Texas is one of the worst in the country, but instead, instead of going out and fighting for that, instead of getting people’s voting rights restored after they’ve served their prison sentences. No. You want to coddle the fossil fuel industry. Why? Because you want their money. That’s the bottom line because you want their money. Now, Beto has said he hasn’t signed a pledge on any of this, but he says he’s not going to take any money from the businesses themselves, from the fossil fuels superPACs or from fossil fuel executives.

But you’ll take money from everybody else in the industry who, whether they mean to or not, are contributing to the problem. Beto or you do understand that, right? You can’t just write these people off as well. They’re just following orders because we know how dangerous slippery slope is, right? They’re actively participating in it. And Yeah, a job’s a job and everybody needs a job, but we also have a moral choice when it comes to choosing a job. And I don’t mean to demonize or villainize anyone in the fossil fuel industry, but you are working for evil people who’ve tried to cover up the dangers of what their product is doing to this planet for decades. Sorry, that’s the truth. Deal with it. Better is done. I’m not voting for bed. I was never going to vote for Beto. But let me tell you not signing on to this pledge and then trying to justify it with your idiotic reasoning here. You’re done. All right. You’d done go home, go back to Texas, retire, do something else, but you were done. I don’t want to see you. I don’t want to hear from you. If you don’t put the interests and the health of this planet and its inhabitants above everything else, then you’re done. And for the record, both Bernie and Warren have signed onto this pledge that Beto refuse to sign.