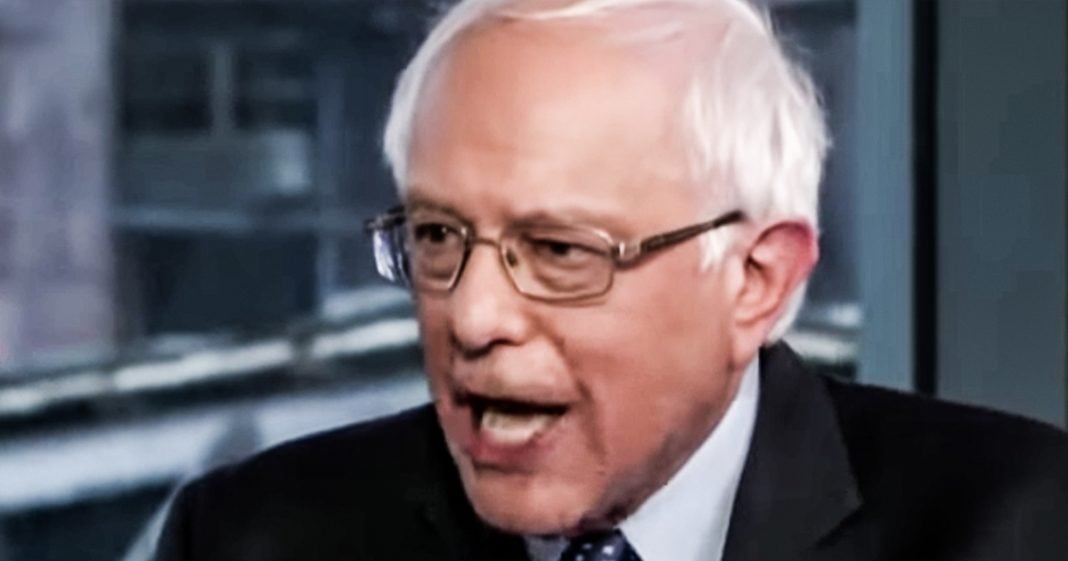 Bernie Sanders is still getting a lot of criticism for his decision to do a town hall on Fox News and give huge ratings to the network, and now that his Democratic counterparts are agreeing to the same thing, more and more Democrats are getting angry. But is this a bad thing? Bernie showed how effective that platform can be, and even got the crowd to cheer for Medicare for All. Should we make a distinction between the hosts and the viewers? Ring of Fire’s Farron Cousins says that, yes, we should.

When Bernie Sanders this past Monday went on Fox News, did his town hall called out Fox News for being horrible, got the people in that audience to cheer for Medicare for All and got the largest ratings of any town hall. So far, this 2020 election season, Democrats were still angry. They didn’t want Bernie to go on Fox News, but other Democratic candidates. After seeing how successful Bernie was and how he was able to speak to those people and how he got them to agree with him in the few days since then, other Democrats are now saying, Hey Fox, right here. I want to do a town hall to, I want to do a town hall. Let me do one. And Democrats are still pissed off. Some of them are because they don’t think democrats should be going on Fox News, especially after DNC chair. Tom Perez says, we’re not going to let that network host a debate.

So I am here to defend the decision of any Democrat to go on Fox News and do a town hall. I agree that the DNC should not agree to do a debate on Fox News, and I said, as I said, two weeks ago, the reason for that is because in a debate, how long do you get for a response? 90 seconds and then it goes on to the next person, the next person, next person, next person. You do not have time to elaborate. You don’t have time to speak directly to people to lay out your plans in a succinct and clear way. You have 90 seconds to throw out some talking points and then it’s on to the next. That is not a good format to actually speak to the public town halls. On the other hand, absolutely a great opportunity, and Bernie showed us that he fought with the host when they were being irrational. He called out the network for its horrible reporting.

And he spoke to those people and he made connections with people he would otherwise not have a chance to reach, and that is what these other Democrats want to get in on and they should. They should because here’s the thing, right now, the reason people are mad that Bernie went on there and other Democrats want to go on there, and I understand it to a degree, is because Fox News is awful. Fox News pushes horrible anti nonwhite people propaganda every day. There are an awful network and the host are absolutely terrible human beings, but at some point we have to understand that those hosts aren’t the audience. And Yeah, trust me, there’s plenty of people in the audience who believed the horrible things that Tucker Carlson says, or Sean Hannity or Ingraham or a judge, Jeanine, whatever it is, they do believe it and they always will.

Well, there are also decent people who watch the network. People who casually watch the network. We can’t just write those people. They’re human beings too. They’re voters as well. And those are the people that Bernie was trying to reach. And you know what he did? That’s why you’ve got Pete Dodge right now saying, I’ll do one Klobuchar saying, count me in. And more and more Democrats saying, you know what? I think I want a piece of this too. I think I see now that it can be successful and yet you still have some folks out there. Uh, Marcus Moulitsas from Daily Coast who says that I think it was good for Bernie personally, but it just shows that he’s not a team player.

He wasn’t a team player. He was the team leader because now everybody’s following him because they saw how successful it could be. So democrats should go and do these town halls on Fox News if they’re prepared to fight, if they’re prepared to hold that network accountable and let the viewers know, not only that the network has lied to them, but that their president has lied to them. That is what Bernie did and he didn’t do it in an insulting way. He didn’t do it in a demeaning way or condescending way. He just told them flat out, look, this is what’s happened and here’s the truth and here’s my plan. And they applauded him for it. A large portion of that Fox News audience is still reachable and we cannot write them off and ignore them and pretend that they don’t exist. Because if we do that, they will join the ranks of the other Fox News viewers who are too far gone to ever come back.