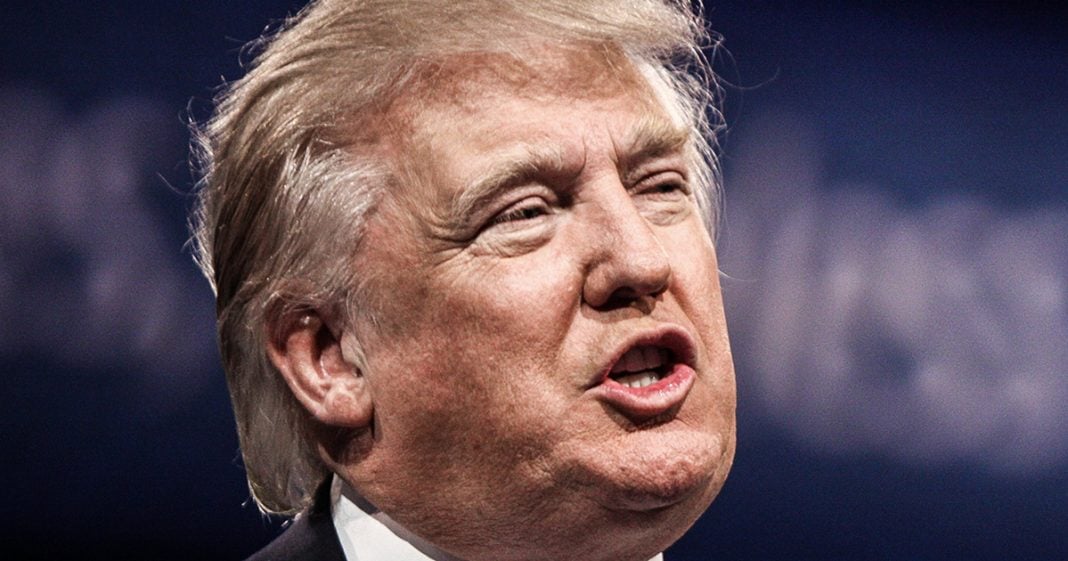 Donald Trump’s Department of Justice should change their name to the Trump Protection Department, because that’s really all they do these days. Their recent argument that Trump Hotels don’t violate the Emoluments Clause of the Constitution is just the latest in a long list of items that the DOJ has been running interference on for Trump. Ring of Fire’s Farron Cousins explains what this DOJ has done to the rule of law.

Here in the United States, we really don’t have a department of justice anymore. What we have is basically a department of interference because that is what the DOJ has become on behalf of Donald Trump. It is the department of defending Trump. Here’s what’s happening right now, and we had discussed this about a week or so ago. We have the DOJ lawyers for the president right now arguing in court that the emoluments clause does not apply to him when taking money from foreign dignitaries or officials who stay in his hotels here in the United States or anywhere across the world, that doesn’t count as an a monument according to the Justice Department.

When the constitution says, yeah, that counts as in the monument, he is getting money from a foreign country, a foreign diplomat of foreign official, whoever they are. That money eventually makes its way back to Donald Trump’s pocket and that is illegal because Congress never gave their expressed consent to allow him to receive that gift. It’s a pretty cut and dry case folks. But Trump’s DOJ is actually in court filing paperwork saying, nope, the president is allowed to own a hotel. It take money from foreign dignitaries when they stay at that hotel. That is not an a monument. And furthermore, it doesn’t just apply to the president of the United States. It applies to all government officials.

If you own a property that you get profits from and foreign officials come and they host an event there and you get all the profits from that, no, totally not in a mall you meant that doesn’t count. Donald Trump can keep us hotels and keep raking in all this cash and foreign officials can continue using his properties because they know that as long as they’re loyal to him and give him money, he’ll do whatever the hell they want him to do. So that’s the other side of the equation that the DOJ doesn’t want to talk about. Everybody knows how to manipulate Donald Trump, give them a little bit of money, go stay at one of his properties. He’ll be wrapped around your finger before the end of the day. Everyone knows how to manipulate this man. And that is a threat that is a threat to national security here in the United States. But the DOJ doesn’t care. They know that, but they don’t care. They’re only job. And Trump’s made sure of this is to protect the president, not protect the country’s, not uphold the laws of the u s constitution, but to protect one single man. And that man is Donald Trump. And they are doing whatever they can to convince the public and the court system that Trump and his officials are above the law. That’s the end game here to make Donald Trump above the law. Okay?

And so far they’re doing a damn good job of it. But here’s the thing. Trump should have been forced to completely divest from any of his companies. He should have been forced to sell off every business that he owns so that he didn’t make a single penny from the Trump organization. As soon as he was sworn in, as president, and I brought this point up a hundred times, I’ll bring it up another thousand times if I have to. But they made Jimmy Carter’s sell his peanut farm because they didn’t want him getting any profits from that or having other people use that as a means to kind of put money in Carter’s pocket. Maybe influenced him a little that way. So the man had to sell his peanut farm. Trump’s got his name on those big gold gaudy hotels all over this planet. And the DOJ thinks there’s nothing wrong with that. Or at least they want the public to think there’s nothing wrong with that, but I’m willing to that behind closed doors, they understand how dangerous it is and how easy their bosses to manipulate. And all you have to do is book a few nights at one of his disgusting hotels.