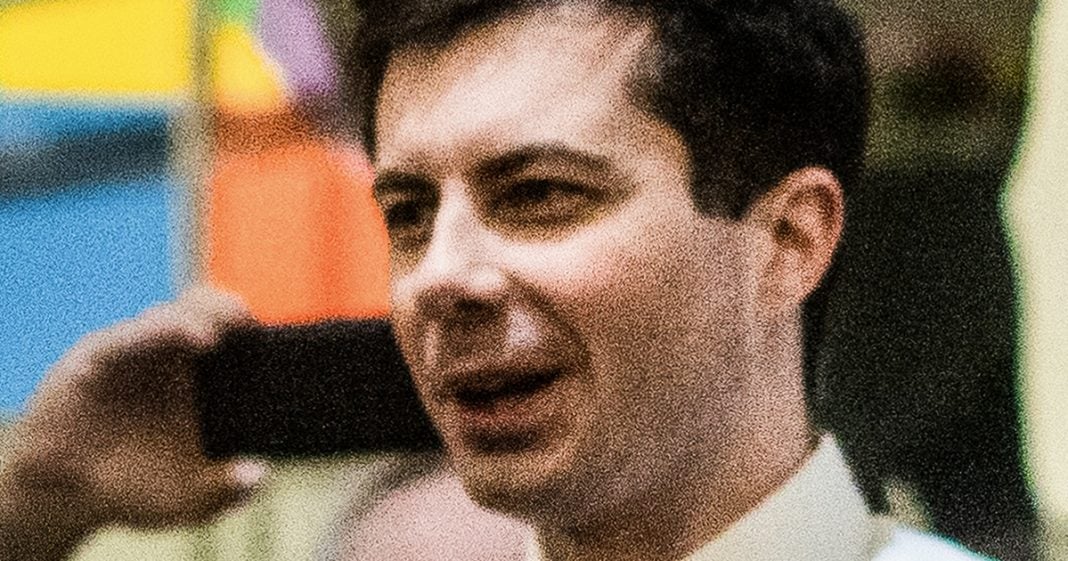 South Bend Mayor Pete Buttigieg has become the latest rising star in the Democratic Party as he seeks the nomination for Presidential candidate, but his latest move isn’t one that we should be thrilled about. His sudden rise to stardom has attracted some big time campaign bundlers, including hedge fund managers and banking lobbyists – the same ones who threw their weight behind Obama and Clinton. Ring of Fire’s Farron Cousins discusses this.

Southbend mayor and current presidential candidate Pete Buttigieg Edge, uh, has been pulling in a lot of money now in his first quarter hall, he got about $7 million. But ever since in these last few weeks that the media has been paying more attention to him. Probably more attention than he deserves. But nonetheless, they’re paying a lot of attention to him and he’s attracting some eyeballs. He’s attracting some very important eyeballs, people who have lots of money and people who know people who have lots of money. According to a new report, Pete Buttigieg edge is actually attracting a lot of people who bundled money, hundreds of thousands of dollars in campaign donations for both Barack Obama and Hillary Clinton, and even some who go as far back as John Kerry bundling money for him. And now all those bundlers are starting to give some money and helping to bundle for mayor Pete on the surface. Maybe this isn’t horrible cause after all, Pete did pledge.

He’s not taking any money from corporate pacs or from corporations or from fossil fuel interests. But unfortunately he didn’t say anything about taking money from executives in these industries. He also didn’t say he wasn’t going to take banking industry money and unfortunately some of these bundlers have either served as lobbyists for major banks or they themselves are actually hedge fund managers and that’s a very real problem for mayor Pete. Actually I take that back. That’s actually not a problem at all for mayor Pete. It’s a problem for the people who are going to be voting because now they have to look at this guy who’s become a rising star. He’s got some good positions on some policies. He is not quite there yet on medicare for all and that is concerning. But taking money from these Wall Street types, from the hedge fund managers, from people who lobbied for Goldman Sachs,

that’s a nonstarter for me. It’s a nonstarter for a lot of progressive’s. It’s a nonstarter for anyone who has had to deal with any of the ramifications from the 20 2007 2008 financial crash and all of the financial scams being run by Wall Street banks during that time. People committed suicide over how badly the bank screwed them over. I think we need to keep that in perspective. I think people need to understand that a little bit better. Big banks rip people off, screwed them out of their life savings out of the retirement funds, out of their homes, and people in this country actually killed themselves because of that. Okay.

Any Democrat who takes money from them, that’s it. I’m done. You’re not getting my vote. You’re not. Those banks have blood on their hands. Those banks still have blood on their hands. Those banks are back to being deregulated to the levels that were prior to 2007 and I don’t care if you’re not taking money directly from Goldman Sachs. If you’re taking money from the people who run Goldman Sachs or who lobby for Goldman Sachs to go out there and do the harmful things that they’re doing, then that’s no different. That’s no different. That’s why when Beto O’Rourke said, I’m not taking fossil fuel money, but I’ll take fossil fuel money from people who work there. There’s really not much difference, folks. There really isn’t. Okay.

Mayor, Pete, as I mentioned, he’s got some good ideas. I don’t disagree with him on most of his issues, but I also don’t think that his going out there and telling us to all get along and let’s be nice and kind and hopeful is a winning message. It was in 2008 until the Obama voters realize, wait, we’re not getting that hope and change. We were promised. People don’t buy into that anymore. Some are buying into it right now and I think that’s foolish. They are forgotten the lessons of 2008 and the ensuing eight years and that’s not meant to be an attack on Obama. He did some great things. He also failed to do a lot of great things that he easily could have done. We don’t want another four years of that and we damn sure don’t want another eight years of that. And I’m afraid that with Pete Buttigieg, that is what we would get.

I have said unpleasant things, but true things about mayor Pete. Now, same thing with Beto. Same thing with Elizabeth Warren. Same thing with Bernie Sanders. Nobody is immune to this. If you screw up, we’re going to call you out because that’s our job. We’re not here to be cheerleaders for any particular candidate. Nobody is, unless you’ve worked for those campaigns, is supposed to be a cheerleader for any particular candidate. The rest of us can report on the truth. We can give our opinions based on fact, but short of that, we will not and have not ever been cheerleaders, and we’re not about to start now, so don’t get angry than in pointing out these sad truths about mayor Pete because it turns out he may not be the shining, rising star of the Democratic Party like a lot of people thought he was. He may just be another centrist corporate democrat willing to work with some of the most evil corporations in this country if it means winning an election, and that’s not okay.