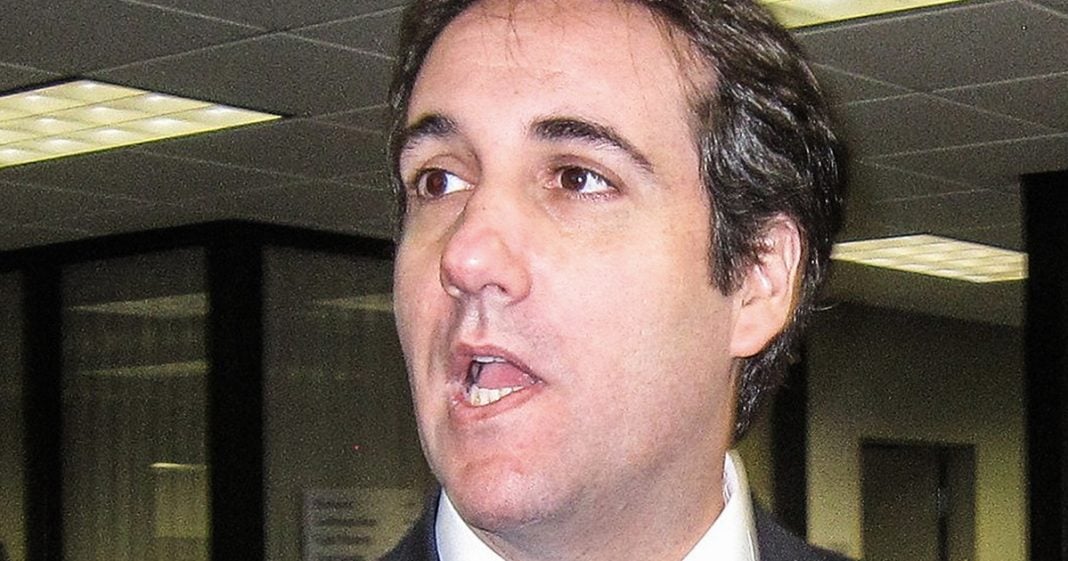 Donald Trump’s former lawyer / fixer Michael Cohen has released a statement through his lawyer that says he’s prepared to fill the public in on the redacted parts of Mueller’s Report that William Barr and the Justice Department released on Thursday. It isn’t clear whether or not Cohen actually knows what all of the blacked out parts are, but he may be the best source for filling in at least some parts of it. However, it could all be a lesson in futility, as Ring of Fire’s Farron Cousins explains.

Even before we got the very heavily redacted Mueller Report on Thursday, Michael Cohen, Donald Trump’s former lawyer slash fixer had already told us that he is going to fill in the public on as much of those redacted portions of the Mueller report as humanly possible. Now, that announcement actually came Wednesday night from Michael Cohen’s attorney, Lanny Davis, to which Michael Cohen also replied, uh, yeah, this is going to happen. In fact, he said, soon I will be ready to address the American people again. Tell it all and tell it myself. Now, this is really interesting because obviously if you’ve gone through the report or seen parts of it, yeah, there is a lot of redactions which runs contrary to what the media had told us the day before, which was, it’s going to be lightly redacted. They’re still making the mistake of trying to take Attorney General William Barr at his word, even though we’ve known for decades that this is a man that cannot be trusted.

It was heavily redacted. Uh, it also though the redactions did tell us that there’s other matters still ongoing, other investigations happening, so it ain’t over. But here’s what we do know, and this is stuff that Michael Cohen may be able to add too, because some of these parts were redacted after the initial statement, but I want to go through just a few of some of the biggest revelations of the Mueller report. First and foremost, Trump panicked when Robert Mueller was appointed, said, uh, he’s “F’ed” this the end of his presidency. I think that’s a pretty substantial statement considering the guy had only been in office for what, five months at that point, not even quite five months yet, and he already knew that because they special prosecutor was appointed, his presidency was done for you. Don’t think that you’re presidency’s done for if you haven’t done something wrong.

Let’s get that out of the way real quick. If you know you’re innocent, you have nothing to worry about. Second thing is, Sarah Huckabee Sanders admitted that she had been lying to the public as part of her testimony when she had previously said publicly that many FBI agents were coming to this administration and saying, we don’t have any faith in James Comey whatsoever. She admitted to the special prosecutor that she had absolutely nothing to base that on because nobody actually said it. A Mueller was not able to prosecute on obstruction because of the office of legal counsel’s memo from back in the day that says don’t indict a sitting president. Oh, it could interfere with the president’s ability to do his job. And that is the only reason Mueller didn’t bring the charges on obstruction of justice. And that is worth noting a, there were 10 instances that we know of from the unredacted portions of obstruction of justice.

Uh, major major interference, uh, in the form of social media campaigns and disinformation campaigns, propaganda campaigns that took place in the 2016 election. Also, something that needs to be addressed prior to the 2020 election. Um, Trump jr and Cushner actually did try to collude, the report concludes they tried to Cologne during that Trump tower meeting, but they failed because they didn’t get the information that they thought. Now they went there with the intention of colluding. Okay. That’s in the damn report. But Natalia vessel needs Kaia didn’t actually want to talk to them about colluding stuff or the Americans were the ones who screwed up there. The Russians were like, no, we actually do want to talk about adoption. So I thought that was pretty interesting, although there’s plenty of interference there to go around. Uh, junior was basically too dumb to know what he’s doing per the report.

Uh, officials lied and misled Robert Mueller, which is why he was unable to reach the conclusion that a lot of us thought he was going to reach. Um, and Michael Cohen and Donald Trump lied to the American public about the Trump tower Moscow project, which in fact was going on well into the campaign and could have easily had been used as leverage against Donald Trump in the 2016 campaign. And that is the kind of thing that Michael Cohen might be able to fill us in on a little bit more. I don’t know how much faith I have in Michael Cohen, but really that doesn’t even matter what this report just told us, unfortunately doesn’t necessarily matter. And I know that may come as a shock for people. Um, but uh, here’s the thing and this thing we’ve been saying for quite awhile, Republicans are never going to vote to remove this man from office. They’re not. That’s kind of the end of the story.

What more can you do? You have to have the numbers and unfortunately the Democrats don’t have the numbers. Republicans are going to continue to spin this as if Donald Trump did nothing wrong and that it was a witch hunt. Even though this report as heavily redacted as it was, uh, kind of shows all those people taking those victory laps. Yeah, you guys were wrong. You guys were dead wrong. So you were calling for the media to apologize. So now I guess it’s time we call for you guys to apologize cause yeah, you were wrong. But you are right in the fact that nothing’s going to happen.

The Democrats have the numbers in the house and that is fantastic. They can impeach him and he will wear that badge of impeachment for the rest of his time in office. But unfortunately without the numbers in the Senate, his time in office could be another six years. Not much we can do about it at this point. And that is what is actually so depressing about the release of this report. Even if we do get our hands on the unredacted version, it’s probably not going to change the minds of those disgusting Republicans sitting over in the Senate.