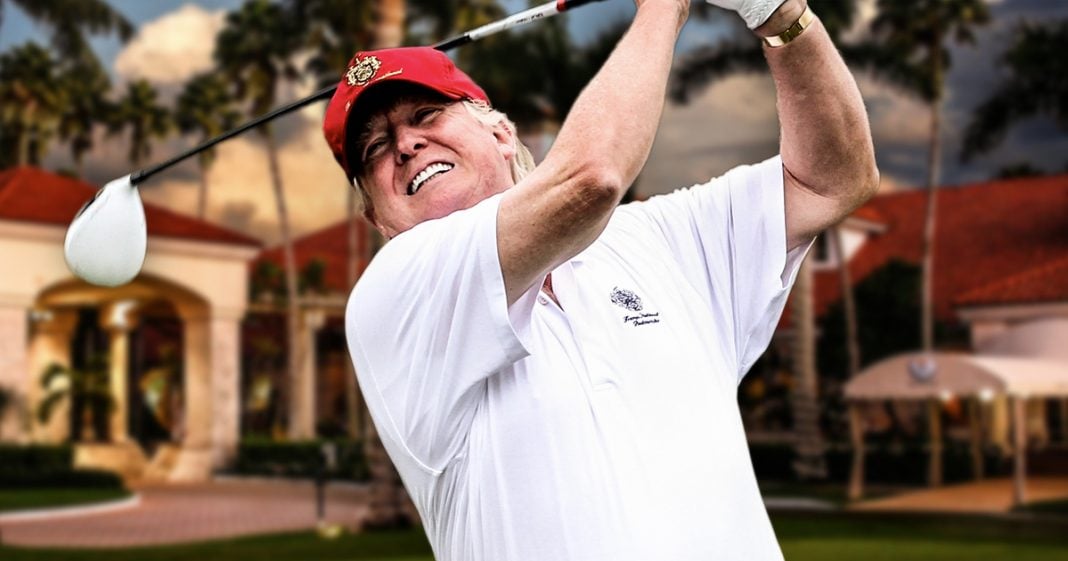 Donald Trump talks a big game about how dangerous immigrants are, but as a businessman he 100% depended on their supply of cheap labor to keep his resorts afloat. But after a report came out earlier this year exposing just how reliant his golf resorts are on undocumented immigrant labor, the Trump Organization has quietly been trying to rid themselves of all workers who aren’t legally allowed to work in this country. Ring of Fire’s Farron Cousins discusses this.

A couple of months ago, reports came out showing us that the Trump organization at several golf courses, resorts, whatever it was they own throughout this country, had been routinely not only hiring undocumented workers, but also helping them falsify documents so that they looked like they were totally legal workers. And now ever since those stories came out and for some reason just died off because I guess nobody cared. Uh, but anyway, in the months since then, Trump’s resorts have quietly been purging themselves of undocumented workers. For example, uh, down in south Florida, Trump’s resort down there, they actually have gotten rid of a few dozen undocumented workers, some of whom had actually been working there for 10 years, for 10 years. Some of these folks had been working there, did not have the paperwork to be legally working in the United States, did not have social security numbers.

And they were there for a decade before anybody even noticed that. Now, doesn’t that sound odd to you? Does it sound odd that immediately after people started looking into this, suddenly we realized, Oh man, the guy, we just celebrated his 10 year anniversary. We bought him a cake. I just realized in human resources, I don’t have a social security number for him to be able to properly pay him. No, no folks, that is not how it works. That’s not how human resources department works. That’s not how issuing paychecks works. First and foremost, I have nothing but sympathy for these undocumented workers who are now finding themselves unemployed and at a very severe risk of deportation because they were technically working illegally.

I don’t blame them. I blame the Trump organization because yes it is 100% their fault. They knew these people were undocumented, but rather than having them go through the correct process, trying to get the visas to allow them to legally work, they just quietly kept them on the payroll. Somehow managed to pay their salaries without ever having to report a social security number, which again, for tax purposes that’s not possible. So I’m just wondering who’s cooking the books down there at Mar-a-Lago that had to have happened in order to be able to pay undocumented workers because you can’t pay a worker and file that in your books if you don’t have a social security number or an employee identification number of business identification number, whatever it, without that official number saying you can legally work in the United States, they can’t properly processed your payment, they can’t file it in their taxes. So this story is not necessarily about the undocumented worker purge. This story is actually much bigger than that. And the question remains, who’s cooking the books at Mar-a-Lago in Bedminster and all these other places so that they could pay these undocumented workers? If you ask me, that kind of seems like the thing that Congress needs to be investigating immediately.