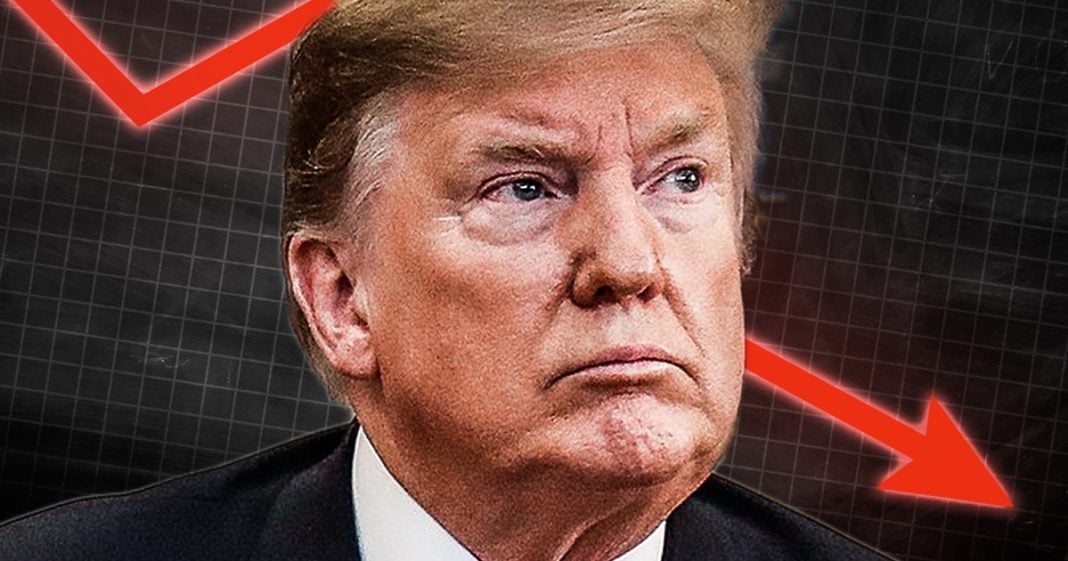 Swing voters – the people who don’t really have a political preference – are turning their back on Donald Trump. According to the latest round of polling by Monmouth, Trump’s approval rating in “swing districts” has fallen to just 31%, which makes it even worse than his approval rating in deep blue districts. You can’t win elections with only your base behind you, as Ring of Fire’s Farron Cousins explains.

On Wednesday of this week, Monmouth University released a new poll that has some really horrible news for Donald Trump. But before we get to those poll results, uh, let’s take a look back. Um, after William Barr released his original summary of the mullah report, it was predicted and we predicted incorrectly that Trump’s poll numbers would probably go up a little bit because of this. It didn’t happen. His polls actually either stayed the same or they dropped a point or two. But this new Monmouth poll this week, which obviously came out prior to the release of the redacted Mueller report, um, it has even worse news for Trump because it’s not just that your poll numbers didn’t go up after the Mahler report. It’s that you’re now starting to lose swing voters. In fact, the report shows Donald Trump is actually less popular among swing voters. The people who don’t necessarily identify with either party, he’s less popular with them.

Then he is in deep blue districts in this country that Hillary Clinton won by more than 10 points. So Democrats are actually slightly more uh, in favor of Trump then swing voters. You can’t win an election if you can’t get those undecided swing voters and independence on your side. And as it stands right now, and I know we’ve got a lot of time before the election, but right now Trump is losing ground with them. He has an overall approval in swing districts of 31% overall approval in districts that Hillary Clinton won by 10% or more of 33% so again, yeah, the Democrats are actually a little bit more okay with Trump then the swing voters, Donald Trump’s base right now is certainly not enough to give him the popular vote or even the electoral vote at this point. It never will be. Actually, he has to win the middle.

But what’s happened to the middle since Donald Trump became president, they’ve gotten a hell of a lot more progressive. They want Medicare for all. They want a $15 minimum wage. They want debt free college. They want action on climate change. Poll after poll after poll after poll, and I could continue saying that forever has shown that even Republicans support those things by a majority. So the middle has moved very far to the left and when they look at this guy Trump and they see that his tariffs have destroyed my business or my neighbor’s business for my dad’s business or my mom’s business, they see that his immigration policies are hurting businesses across this country. They look at their paycheck every other week and they see that they didn’t get a raise from the tax cut, that the real wages are actually falling, but the wealthy elite get to write off the cost of their private jets.

They understand exactly what’s happening right now, we are dealing with a very astute public and they know that Trump is not the answer. Trump is not the solution and Trump is not their guy holding a steady approval rating of about 30% amongst swing voters in the United States will not get him to reelection. And in my personal opinion, I don’t think a year and a half is enough time for him to turn it around. These people have already seen the damage this man was able to do in just two years, and he is showing no signs of reversing course on any of these policies. In fact, on many of them on immigration and terrorists, he’s doubling down. We’ve got $11 billion in new tariffs coming to Europe. It’s not going to work the way he thinks it is. Americans will pay the price, and as these poll numbers indicate, Americans know exactly who to blame for the price they’re paying.