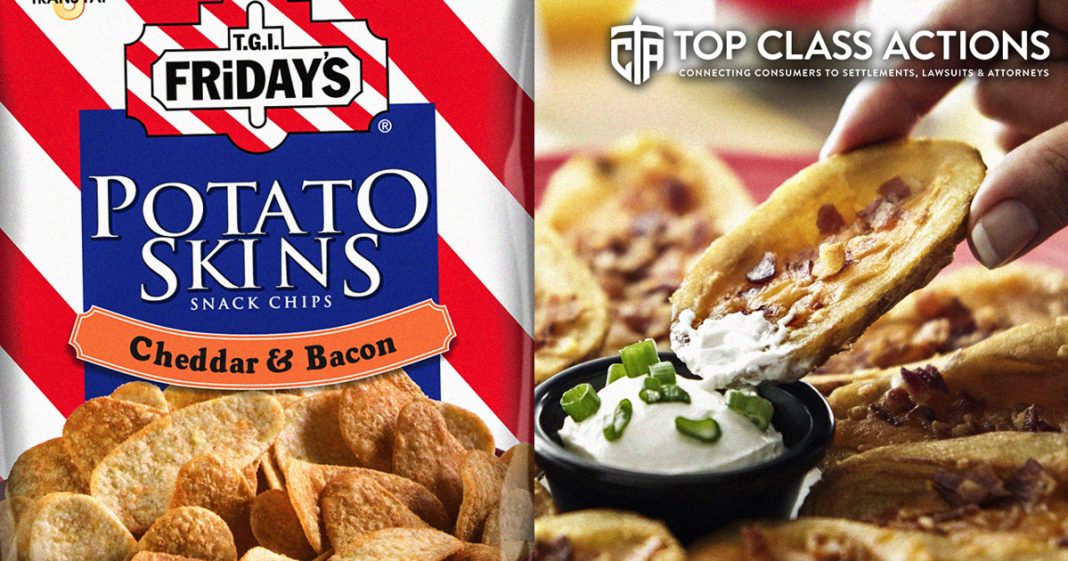 TGI Fridays faces a class action lawsuit alleging the restaurant chain and food company falsely advertises their so-called “Potato Skins” chips as being made from actual potato skins. The TGI Fridays class action claims the plaintiff purchased the snack because she believed it was made from real potato skins and would be healthier than similar potato-based snacks. Ring of Fire’s Farron Cousins discusses this with Scott Hardy from Top Class Actions.

Farron Cousins:                  TGI Friday’s has become one of the most popular casual chain dining restaurants here in the United States. And as their popularity grew, they started to branch off into selling products in grocery stores so you didn’t always just have to go to the restaurant to get their food. But some of those products being sold outside of the chain restaurants starting to call some legal problems for the company. Joining me now to talk about what’s happening is Scott Hardy from Top Class Actions. So Scott, one of the most popular appetizers that they have at TGI Fridays is the potato skins. It’s an actual cut in half potato. You can see the skin, it’s real potato. They also sell potato skins chips out there. Lots of different flavors, but those chips, lot different from the potato skins. Marketed kind of the same way though and that’s getting them into trouble right now. What’s happening?

Farron Cousins:                  And as you pointed out, that is where a lot of the, the plants fiber is. That’s where some of the vitamins are. The rest, the inside, the white part of the potato, that’s the starch. You’re not getting a ton of good stuff from that. So the skin is where the good stuff is. I’m not sure how much of the good stuff remains after going through the frying process like a potato chip does. But there’s still some in there. So if you’re going to call your product potato skins, probably should give us some skins. Now I’m gonna play devil’s advocate here because to me it seems like the company could easily just come out and say no potato skins is the name brand. It’s not meant to be actually a product description. That’s just what we call these things. You know, kind of similar to Red Bull gives you wings is a slogan, not a promise that drinking this drink is actually going to make you grow wings. So how do the, how do the plaintiffs here overcome that if TGI Friday’s tries to counter and say that’s just a product name, not a description? What do they do in that instance?

Scott Hardy:                          Right, and, and really the defendant’s right now are already trying to argue that point as they’re just saying, hey, we’ve got this huge brand, TGI Friday’s potato skins. People love them. People come into our restaurants and eat them up. We’re allowed to use our brand and sell these chips. But if you don’t have any potato skins actually in the chips themselves, then you’re going to have a problem. And there are a lot of all natural or natural potato chip products out there that still have the potato skins attached on it. You know, there’s, you know, the way they slice the chips, they make sure that you are actually getting some skin in the game. But TGI Friday’s is not doing that. TGI Friday’s just taking their potato flakes, squishing them all together, frying them up and then covering them in flavoring. And they might be very tasty, but there are still no potato skins.

Scott Hardy:                          And so we’ll see if this class action actually ends with just an asterisk on the bag and under that asterisk on the back in small print it says no real potato skins. We’ll see. It might, it might not. They might just have to go ahead and say TGI Friday’s potato skin flavored chips. I don’t know. But you know, we’re going to see some kind of new disclaimers on their bags. The chips aren’t going to go away, but you know, we’re going to, they’re going to have to change some form of how they are marketing them. Because you know, as we all know, it’s very unlikely that they will change their entire manufacturing process to actually include some potato skins unless it’s possible to get potato flakes and potato skin flakes and squish them all together. But that might not be very appetizing looking.

Farron Cousins:                  Well and the plaintiffs also, you know, on their side, they’ve got a pretty decent argument considering the fact that when you know, for years, decades actually you’ve been able to go into TGI Friday’s and order potato skins and they know exactly what to expect. You know, as somebody who spent some time actually working at a TGI Fridays, it’s the same thing every single time. There, there’s no variation any day of the week at any given store across the entire country. Those potato skins are the same thing. So when you see a bag of it, why would you expect something different other than that potato skin in the form of a potato chip and they’re not even getting anything close to that when they buy the bag of chips. So I think this one’s going to be interesting. I think both sides actually have very good arguments here. So to me this is going to be one, like you said, we’re probably almost definitely going to see some kind of change in the packaging.

Farron Cousins:                  A change in the manufacturing process, a lot less likely because they’ve already got their formula down. They know what they’re doing and they, you know, each chip comes out identical to the one before it. There’s no variation even in the shape of these potato chips. So I, I think they’re set in their ways. The only thing we can hope for is maybe some restitution for these plaintiffs and hopefully a change in the packaging and a change in the marketing. You know, sometimes that’s the best you can hope for is that they change how they market it. But hopefully the plaintiffs in this case will be the ones who prevail at the end of the day.

Scott Hardy:                          Exactly. Let’s just see how this case plays out in court. But you know, I think that we’ll end up seeing a small change to the label and then hopefully some cash back to those dedicated TGI Friday’s potato skin chip fans.

Farron Cousins:                  Absolutely. For more information about this issue, follow the link in the description of this video. Head over to Top Class Actions and while you’re there, sign up for their weekly newsletter. Scott Hardy, Top Class Actions. Thank you very much for talking with us today.