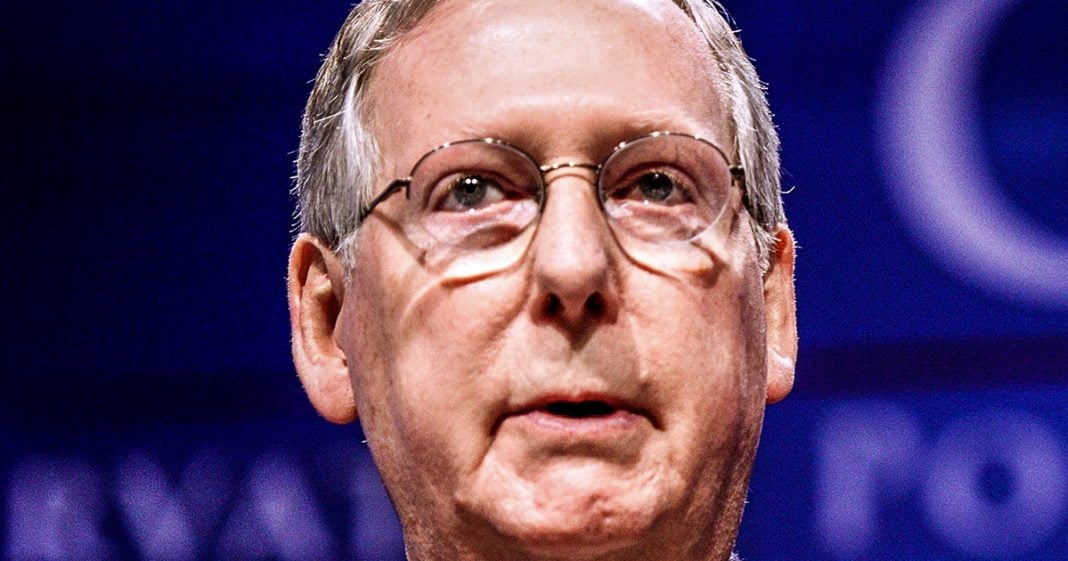 Mitch McConnell has released his first campaign video for his 2020 reelection and it certainly is a piece of work. Ironically, or perhaps not ironically, McConnell brags in the video about doing all the same things that he’s now accusing Democrats of doing, but its supposed to be ok because his obstruction was against Democrats. This man is a walking pile of garbage that should have been removed from the Senate decades ago. Ring of Fire’s Farron Cousins discusses this.

So this week Mitch McConnell released his first campaign reelection video, hoping to be reelected to, I believe this would be his seventh term in the U S Senate. And in the video he released, which I am not going to subject you to, but you can find it in the link. In the description of this video, he boasted to Kentucky citizens about his worst traits. Now I know it seems kind of odd running on your worst traits as a reelection tactic, but McConnell thinks it’s going to pay off. But McConnell either ironically, are on ironically or just because he’s dumb as dirt is actually bragging in the video about the same thing he complained about Democrats doing just a few weeks ago in a politico op-ed. Cause if we think back a few weeks ago, Mitch McConnell pinned his little op bed and he said, oh, these darn democrats in their obstructionist ways, they’re ruining decency. They’re preventing Donald Trump from doing his job.

And it’s awful and they’re horrible and they’re bad for democracy. And then in the video, Mitch McConnell sitting there bragging about holding up that Supreme Court seat and not letting Merrick Garland come to a full Senate vote to be confirmed for the Supreme Court. He’s literally bragging about obstructing President Obama for a year. That’s what Mitch McConnell thinks is going to win him his seat back. Something everybody needs to know about Mitch McConnell, as I previously mentioned, this would be his seventh term in the Senate and those are six year terms. The man has been there since 1985 he is on his 34th year right now and he’s 77 years old, so if he wins another term the next time he would be up for reelection or possibly retirement, not running again. Guy would be 84 almost 85 years old and 85 year old man who is now been removed from his district for already 34 years, not just district to states.

Use me as a senator. How in the hell can anybody in this country look at something like that? Look at the damage Mitch McConnell has done, which is what he’s bragging about. In that video, not just the supreme court, but stacking the other courts in this country. How can anybody look at this man and say that we don’t need term limits on the Senate. We don’t need term limits on the house. He’s already been there for 34 years and he’s got another year and a half until the election, or at least until the new Senate is seated. His time is up over with, done for, and it should have been decades ago. Mitch McConnell should be the poster child for term limits here in the United States because as powerful as the president may be a promise, you looking back at Mitch McConnell’s history is the leader of the Senate on the Republican side. He has wielded far more power and done far more damage than Donald Trump could ever dream of.