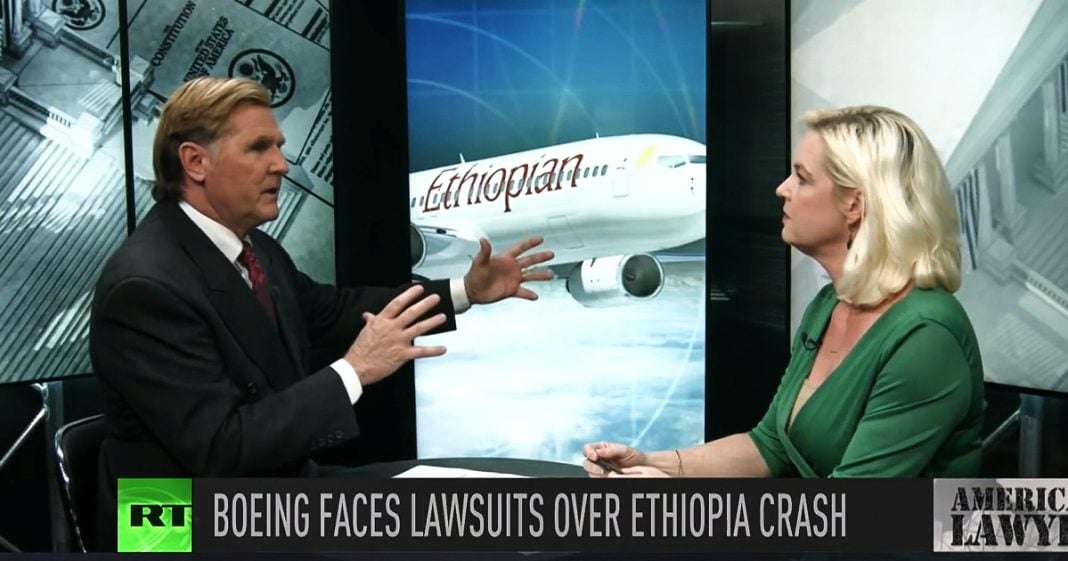 Mike Papantonio:             Ethiopian investigators say the preliminary report in the last month’s deadly Ethiopian Airlines plane crash shows the two pilots tried everything they could do to stop the airplane from nose-diving. Lawsuits against Boeing are already being filed over the crash. Mollye Barrows, legal journalist with the Trial Lawyer Magazine, joins me now to talk more about that. I’ll tell you, you probably had the same impression I did. After Ethiopia, 30 countries grounded this airplane.

Mike Papantonio:             And as I look at it, I mean, it’s the same old story. Boeing has a huge footprint in politics and so we kept the airplanes flying, running the risk again and again for all those people that were flying on the airlines. What caused the crash as far as what they found?

Mollye Barrows:                Well, of course it’s going to take a year as far as the Ethiopian investigation for them to pinpoint an exact cause or go on the record with it, but right now the preliminary findings, which just came out recently, the investigators are essentially suspecting that these pilots couldn’t get this anti-stall software to control it. It basically was overriding them. It was sending the plane into a nosedive very similar to a crash that happened in October in Indonesia; same plane, same Boeing 737 Max with this updated software that essentially they can’t override it.

Mike Papantonio:             When they started coming out and they call them glass cockpits. In modern jets it’s called the glass cockpit, and what it means is you’re getting away from traditional digital. What you’re moving into is something that’s so sophisticated. If you talk to a lot of pilots about this, they’ll tell you it’s getting too smart.

Mike Papantonio:             Yeah, they put in some new system and when you look at the decision, you go, great. You know, the airplane will land itself if it has to, but right now, in this situation, the criticism is technology is exceeding the training and capability of some of the pilots.

Mike Papantonio:             And that’s exactly what this story’s about, but as you watch this develop, I mean you’re going to see Boeing push back in a big, big way. They’re going to push back politically. I mean here again, 30 countries grounded the airplane, but not the FAA.

Mollye Barrows:                Yeah, so it was basically right after that Ethiopian crash last month that within days, 30 countries from India to Africa were saying no more of this jet and not until we get a handle on what’s going on with this software, and the FAA was saying, we’re fact-based. We’re data driven. We need to get all our ducks in a row before we do this because of course Boeing is an American company and they’re, like you said, politically entwined so that could perhaps be their motivation, but their on the record was that they wanted to get all the data first.

And of course the data that they did go and find suggested the same thing that these other investigators have found, which is why the other countries suspended and grounded the jet, which was that they still didn’t have a handle on this software and they felt it was to blame for these planes nose-diving because the pilots basically tried to override it and couldn’t.

Mike Papantonio:             Right. I’m intrigued by this governmental response. We see the same thing with the FDA all the time. The FDA, there’ll be a drug that’s killing people and it’ll be on the market in Europe and the European agencies will say get it off the market. So sometimes they’ll get the product off the market a full year before the United States even takes action, and when you look at why that happens, it is part of that lobbyist intrigue. It is who do you know? Who can you talk to? How much money have you spread around? So even though this was a short period of time, oddly enough, it was Trump demanding that they ground this airplane.

Mollye Barrows:                Only because Canada by the Wednesday afternoon. So basically then the crash happened over the weekend, March 17th and then that following Wednesday, those 30 countries, including Canada by the end of the day had said, we’re grounding this jet, and that’s when president Trump stepped forward and said, well, we’re going to ground this jet as well, which was an unusual move because as you said, the FAA normally makes that call. And it wasn’t until after president Trump said that, that they went ahead and grounded the jet as well. But you know, they’re also saying that Boeing’s going to be under investigation by the Justice Department as well as the FBI for whatever they knew or didn’t know.

Mollye Barrows:                And Boeing says they support grounding the jet, and you know there are lawsuits; so that’s the other thing. And they’re saying the same thing that the software, wasn’t it.

Mike Papantonio:             We’re going to find a document trail in here. This is going to scare the bejesus out of people. Thank you for joining me, Mollye.