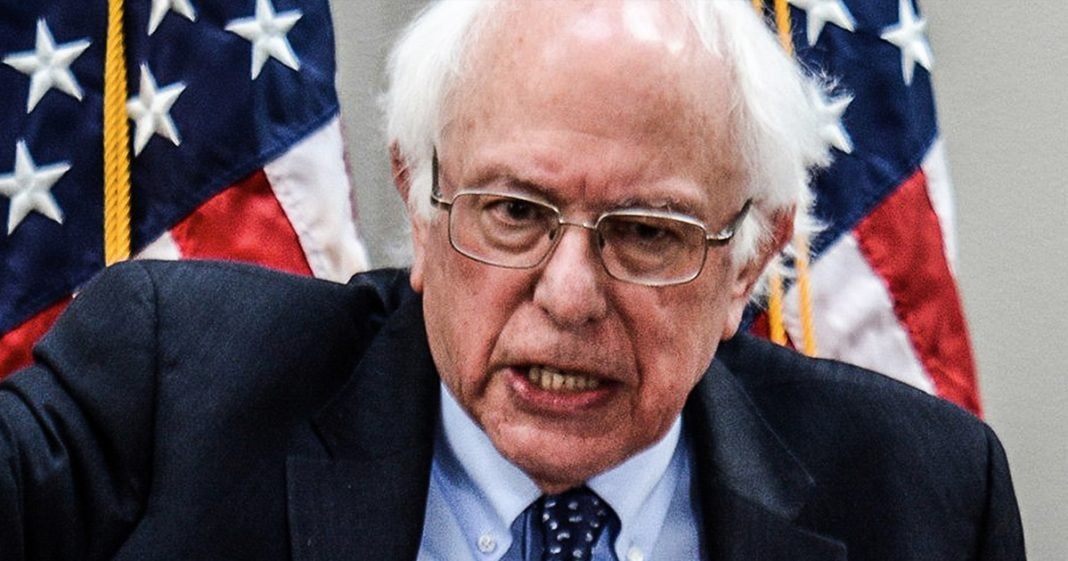 Senator Bernie Sanders has raised the bar even higher for the Democrats seeking the Presidential nomination by saying that, if elected, he would immediately ban all new fossil fuel projects in the United States and put a complete end to fracking, among many other things. This is one of the most comprehensive plans we’ve seen from any candidate with regards to addressing climate change, and it certainly puts Bernie ahead of the rest of the pack. Ring of Fire’s Farron Cousins discusses this.

Earlier this week, Senator Elizabeth Warren announced that on day one, if she was elected president, she would ban offshore oil drilling, no new offshore drilling rigs and no more drilling international parks. Bernie Sanders has now one op tour on that, which I loved. Elizabeth Warren’s playing. I thought it was phenomenal. And then Bernie Sanders has come along and now laid out something that goes even further than Elizabeth Warren. And to be honest, this is the kind of primary fighting that needs to be taking place, not the nonsense you see on Twitter, not the nonsense you’re reading from. Oh, we talked to this person’s mother and they said she’s out to get no, ignore all that crap.

Yeah, because the real fights that we should be having are the ones that are taking place. Nobody’s yelling at the other side, nobody’s calling the other side and idiot or bro or misogynistic or whatever it is with a fight that’s taking place is one about the parties soul and future and their vision and it’s a good fight. It’s a friendly fight. It’s about who can create the best policies to move this country forward. In the way that it needs to move. And that’s what’s happening between Warren and Sanders right now. There is no bad blood there. There is no anger, there is no shouting, there’s no name calling. It’s just let me see if I can push these policies even further. And that’s what Bernie Sanders is doing right now. Could be completely unrelated to Warren, but these are the kinds of things that should be happening in the primaries. This is what we need to know about the candidates, where they stand, what they want to do and how they’re going to do it. And so far those two people, Warren and Sanders have been the clearest, not just about their intentions but about how they’ll go about making it a reality. And that seems to be missing from a lot of the candidates. Tulsi Gabbard has a lot of great policies and she also helps explain how we get there. Okay.

But let’s start right now with Bernie Sanders, with his new proposal, that kind of one offs. Elizabeth the snow off shore, a drilling and no joining on public lands. Here’s what Bernie says, he’s going to pass a green, new deal to save American family’s money and generate millions of jobs by transforming our energy system away from fossil fuels to 100% energy efficiency and sustainable energy. That is wonderful. That is needed and yes, what, what he’s done here and what the green new deal did, what would AOC and everybody else pushing it has been talking about is that we’re not killing fossil fuel industry jobs. We’re not, they’re going away. Yes, but those are the people that are going to be moved. We’re going to pay for their training and they’re going to go work in the renewable energy sector. Okay.

No jobs lost. It’s just a transition. We’re moving you from a to B. You’ll make more money with be far fewer health risks working with B. So let’s get you away from a, honestly, Hillary Clinton had this proposal in 2015 while she was running for president, a $30 billion jobs retraining program to get people out of the fossil fuel industry and into the renewable industry, but then she backed off it. Okay.

That was one of one of the biggest mistakes Hillary made in her entire campaign. She unveiled this big, broad, wonderful proposal and then she backed off it a couple of weeks later after the fossil fuel fuel industry started pushing back on her. That’s not going to happen with Bernie and that’s not going to happen with Elizabeth Warren and anyway, that’s just 0.1. Let me get to the other ones here. Invest in infrastructure and programs to protect the frontline communities. Most vulnerable to extreme climate impacts like wildfires, sea level rise, drought, floods and extreme weather like hurricanes, reduce carbon pollution emissions from our transportation system by building out high speed passenger rail, electric vehicles and public transit. Banned fracking in new fossil fuel infrastructure and keep oil, gas and coal in the ground by banning fossil fuel leases on public lands and in exports of coal. Natural, yeah, gas and crude oil. So there you have it. He also wants to ban fracking and he wants to ban any new oil drilling projects in the United States, environmental groups, the AOC, you, everybody came out and they said Bernie Sanders just raised the bar even higher and yes he did. This is an absolutely phenomenal proposal and I don’t care where you stand on Bernie. If you’re one of the people who say never Bernie, I hate him, he’s in it for himself.

I advise you to look at this story, to look at these policies and to show me another candidate right now who was taking the issue of climate change as seriously as he is because you’re not going to find it. You’ll find some great talking points probably from most of them on climate change, but when it comes down to two proposals and things like that, here it is. Bernie’s the one to beat right now, not just in the polls, but in terms of his environmental policy, which to be honest, is the number one issue for 2020 medicare for all is about a hair under that. But if we don’t fix the issue of climate change, the none of the other problems mattered. And Bernie understands that, and that’s why he is said, set it in 2016 said it again with this proposal is a number one issue facing this country, and it is the first thing that we have to work on when he gets elected.