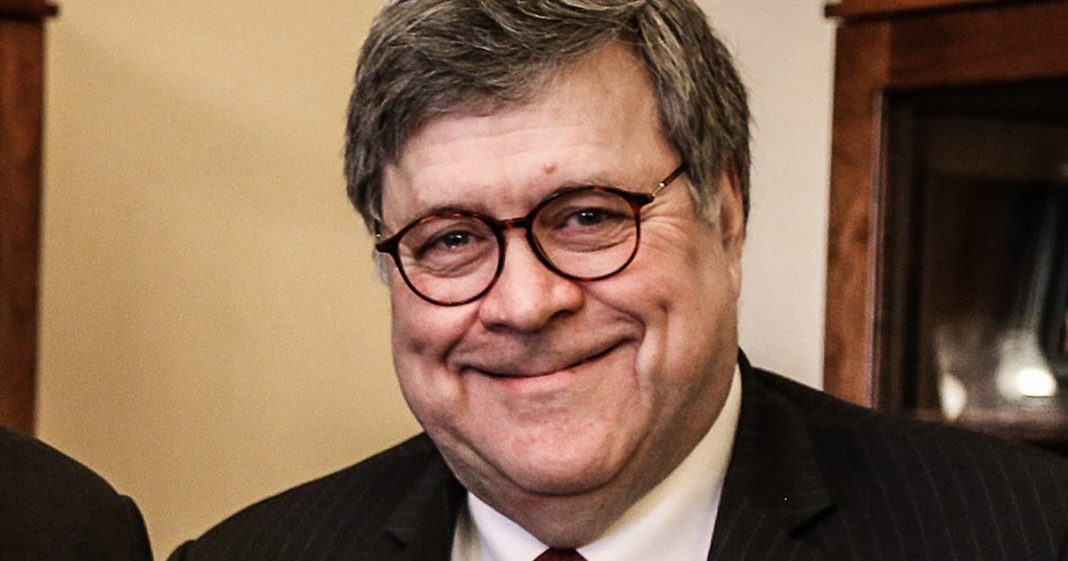 Attorney General William Barr has been briefing Trump and his lawyers about the contents of the Mueller report before he ever released it to the public. This could mean that the redactions contained in the released version were presented in an unredacted form to the President and his lawyers so that they can begin preparing a legal defense with far more information than Democrats will ever get their hands on. Ring of Fire’s Farron Cousins explains what’s happening.

So Attorney General, William Barr has already given his little press conference where he wants against summarized what he believes is probably in the Mueller report and what might actually be his legal opinion of what’s in the Mueller report, uh, which he really didn’t change anybody’s minds. He didn’t say anything that we didn’t expect him to say. So the whole thing was kind of moot. Congress now has their hands on a redacted version of the report and few hours from now I’m sure we’ll know a lot more or will know nothing more because it was too heavily redacted. But here’s the thing, this is what we know right now. First and foremost, we know that William Barr has been meeting with Donald Trump and members of his legal team and other folks at the White House for at least the last several days, briefing them on what is in the Mueller report. This is highly unusual. It’s highly suspect and basically what it means is that he was giving the White House several days, if not longer, to prepare their rebuttal and to work on their own possible legal defenses if needed before Congress had a chance to even see the report and then react to it via subpoenas, via charges against the president for obstruction of justice, whatever it is.

The White House now has the upper hand thanks to William Barr being a complete partisan hack who cares more about loyalty to Trump than he does the rule of law here in the United States, but not only that, but his press conference. Even having that press conference where he wants again delivered a summary, which he said he wasn’t even going to do that is highly unusual. They are attempting to spin it before anybody even has the opportunity to see it and again, we don’t even really have the opportunity to see it because it is going to be heavily redacted. This whole thing has been one big show really. I mean we’re not going to know the full extent of what’s in that Mueller report. This administration has now had three weeks to get ahead of the narrative, which they have done. Unfortunately for them, it hasn’t changed any poll numbers.

In fact, his approval rating has actually gone down a little bit since Barr released his summary of it, so nothing’s really changed. Nothing, and I think that’s the important thing to take away from this. The Mueller report was never going to be the silver bullet to take down the Trump administration. Collusion is very hard to prove legally speaking, and I know people are on Twitter saying, well, we know about this and we know about this. Yes we do, but you also have to have the intent. You have to have the connections there and more importantly, you have to have all of the evidence that backs up all this. That was very hard to do even for the best prosecutors in this country. Okay.

What we do know is that obstruction of justice likely took place and that William Barr jumped the gun on exonerating the president on that front. However, another mood point here because the Democrats, even if they go through the report and say, yes, we have intent on obstruction of justice. Great, what are you going to do with it? You’re going to impeach him and then kick it over to the Senate where they don’t vote to remove him from office and then we’re just back to square one and it’s over. Okay.

I hate to sound like a a fatalist and all of this, but I don’t think anything else is going to happen with this smaller report. I really don’t. Now there’s lots of other investigations that are exceptionally promising investigations that have nothing to do with Mueller and his report and anything he investigated, investigations that could lead to charges that Trump would not be able to ever pardon himself or a future president could not pardon him or his children if they did commit what people think they committed. Those are the ones we should be focusing on. That’s where we should put our hope for the future, but really we should just hope that we could beat him at the polls in 2020 by nominating the right Democrat to challenge him in the next presidential election. You want to make certain that Donald Trump gets removed from office. Don’t rely on impeachment. Start supporting progressive candidates who are pushing policies that a majority of people in this country are getting behind, including the Republicans. That is the only 100% for sure way that Donald Trump will get kicked out of the Oval Office.