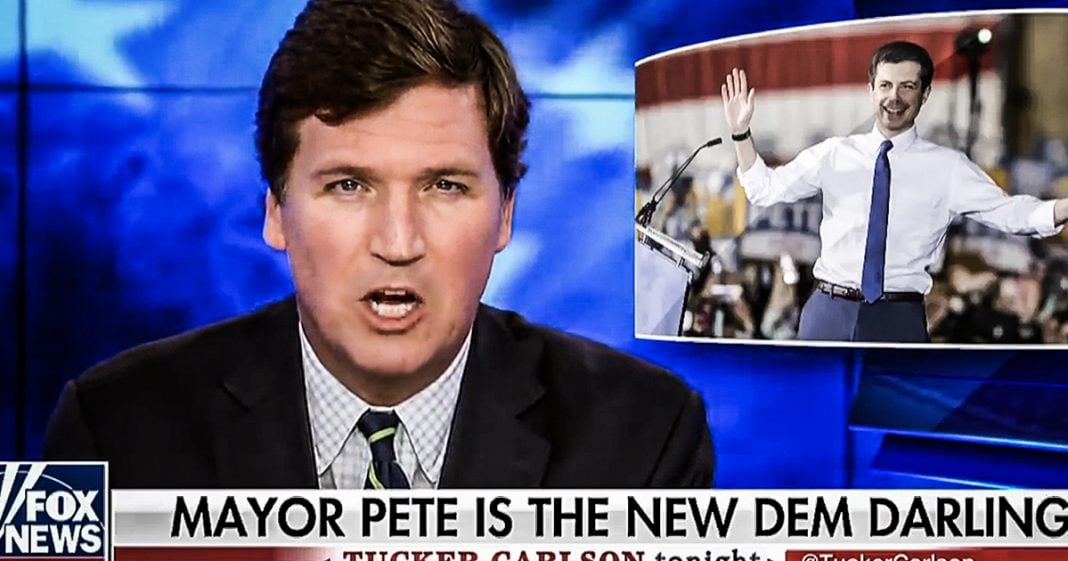 Tucker Carlson may have finally outdone himself in terms of creepiness this week when he went off on a truly bizarre rant about Mayor Pete Buttigieg and his rise in the Democratic primaries. The clip speaks for itself and really doesn’t need anymore context, but Ring of Fire’s Farron Cousins helps to dissect Carlson’s creepy statement about Pete and the not-so-thinly veiled reference to his sexuality.

Farron Cousins:                   There is something very, very wrong with Tucker Carlson and I’m just going to let his own words do the talking here.

Farron Cousins:                   Okay. All right. Now for a little bit of context, Tucker Carlson was talking about mayor Pete Buttigeig, you know, surging in the Democratic primaries, getting all the headlines, all the spotlight. Right now everybody thinks he’s pretty cool. He’s a good guy, he’s a nice guy. Uh, policy-wise me and not so great anymore. But Nonetheless, Democrats, yeah, they’re flocking to Buttigeig. But what Tucker Carlson said, there might very well be one of the creepiest things I’ve ever seen. In fact, I don’t know that it couldn’t get much creepier, but let’s go ahead and try. Shall We?

Farron Cousins:                   Now, I want to say for a moment that a Parker Malloy from a media matters had previously also done a slow down a of Tucker Carlson’s clip, uh, on Twitter. It was phenomenal. So I don’t want to take credit for that. I had seen other folks do it, but I just wanted to do it to point out how insane this man was. What does that even mean? Here’s, here’s my theory and this is obviously other people are thinking this too. This could be some kind of not so thinly veiled attack on Mayor Pete Sexuality. Um, I don’t even want to get into that. I don’t even want to acknowledge that, but I would not put it past Tucker Carlson to do that. Second of all, Fox News right now, and this is actually a good thing, is struggling to keep up with which Democrat they need to be attacking this week cause they got to move from one to the other to the other, to the other.

Because we have so many right now and it’s actually helping to divide Fox as attention. The more people we have out there, the more people gaining the spotlight, whether it’s Buttigeig, Beto O’Rourke or you know, Kamala Harris, Elizabeth Warren, Bernie Sanders, Tulsi Gabard. They can’t cover every single one of them on any given day. So they’re kind of freaking out and trying to do the weirdest things possible, which Tucker Carlson did last night. Bernie Sanders went on their network Monday night, obviously blew them away, got the biggest town hall audience that this, uh, year has seen so far. So they’re confused about how to address him because he played very well with their audience. But Buttigeig, they think they have a slam dunk attack against him. Unfortunately, it also happens to be one of the creepiest and most disgusting things we’ve ever seen come out of that network. I don’t know exactly what Tucker Carlson was thinking in that monologue, but I am hoping that there wasn’t some producer behind the scenes creepy enough to actually put those words into Tucker Carlson’s teleprompter, because if it was, then obviously the rot at Fox News does not stop with the on air hosts and it trickles down all the way through the production staff.