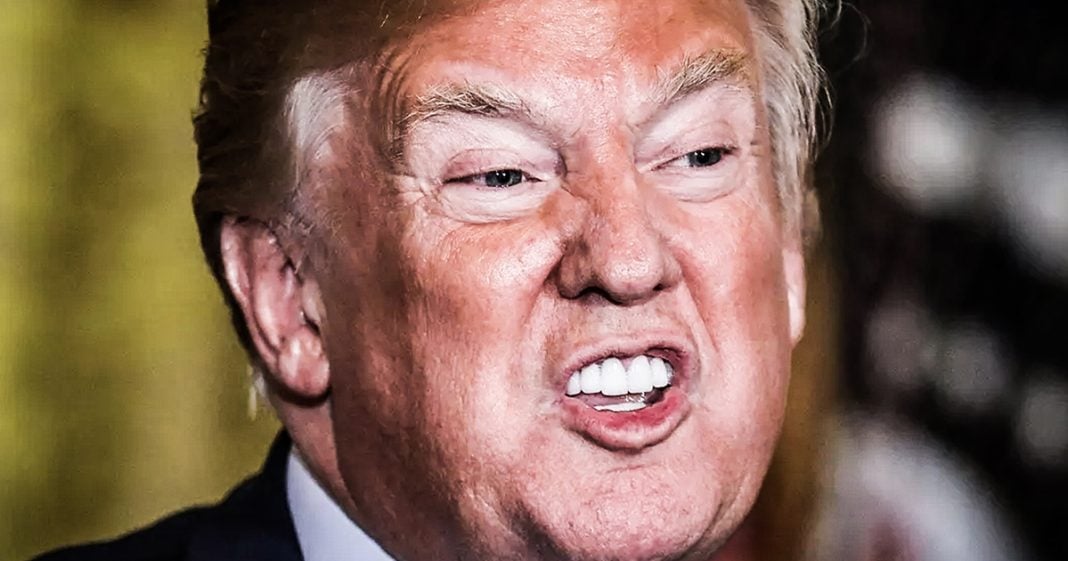 Donald Trump famously declared himself a “Tariff Man” not long ago, and he’s doing his best to live up to that title. This week, the President announced that he is preparing $11 billion in new tariffs on goods from European countries, probably because his other tariffs on China have worked so well (sarcasm.) The man is wrecking the economy and he doesn’t care a bit because it doesn’t effect his finances, as Ring of Fire’s Farron Cousins explains.

Not that long ago, Donald Trump declared himself the worst superhero of our all time a tariff man. He said on Twitter, I am a tariff man, and he’s living up to his name, and that’s not good for people here in the United States. It was announced this week by Trump himself on Twitter, of course, that he was going to be imposing $11 billion in tariffs on goods coming into the United States from the European Union. Now, the reason he did this according to him is because the World Trade Organization came out recently and said that some of the subsidies that a European countries are giving to, uh, Airbus are unfair.

You know, you’re given too much money in subsidies to this one aviation company. That’s not fair. It hurts US companies who would like to come over here and sell planes. You got to stop it. So they actually did come out and they did stop it. But Trump, I guess just now found out that this was happening. And he said, Oh, hell Nah, I’m putting $11 billion in tariffs on your goods. Let’s see how you like it. Giving subsidies to one aircraft company instead of to ours. But here’s the thing. Um, he’s not just putting tariffs on aviation products coming from the European Union to the United States. He took a little further. You’ve got things like cheese, bicycles, kitchen knives, paint brushes. Basically anything that Donald Trump who has the sole authority to do these tariffs, anything that he thinks is like stereotypical European cheese, bicycles, kitchen knives, paint brushes.

If it’s stereotypical European, Donald Trump just put a tariff on it. I’m surprised he did not add powdered wigs and pantaloons to that list, but it’s still young. Maybe he’s going to add those later. But here’s the thing. Europe’s not the one paying this, and we’ve talked about this before and economists have been talking about this and everybody’s trying to explain it to Trump. Europe doesn’t pay it. China doesn’t pay the tariff that you’ve put on them. We pay it the, the country, the citizens here that people who buy this stuff, all it does is increase the price for us. We’re the ones getting screwed on this deal. But what’s really shocking is that his trade war with China has been a complete and total failure. It has screwed over the U s economy. It has cause businesses to already closed their doors. We now have a eight year high in bankruptcies for American farmers because of the trade wars.

And this Moron looks out there, sees all the damage he calls and he says, you know what, tariff man needs to put some tariffs on Europe too, because why the hell not? And in his mind it is a why. Hell not kind of decision because his goods and services aren’t affected. Just like they weren’t affected by any of the Chinese goods because he made sure that it didn’t affect clothing or any kind of textile products like that. Because if he did that would directly affect his bottom line. He would lose money on it. So he essentially exempted himself. He exempted his daughter, Ivanka from all the tariffs and this new list of things he’s putting tariffs on from Europe. He doesn’t make those with his companies. He’s not relying upon any of those things. So he’s fine. Trump will always be just fine. It’s just everyone else in the country that suffers from is horrible decisions and that’s not an accident. That’s how he’s designed it.