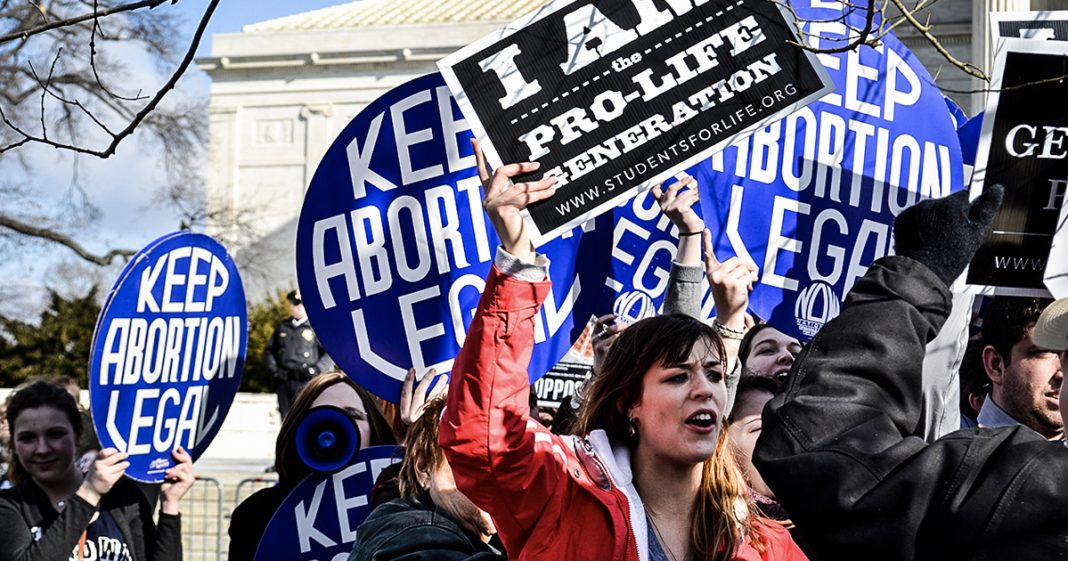 Richard Collins, a Republican state representative in Delaware, has co-signed an anti-abortion bill in his state and he’s giving the most laughable reason ever. According to Collins, he wants to ban abortions because women need to be having more babies to help “repopulate” the country. He’s worried that our population is declining too quickly, not that he’s stripping women of the right to make decisions about their own bodies. Ring of Fire’s Farron Cousins discusses this.

Republican. Richard Collins, a state representative in Delaware has sponsored a new anti abortion bill, but he wants to assure us that it’s not based on some crazy religious belief or his hatred of women known in it. No, he wants to stop abortions in the state of Delaware because women need to get busy repopulating the earth. He says, birth rates are down in this country. We’ve got to get going. We’ve got to start having more babies. Ladies, I’m looking out for you. I’m looking forward to the future and that’s why we need as many babies as we can get. Now, aside from that being a super creepy thing for this sitting representative to be out there telling us, um, it’s also completely false. This guy knows exactly what he’s doing. He’s just trying to put a unique spin on it. In fact, here is what he told a radio show earlier this week.

He said, God is moving and strange and wonderful ways, folks, gun bills that we’ve talked about. We’ll save essentially no lives because it will have no impact on criminals getting or keeping their guns. But every single year we kill hundreds of people and abortions, you know, we have a massive problem in this country. Our birth rate is way, way below replacement levels. You know, we’re just not having enough babies. So that’s it ladies. He doesn’t want to take away your right to choose. He just wants you to become little baby factories so that we can repopulate. The United States that we were actually just told a week ago is full. Remember that? Remember a week ago, Donald Trump telling us that this country is full. We can’t take any immigrants because it’s full. Apparently Representative Collins here didn’t get the message because he’s telling women in Delaware to, you know, start churning out these babies as fast as you can and I’m going to make abortion illegal because I care so much about just having as many people as possible.

But don’t get your hopes up folks, because Collins like most Republicans will do absolutely nothing to help those children once they’re born. He just wants to make sure that, uh, women have the child after that they’re on their own. You know, sorry if you can’t afford food for the baby, if you can’t afford diapers, if you can’t afford food from yourself, if you have to take six weeks off work and you’re not going to get paid for it, oh well that’s your fault, ladies. That’s the same kind of Republican logic we see time and time again. Oh, also, we’re not going to cover your medical care while you’re pregnant cause we defunded planned parenthood because we lied about what it is they actually do. You see where I’m going with this? Republicans want to do everything possible to tell women they can’t make a choice about their bodies. But when those same women end up in financial dire straits because of the decision Republicans made for them, Republicans say, well, too bad you’re on your own. Maybe you should have thought twice before you tried to repopulate the planet. That’s not how it works. And I hope women remember this. Remember these idiots like representative Collins up in Delaware who will spin it any way they have to, to not have to say that they don’t trust women to make choices about their own bodies.