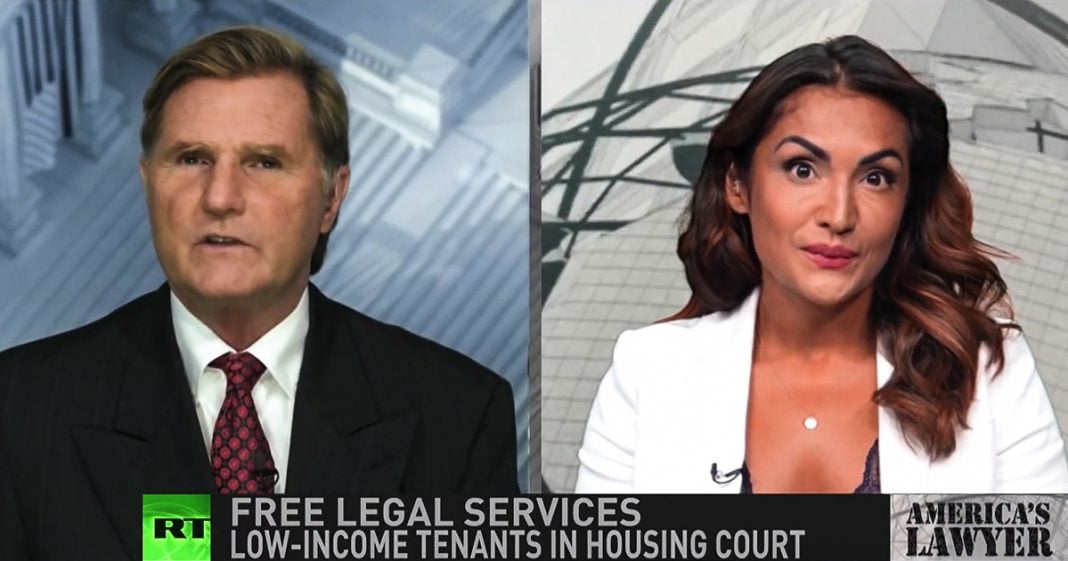 Mike Papantonio:             Hundreds of thousands of low income tenants are evicted every year from their homes across the US; many without the help of an attorney and a court hearing. Some cities and states are hoping to change this and are looking at a new program in New York City as a model. RT producer, Sayeh Tavangar, joins me now to talk about this story. Sayeh, why did New York start this program?

Sayeh Tavangar:                Well, Mike, New York City is one of the costliest places to live in a country where salaries have not kept up to date with soaring rents there for more than 80,000 eviction proceedings were filed last year. Historically, only one in 10 tenants have been represented by attorney while most landlords have lawyers. Therefore, evictions have been a major driver of housing instability and homelessness for low income New Yorkers.

Now in the past, tenants facing evictions usually arrive to Housing Court without legal representation at a major disadvantage to landlords who almost always have an attorney, but now this is changing. After years of advocacy, New York became the first city in the country to launch what they call “right to counsel.” This law will give tenants with incomes below 200% of the federal poverty level who are facing an eviction and housing court access to free attorney.

Mike Papantonio:             Even with the best attorney, the housing courts are going to be faced with the ultimate question of does the tenant have the money to pay the rent or not? I mean, at the end of the day, that’s really the question. They can be well represented, but the question’s always going to come down to that basic dispute.

Sayeh Tavangar:                Well Mike, not all tenant disputes are about money, actually. Consider the case of Nadia Mater who lived in a rundown apartment building in the Bronx that had been plagued with leaks, rats, and roaches. Nadia didn’t even have heating or cooking gas September of last year, and even had to cook on a hot plate since her heat only came on sporadically. Now as a result of this new program, tenants in her building organized a legal suit against the landlord to fight for their rights, and as a result, won. Now if their landlord retaliates, they now all have access to free legal help.

Mike Papantonio:             Well you know you get what you pay for, and I’m wondering how much money is being put into this program. You could say, yeah, we’re going to have attorneys, we’re going to have a program, but the real question comes down to, is it a series program? Is there real money being put into it? Is it something that’s sustainable, or is it here today and gone tomorrow? What’s your take on it?

Sayeh Tavangar:                Well, the program is currently being phased in over five years and New York City’s 2018 budget included $155 million for the first phase of the program, which is reaching 20 of New York City zip codes, but lawmakers say this cost is actually well worth the price, which has already drastically reduce homelessness in the city. As a result of this program, new city has seen a dramatic drop in evictions. 84% of households who have been evicted earlier this year that were represented by lawyers now are able to remain in their homes.

And now all of the right to counsel program was originally launched in 2017, it’s now finally being phased in by zip codes and city officials say 30% of tenants facing eviction or have access to lawyers. And Mike, it’s also worth noting that this program is not just for home evictions, but also helps tenants get home repairs that they need, and also helps to make sure that the rent that’s being charged is a lawful rent, and to make sure that tenants are not being displaced from their apartments as a result of harassment.

Mike Papantonio:             Well it sounds creative and I’m wondering, are there any other states that are following this idea that really sounds like it could work if it’s properly financed?

Sayeh Tavangar:                Yes. While New York, obviously it was the first city in the US to pass the right to counsel program. Now, San Francisco and New York, New Jersey have both adapted similar legislation, and both cities are actually poised to reach an even higher share of tenants to New York City. And now lawmakers in Massachusetts, Connecticut, and Minnesota are also now considering its statewide proposal to provide free attorneys to struggling renters.

And although the program is currently only available to low income tenant households who experienced the highest rent burden and eviction, some states are also looking to provide this service to moderate income tenant households who are also experiencing housing instability and are also vulnerable to evictions. For example, in New York City, the moderate income is about $81,000 for family of three.

Now Mike, the majority of households in the moderate income category work in health care, education, social services or retail, hospitality, and food service, and only actually 88% live in unregulated housing and don’t receive any form of housing assistance such as section eight. So all in all, there seems to be consensus among legal scholars and academics that access to an attorney, reduces evictions and increases housing stability drastically.