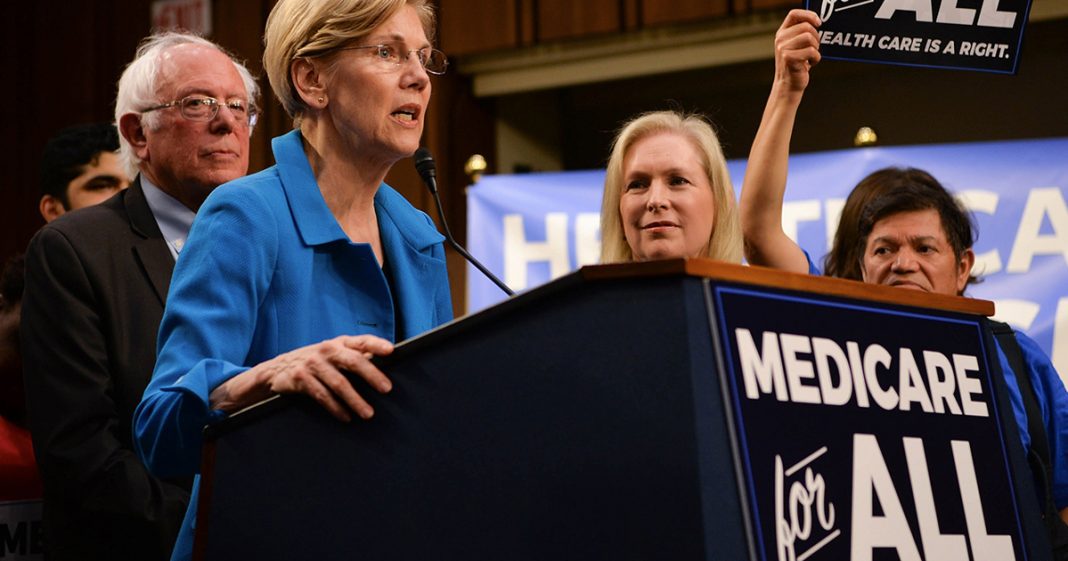 UnitedHealth Group CEO David Wichmann is warning investors that the healthcare market could come crashing down thanks to the push by certain progressive politicians for Medicare for All. And that collapse is no accident. The insurance industry, along with Big Pharma and hospital corporations, have had more than enough time to stop gouging consumers and make their products affordable, but their repeated failure has led to an angry public and an energized Congress. Ring of Fire’s Farron Cousins explains what’s happening.

Yesterday during a conference call with investors, United Health Group, CEO David Wickman told investors that the entire health insurance market, healthcare as we know it in the United States is in danger of completely collapsing because of those no good scoundrels, Bernie Sanders and Alexandria Ocasio-Cortez, specifically the Medicare for All proposals, that those two and several others in Congress are currently pushing the same plants that several presidential candidates are also pushing the same plan that the rest of the Democratic presidential candidates should be pushing. Because you know what, it’s about time for the health insurance industry in the United States to collapse. They have had it too good for too long by screwing over too many people and this is what they deserve. Here is a specifically what Wickman said on that phone call. He said, uh, this would surely jeopardize the relationship people have with their doctors. Doctors destabilize the nation’s health system and limit the ability of clinicians to practice medicine at their best if we were to enact any form of Medicare for All here in the United States.

Um, none of that is true. None of that is true. How would Medicare for All change your relationship with your doctor? That doesn’t even make any sense. In fact, it would probably improve your relationship with your doctor because you’re not going to be good harassing letters and phone calls for the next six months after you go in because they had a sinus infection and you didn’t pay your bill or your insurance came back and they’re not going to cover it because it wasn’t a well visit and so on and so forth. Doctors’ offices mad at you because you haven’t paid your bill yet. They won’t give you a new appointment till you pay that bill. Millions of Americans understand exactly what I’m talking about and I’m speaking from experience with that. So I don’t think enacting Medicare for All is going to piss doctors off and make them dislike their patients at that point.

They don’t have to worry about those bills getting paid because they’re gonna be paid not. So with the private health insurance industry that has moved us away from copays, switched us all over to deductibles over the last 10 years, still making health care completely on affordable health insurance stocks are not rising as fast as other stocks. This year there’s still up 4.1%, uh, over the past year, so there’s still going up. They’re just not going up as fast as others. Part of the reason is because investors are worried about Medicare for All. They don’t know if they should invest in an industry that might be destroyed within the next few years and should be destroyed within the next year. If you ask me, they’re also worried that the Trump administration’s lawsuit try to kill the affordable care act could kick 32 million people off their health insurance, which is going to result in a lot of health insurance companies no longer getting paid premiums every single month. But here’s the bigger picture, and this is why I don’t care that investors are scared. I don’t care that health insurance CEOs are terrified they should be because they have had decades to fix the problems within their systems to fix the way that they do business. Same goes for pharmaceutical companies and hospital corporations that charge us these astronomical prices. Whenever we need something done, they could have fixed it a long time ago. They could’ve lowered the prices. Hell, they don’t even seem to understand that lowering prices will frequently lead to an increase in sales, so lowering your price will actually increase your revenue in many instances, especially for a high demand thing like health care,

but they don’t care about that. They only see the bottom line. They only see the short term. They only see how much money they made last week instead of how much they could make six months from now because six months from now they may have a different CEO and that person has to make as much money as they possibly can in a shorter time possible and then get the hell out of that company leaving in shambles for the next person to take over. That’s the CEO mentality today. Most CEOs do not stay at a company now more than five years. Some of them don’t even stay three years before they move on like locusts to the next corporation and extract as much money as possible. And the healthcare industry is no exception to that. And that’s also part of the problem. But at the end of the day, these companies have had decades to fix all the problems that they have created to fix the hatred that the public has for them. They chose not to. And now because of their greed and their corruption, the government will have to step in and act and Medicare for All plan. And yes, it might mean the end of private insurance as we know it, but considering the fact that they’ve refused to change and do better, I don’t think that’s such a bad thing.