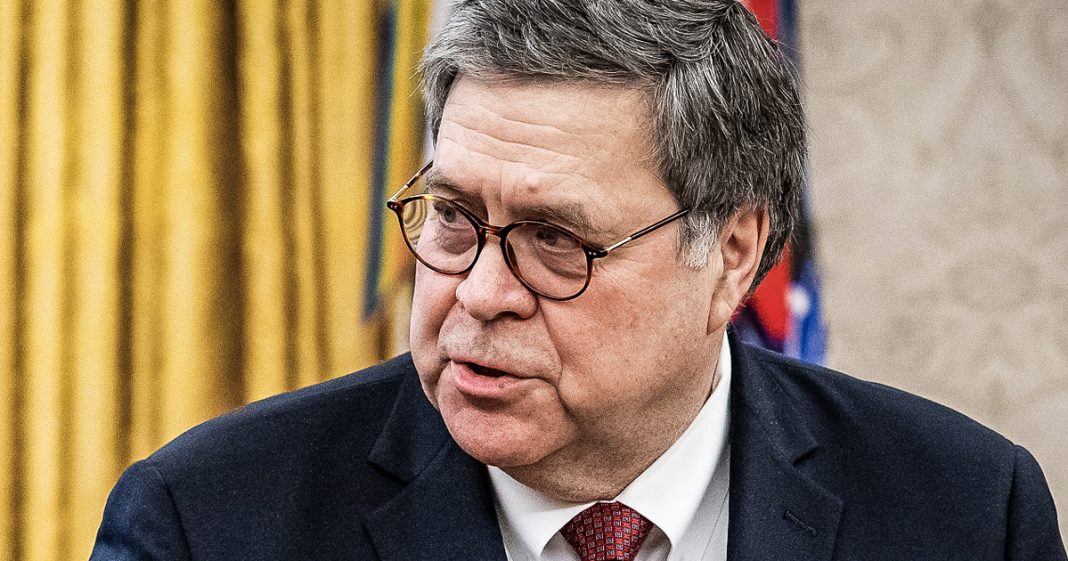 Attorney General William Barr knew exactly what he was doing when he released the summary of the Mueller Report because it is identical to what he did regarding a 1989 report from the Justice Department. Barr is the man now in charge of “redacting” the Mueller Report, and based on his history of omitting important facts and presenting his watered-down and untrue version of events to the public, it seems unlikely that we’ll ever really know what Mueller found. Ring of Fire’s Farron Cousins discusses this.

So the prevailing news right now is that we will get a heavily redacted version of the Mueller report released this coming Thursday. So who’s doing the redacting? You might ask, well, that his Attorney General William Barr, the man who has repeatedly shown throughout his career that he can not be trusted within the last few days, stories had been circulating about bars actions in 1989 when he, as then the head of the office of Legal Counsel at the US Department of Justice, a god his hands on a DOJ report and he was in charge of delivering that report to Congress. But instead of delivering the report to Congress, William Barr decided to write a 13 page summary of this report, which he then delivered that to Congress and it was later revealed that bar lied bar, lied through his teeth. But was he punished? No.

In 1991 just two short years later, he was appointed attorney general by George H. W. Bush. So here’s the thing, this is what happened back in 1989, uh, this DOJ report was dealing with whether or not the FBI had the authority to go to another country without the consent of that government and make arrests of people wanted for crimes back here in the United States. That’s illegal. We cannot just go into another country uninvited without permission of that country, without permission of the UN and arrest somebody and bring them back to the United States. It’s a violation of international law, but that is what the United States was doing during the Reagan administration. And that’s what this DOJ memo showed. But William Barr and his address to Congress is 13 page summary Said, oh, no, no, no, no, no. We weren’t even dealing with international law. We were just talking about domestic law, uh, in this report and what the FBI is allowed to do. So yeah, under domestic law, we’re totally allowed to arrest people, but that’s not what the report was about. And that is certainly not what the report said.

The report was dealing with international law. Now, that all may seem confusing and I did my best to kind of boil it down to nuts and bolts right there, but the bottom line is this. William Barr has a history of lying, not just to Congress but to the American public to cover up for a corrupt president and we’re somehow supposed to trust this guy to redact the Mueller report, which some experts are saying could be up to 50% redacted. This isn’t a report at that point, it is a page that looks like it was covered with ink that spilled out. We’re not going to learn anything from this report because that’s how William Barr wants it to be.

Yeah, he says he’s briefed the White House on it and judging from Trump’s erratic and incoherent tweets for the last 48 hours, I think that’s a safe assumption that he did brief the White House about it because Trump appears to be freaking out for no apparent reason right now, but we’re not going to know until Congress is able to get their hands on that full unredacted report. Now, having said that, I think if we’re making assumptions, because unfortunately that’s all we can do right now. What we could find from an unredacted report would be that this administration acted very carelessly, acted foolishly. Much like Comey said, uh, when he came out and said, I’m not charging Hillary, but she really screwed things up and you know, she should have had better judgment. I think we’re getting, we would see a lot of that. Uh, we would likely see the real evidence of obstruction of justice, that Congress should be the ones making the determination on whether or not to proceed with charges on that.

Not William Barr. Maybe we would see intent for obstruction of justice there. Maybe not. But the point is until that full unredacted report is released, all we have a speculation, we’re not going to know what’s in those redacted sections. And that is a problem. The public waited almost two years for this report and Republicans and Democrats alike want to see the full unredacted report. But rest assured, as long as William Barr is our attorney general, we will never get to see what’s in that report. And that is really the only reason why William Barr is attorney general today.