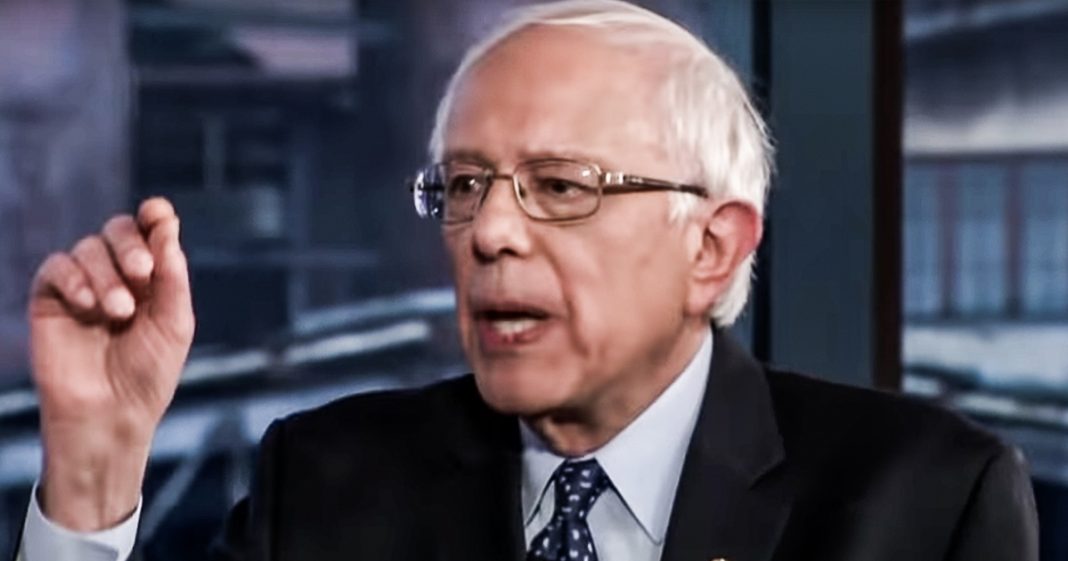 Senator Bernie Sanders proved on Monday evening that he is definitely the one to beat in the Democratic primary after performing well above expectations at a Fox News townhall. Not only did Bernie come across as sincere and intelligent, but he also got the audience to understand that we are all fighting for a better future – a future that includes Medicare For All, which the audience cheered for. Ring of Fire’s Farron Cousins discusses this.

When Senator Bernie Sanders announced that he was going to be doing a town hall on Fox News. You had a lot of people on the left pretty angry about it. They couldn’t understand why a not a Democrat, I guess because that’s what they like to say about him. Why somebody like that would go on Fox News and you’re just legitimizing the network and there are so horrible and yes they are. And last night during Bernie Sanders town hall, he made a point to tell them how horrible they are. That takes a lot of courage to go on stage with host from a network and let them know that you do not respect their network because they lie to their viewers and act as a propaganda arm for the Trump administration. I don’t think there’s a lot of Democrats out there who would have the courage to go on stage in their faces with the Fox News hosts and tell them that, but Bernie did.

And more importantly than just pointing out the fact that the network is a giant pile of trash up. Bernie got people onto his side burning, answered questions. Bernie talked policy. Bernie did what every single democratic candidate should be doing. He talked to people, he talked to them in simple terms and they understood it and they embraced it and they liked it. When Bret Bair, one of the moderators of this town hall, Fox News host asked the audience how many would support Medicare for all rousing applause through that audience. Bret Baier was not expecting that the Fox News people were not expecting their viewers, their audience, and yes, there were plenty of Democrats in there too, but they still weren’t expecting them to start cheering for Medicare for all later on in the debate or town hall shoes. Me, Bernie goes on to talk about things like infrastructure to which everybody agreed living wage to which everybody agreed.

They already agreed with him on the Medicare for all issue. They want the policies that he is talking about and still even after this town hall when it was generally agreed, including by papers that routinely attack Bernie, that he crushed it. You still have those holdouts on social media. The Never Bernie folk saying, oh, he shouldn’t have done this. Oh, Fox News ran a horrible segment in the show after cause. And that’s just birdies being stupid now because he didn’t know what they were going to run after Bernie was talking to voters. He explained to them that Trump has lied to them and that they deserve better and that at the end of the day we’re all on the same team and that is team America. Okay.

And the way we get to have a better team is through these policies that he is pushing the hatred that Bernie Sanders receives online. I still don’t understand. And I also don’t understand how these never Bernie folks go out there and talk about how horrible the Pro Bernie folks are without ever once looking in the mirror. What I’ve started con uh, doing actually I’m compiling screenshots of some of the most horrible things that I see these, uh, liberals post about Bernie online. Cause I’ve seen plenty of them do it for Bernie folks. Yeah. Every single person has horrid followers. That doesn’t make them a majority. That doesn’t mean that their voices are even being heard or paying attention to. But I’m keeping these screenshots because eventually I do want to show these people who say that Bernie’s folks are just the worst that the folks on their side or bad as well, but I guess that’s just an aside.

What happened last night was that Bernie Sanders spoke to voters who otherwise would not listen to him and he did a damn good job. I do think more candidates should do this. I don’t think most of them would be as successful as Bernie Sanders was. There are several of them who would do extraordinarily well, including Elizabeth Warren, I think would kill it on that stage. Some of the other folks, I don’t think they could, but it’s because these people, these middle of the road and even the Trump supporters who are now kind of wavering, they want to hear policy. They don’t want to be told that they’re stupid for voting for Donald Trump. They don’t want to hear how dumb Donald Trump is. They don’t want to hear how corrupt he is and they don’t want to hear the word Russia ever again. What they want to hear is how these candidates are going to make their lives better. And that is exactly what Bernie Sanders delivered to them on Monday night, shortly after finally delivering 10 years of his tax returns. So he went ahead and silenced a bunch of his critics by doing that. Bernie Sanders won Monday and he showed us all why he is the person to beat in this Democratic primary.