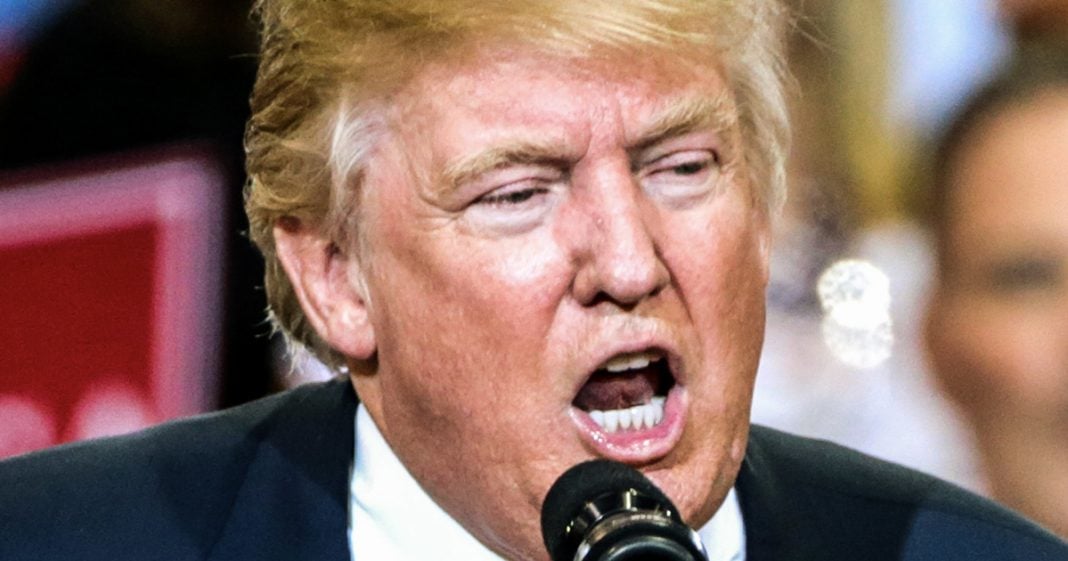 Last week, Attorney General William Barr stated during Congressional testimony that he “believes” the Trump campaign had been spied on. That simple sentence was all the administration to reawaken their conspiracy theory that the former Obama administration had Trump’s wires tapped to derail his campaign. Trump is now using this unsubstantiated claim by Barr as a fundraising tool. Ring of Fire’s Farron Cousins discusses this.

So last week, Attorney General, William Barr had to appear in front of an appropriations committee to give a little bit of testimony about funding and spending and all that stuff, standard procedure in DC. But he also brought up something that the Trump administration then jumped on and are now using it in their fundraising emails. And that’s something was when William Barr said, I believe spying did occur. I think spying did occur on the Trump campaign. Now, not necessarily anything that even needed to be brought up during an appropriations hearing, but nonetheless, William Barr brought it up because he is a good loyal little toady to Donald Trump. But here’s the thing, you know, even though yes, he was asked about it, it’s still not something that should have been brought up during an appropriations committee, but William Barr knew exactly what he was doing and he knew exactly what Donald Trump is going to do with this information. Okay.

And Donald Trump and his campaign on Friday, a couple days after bars testimony, send out an email campaign fundraising email, Shang Attorney General William Barr confirms with Trump’s been saying all along. And that is that illegal spine took place on the Trump campaign. Well, first and foremost, that is not what William Barr said. William Barr said, I think spying occurred and then specifically went out of his way to say that, I don’t know that it was illegal. I think it was probably predicated on something, you know, fully. Okay, but I’m investigating it. So that’s the thing I’m doing because I think spying happened.

We know that spying happened. We, we understand that because there were members of his campaign who had very shady pasts and at the time, very shady presence. And the FBI thought, you know what? We probably need to keep an eye on these people. And Hey, turns out we were right because most of them ended up being indicted. So I would call that fully justified spying. But nonetheless, the Trump administration and the Trump campaign are now using this to push their old failed and tired conspiracy theory that Obama had his wires tapped, which also was something that didn’t actually happen. Here’s the thing, Trump pedals in conspiracy theories. Trump’s base eats up those conspiracy theories and they go out there and they start telling their friends and so on and so forth and it spreads like a wildfire. They took what William Barr said, not only did they take it out of context, but they then lied about what he actually said in order to try to justify their conspiracy theory. We know that the spying took place and we know why the spying took place and we know the end result of those wire be as people did get indicted fully justified at that point because they were able to prove to the grand jury that these folks committed some crimes, but all of that middle part will be left out of these stories just like it was left out of the Trump campaign fundraiser email.

And instead they focused on the one thing that they claim Barr said, which he didn’t actually say, and that is that illegal spying took place. Even though we know that it was an illegal bar, is going to continue throwing out these little nuggets of untruths because he sees how Donald Trump can use them to his advantage by spinning them and pushing them out to millions of people who will never bother to look at what was actually said and more importantly what actually happened in this country. The story of the spying or wire tapping of Trump campaign is well known. We know where it started. We know why it started. We know how it went down and we know the end result. That’s case closed on that, but to the folks who were those bright red MAGA hats, all of that middle part, the justification, the end of it, the people that got indicted, that doesn’t even exist. All they know is what Donald Trump tells them and that is that Obama had his wires tapped. So you can bet that this is going to be a thing now that we’re going to have to deal with probably for the rest of Donald Trump’s life.