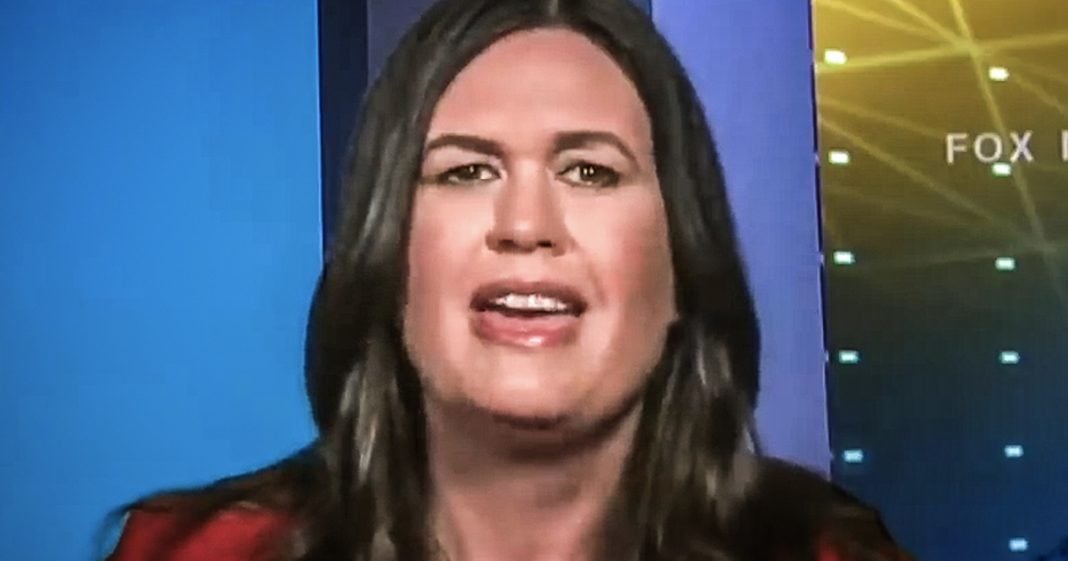 According to Sarah Huckabee Sanders, Democrats in Congress aren’t “smart enough” to read Trump’s taxes and be able to understand what is in them. Not only is this incredibly untrue, but she also fails to see the irony of her calling anyone else unintelligent. This administration is filled with the dumbest people imaginable yet they parade around like they are the smartest. Ring of Fire’s Farron Cousins discusses this.

On Saturday, chairman of the House Ways and Means Committee a Richard Neal formally submitted his second request to the IRS for Donald Trump’s tax returns. Now Neil as the chairman of this committee, absolutely has the legal right and authority to request these tax returns and they pretty much have to comply. You don’t really have a choice here. You have to hand them over. So on Sunday after news broke of the second formal request, a Fox News host, Chris Wallace decided it would be a good idea to bring on Sarah Huckabee Sanders and ask her about this whole Donald Trump tax return fiasco happening. And Sarah Huckabee Sanders certainly didn’t disappoint the Fox News audience. Here’s what she had to say.

This is a dangerous, dangerous road. And frankly, Chris, I don’t think Congress, particularly not this group of Congressmen and women are smart enough to look through the thousands of pages that I would assume that president Trump’s taxes will be. My guess is most of them don’t do their own taxes. And I certainly don’t trust them to look through the decades of success that the president has and determine anything he’s filled out. Hundreds of pages in a financial disclosure form you get is a disgusting or overreach that they are making when they’re not doing this based on policy. And it puts every American who’s filled out tax reform or tax forms in the past on everybody.

That’s right. Everybody, Democrats, especially the Democrats in DC right now, as Sarah Huckabee Sanders told us, we’re just too damn stupid to know how to read Donald Trump’s tax returns. We don’t know what any of it means. We don’t know what numbers are. We don’t know what businesses are. We’re just dumb old Democrats who took back the House of Representatives in 2018 because America was sick and tired of Republicans doing absolutely nothing except sucking up to President Donald Trump. No, Sarah, I think you miss the irony here. Uh, have you, first of all, calling anybody else not smart enough to do something when, uh, just a few seconds later you actually said tax reform instead of tax forms. So it’s always a little iffy when you’re trying to insult somebody is intelligence and then you screw up the word like right after that. So make a note to try not to do that in the future, but also the fact that you have just become an extension of this ugly and disgusting and horrendous administration to the point where you can’t come up with a decent argument as to why this is an unnecessary fight. And Democrats do not need his tax returns. No. Instead, you immediately go to the personal, they’re not smart enough. They’re too stupid to know what’s in there.

You could have come up with something, right? Well probably not because you have nothing better. And you know damn well just as most of the people in this country know that there is something hiding in those tax returns that Donald Trump does not want the American public to see. A majority of people in this country want those tax returns released. A majority thing, you’re going to, we’re going to find some kind of damning information in there. Although almost a majority, almost half of the people think that it’s not going to be anything impeachable, but we still need to see what’s in there. You know, for full transparency to make sure this guy’s not profiting off the presidency, to make sure that he doesn’t have any conflicts of interests that we don’t already know about by insulting the Democrats in DC. You’re insulting every single one of us who thinks that we need to, uh, we need to see these, and that’s a majority of people in this country, Sarah. So you’d better be careful when choosing your language, because if you’re going to accuse anyone of being not smart enough to understand something, you probably need to start with the guy who calls himself your boss.