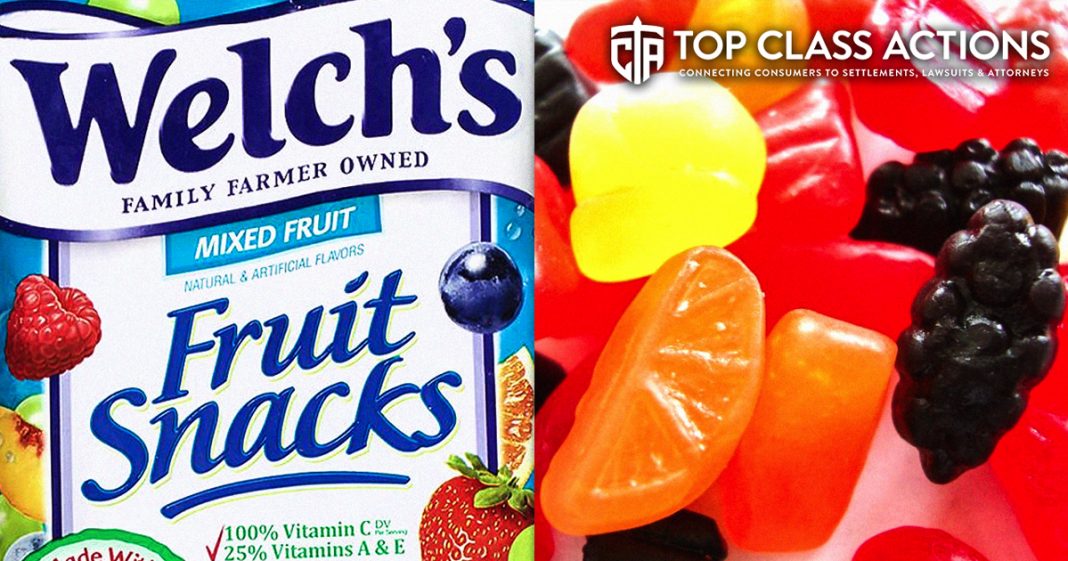 Farron Cousins:                  Consumers when out in the grocery store, when shopping really for any kind of food product, most of the knowledge that we have to make our decision to purchase or not purchase a product comes from what’s on the outside of that box. You know, and if we have a choice between something that says made with real fruit, contains lots of vitamins, contains fiber, this is a good product for you, we’re typically willing to pay a little bit more money to have the product that’s going to give us the things that we need.

And we’re also depending on the company to be honest about what kind of claims they’re making. And as we have found out all too often, usually not the case. Joining me now to talk about the latest instance of yet another company not being completely upfront with what’s in their product is Scott Hardy from Top Class Actions. So Scott, it’s a story we’ve heard time and time again, different names, different faces. This time we’ve got Welch’s real fruit snacks. Tell us what’s happening here.

This one, which we just reported on March 25th already has 769 comments is all about Welch’s fruit snacks and their claim of having fiber and saying that, you know, not only is it a good healthy snack for your kids, but there is fiber. And so this class action is stating that the average consumer sees this represented on a, on a Welch’s package and says, hey, all right, you’re giving me the fruits, you’re the, there’s good fiber in these fruits and blueberries and strawberries.

So you’re, you’re passing that goodness on along to me. Oh, but when you take a look at the actual ingredients, no, you’re not getting any fiber from the fruits themselves. You’re getting it from chicory root, mm chicory root, and that’s how they’re actually putting fiber in these snacks. So that’s what this class action is about is saying, hey guys, listen, if you’re going to go ahead and say that there’s fiber in it, tell us that it’s from oh so yummy chicory root and not from the oh horribly not delicious strawberries and blueberries and things like that.

Farron Cousins:                  People also have to understand there are different forms of fiber. The fiber that you’re going to find in a fruit is not identical to the fiber that you’re going to, going to find in a vegetable or in a root, for instance. So yes, there are subtle differences in these things and so if you’re saying this is made with real fruit and there is fiber, a consumer is logically going to think, okay, it’s got the fiber from the fruit. On top of the fact that this product says we’ve got 100% of your vitamin C, we’ve got 25% of vitamins A and E, everything you need for the day with fiber and no preservatives.

These are the perfect example of things that, you know, people give their kids. I give my kids these fruit snacks cause it’s difficult a lot of times to get kids to eat vegetables so they’re not necessarily getting the fiber. They don’t like a lot of fruits. So it’s hard for them to get fiber and vitamins and things that way. So these fruit snacks, snacks do, especially according to doctors who actually say give them these fruit snacks.

This is where we’re counting on a lot of the sources, especially fiber, which most people in this country are actually not even getting enough fiber and they would be shocked to find out where this alleged fiber they are getting is coming from and that, that’s what this lawsuit is telling us here.

Scott Hardy:                          Exactly. You know, just like you, my kids do eat these snacks and they love them and I do it, on the hopes just like you that they are getting some vitamins as is represented on the box, that they’re getting some fiber as is represented on the box. And you know, if I can just go and get the fiber from this paper, mm that shouldn’t be the case. This is not going to be the great soluble fiber that I could get from actually eating the fruits themselves or ideally that the manufacturer is packing into the fruit snacks so I can get that natural soluble fiber that will help me and not just eat paper for my vitamins.

Farron Cousins:                  Right, and, I, I’m being serious, you know, when I say doctor’s advice, because my, my kids’ pediatrician, wonderful, absolutely wonderful doctor. This is what she actually had suggested to us. To make sure the kids are getting enough fiber. She said try, try the fruit snacks that, that have fiber in them. So she was making this good faith recommendation based on what this company was saying they had. So this is a very interesting one. This is a very, you know, seemingly deceptive one.

And I don’t think this has got to go well for Welch’s and, and honestly, I don’t think it should. As we’ve said so many times here, people are making decisions based on what that box says. There aren’t exactly a ton of people out in this country who feel that it’s necessary to go and sit and do research on what kind of fruit snacks to buy. You know what I mean? You see it in the store. You say, oh, okay, well this one says this, I should trust them because we should be able to trust them. But at the end of the day, all too often we can’t.

Scott Hardy:                          Exactly and, and you know, you have to do your research and most people aren’t looking at the bag and seeing chicory root as one of the ingredients and then coming to that, understanding at that point that that’s where they’re getting the fiber from. They’re not actually getting it from the fruit. You know, that unfortunately you’ve got to look at these things and that’s a big reason people go to the organic snacks because you’re hoping for a little more straight forwardness on what’s being advertised. So of course you and I have talked about those snacks too and it’s not always the case.

Farron Cousins:                  Absolutely. If you need more information about this issue, follow the link in the description of this video. Go to topclassactions.com and while you’re there, sign up for their weekly newsletter to get all of these stories and more delivered directly to your inbox each week. Scott Hardy, Top Class Actions. I appreciate you taking the time to talk to us.