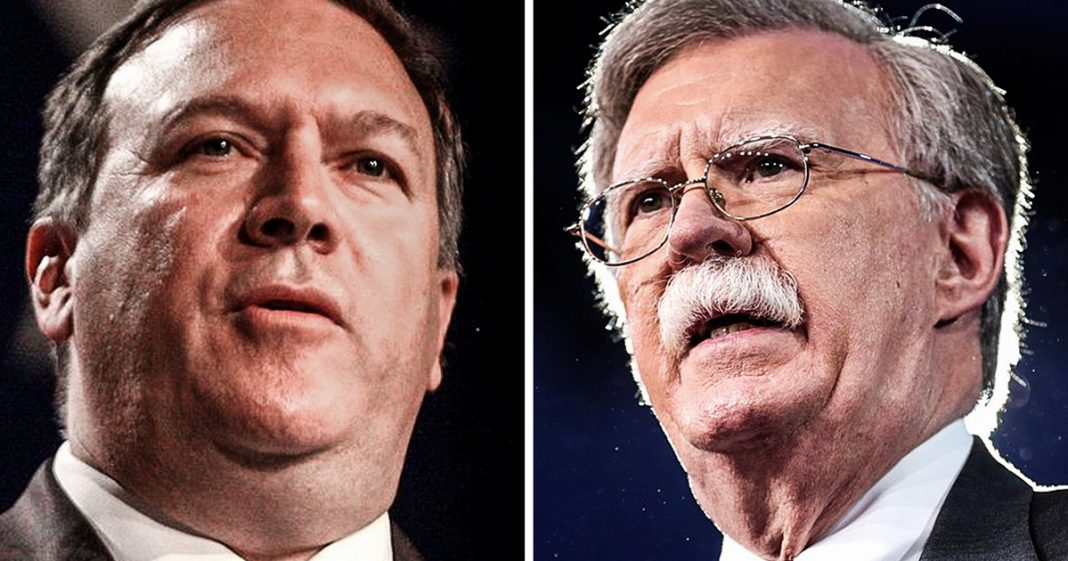 With the United States designating a part of Iran’s military as a terror group, the administration is inching even closer towards a war with Iran. And thanks to a law passed by Congress shortly after the 9/11 attacks, they might be able to do it without having to get approval from Congress first. Ring of Fire’s Farron Cousins explains how this new designation could allow the administration to act unilaterally against Iran.

The Trump administration has officially designated Iran’s Islamic Revolutionary Guard Corps as a terrorist group. That is a big designation. That is an important designation. It may actually be an unfair designation, but there is a very clear reason why the Trump administration wanted to give them this specific designation as a terrorist organization. And that is because Mike Pompeo and John Bolton continue to push us towards a war with Iran. Now you need to understand something here. The Islamic Revolutionary Guard Corps is actually part of a ranch official military. So they have now designated an official part of this country’s military as a terrorist organization. And as such, they may have given themselves the authority to go over to Iran and use military force against them without having to get congressional approval. And that is 100% why they wanted to designate this group as a state sponsor of terror, as a terrorist organization, as a terrorist group, whatever it is. Because there’s a little thing called the authorization authorization for the use of military force. The AMUF passed on September 14th, 2001 just a few days after nine 11. And what that little piece of legislation did was it gave the president of the United States broad authority to act unilaterally to attack anyone that they believed. One may have been hired, uh, behind the nine 11 attacks may have provided aid or comfort to al Qaeda or may have been associated with al Qaeda or who may actually be al Qaeda themselves.

Pompeo on Bolton are telling us right now that are ran is actually working with al Qaeda, specifically the guard corps that they just called him a terrorist group. They’re working with al Qaeda. So based on the language of the AMUF and thanks to this new little designation here that they have given the guard corps, they could in theory start sending over planes, tanks and bombs without ever having to go to Congress to get approval for any military action against Iran. Now, if they did use the AMUF, which uh, Pompeo oh by the way, has not ruled it out. He says he’s still, you know, on the fence about it could happen. Doesn’t know. Yeah.

It wouldn’t officially be a war. He’s only congress can declare war. It would just be, you know, another one of those us conflicts where we get involved in something even though most people don’t it. We go over there, we kill a bunch of civilians, we lose a bunch of US troops and at the end of the day make things just a whole hell of a lot worse than they were when we went over there. But we make a point, right? We get to show yet another country in the Middle East how angry and belligerent and stupid the United States could be when we put these idiot Warhawk nuts in charge of military policy. Pompeo and Bolton are dangerous human beings. They have never met a country that they do not want to attack and they have laid all the foundation right here to start bombing Iran. And we have been talking about this for a very long time. This has been something that has been in the works since John Bolton came to this administration and he was what, last April or May. So 12 months. Now we have been warning about this constantly because Bolton has not let up. He has not relented. He wants that war and thanks to this new designation that goes into effect today. The likelihood of him getting that war just increased exponentially.