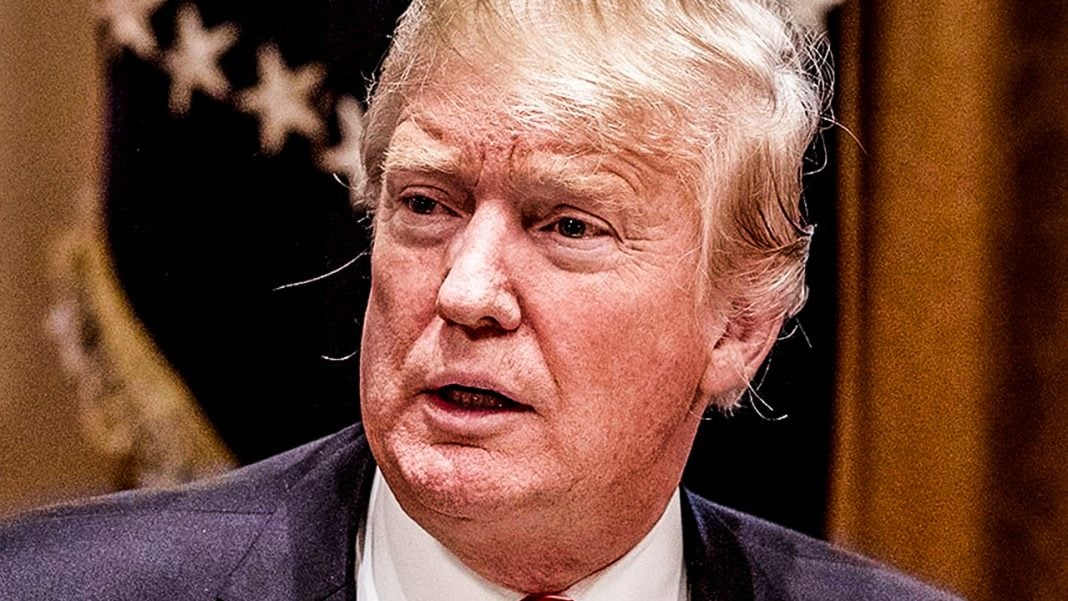 According to multiple sources at CNN, during Donald Trump’s recent trip down to the border he instructed border agents to lie to federal judges by saying that the “country is full” and we can’t accept any immigrants. Instructing someone to lie under oath is a felony, and at this point we can just add it to the long list of felonies that we know the President has committed. Ring of Fire’s Farron Cousins discusses this.

So last Friday, Donald Trump traveled down to the southern border to check out his little stretch of border wall. Saw his little plaque there hanging on the border wall saying this part of the border wall was Donald J. Trump. Oh, it’s a beautiful plaque. Unfortunately, that was actually not the part of the border wall that he had anything to do with that part was already there. So I’m sure future generations, it can be a little confused about that. Um, but sure he went down to visit his monument of xenophobia is what we should call it. But while he was there, in addition to patting himself on the back for something he didn’t actually do, what he did do was tell border patrol agents according to multiple sources who spoke to CNN and CNN being present there. He told border patrol agents to break the law.

He instructed federal agents to commit perjury when they have to go in front of judges, immigration judges. Here’s what he told them to say, we’re full. Our system’s full. Our country’s full can’t come in. Our country is full. What can you do? We can’t handle anymore. Our country is full. Can’t come in. I’m sorry. It’s very simple. Um, then he said if judges give you trouble, say sorry judge, I can’t do it. We don’t have the room as if the United States has some kind of crappy motel on Labor Day weekend. Oh, sorry. Yeah. We got a ton of people in here. We can’t accommodate you right now and maybe come back next weekend. I think we got some openings in Montana. I won’t know. We’re just gonna have to play that by ear. Let me put it this way. Countries not full. It’s not, not by a long shot.

You know, actually that’s part of the, the, the thing we’ve been talking about recently with everybody talking about the electoral college and you’ve got all these, you know, Midwestern states that have the population size as an entire state, that it’s smaller than some cities along the coast here in the United States. Yeah. Those states have plenty of room. We’re not full as a country. On top of that, 75% of people in this country think that immigration immigrants coming here is actually a net positive for this country because it is. I’ve used this example before and I’m going to use it again in Georgia a few years ago, they passed the law eliminating the H2B visa program or its equivalent at the state level. Basically they wanted to keep immigrants out. Even migrant workers. Do you know what happened? State lost billions of dollars in economic activity. Farmers went bust because they had nobody to go out and pick the crops.

You had fruit rotting on the trees. You had vegetables rotting in the soil because there was nobody that would do those jobs or at least not enough people to actually complete the job. This country depends on immigrants. Our economy depends on immigrants, so Trump sitting here saying, nope, sorry, we’re full. Sorry, go away. We’re full. We’re full, we’re full. We’re not. But all of that is also besides the issue, the issue is that we had a president of the United States who basically almost just committed another felony that we can just add to the list of known felonies that we know he’s committed and that is suborning perjury and is the official name of what the president tried to do down there because here’s the thing, had any of those border patrol agents gone into a courtroom and told that judge what Trump told them to say, then Trump at that point because they would actually have to do it in order for him to be guilty.

That is suborning perjury as of right now, since they haven’t done it, he’s just a moron talking to border patrol agents. In fact, he’s such a moron that after this speech that he gave, this part was private by the way to the border patrol agents. They went to their superiors and said, well, why am I, am I supposed to do this? To which the border patrol’s superiors had to say, no, no, no, no, no. He was not giving you an instruction. Don’t do that. You have to follow the letter of the law. That’s what they said. He wasn’t giving you instructions. You have to follow the letter of the law and do not do that. Basically, you had the higher option. Border Patrol have to tell her agents like, guys, that dude’s nuts. Please do not listen to him or you’re going to get in trouble. They told them, they said, you’ll be liable if you do the horrible thing the president just told you to do. Why as a country are we still letting this moron act like he is the president of the United States? Honestly, we know that he instructed Kirstjen Nielsen, formerly of Department of Homeland Security to break the law last week. He just instructed these border patrol agents to break the law. He tweeted out, witness tampering threats to Michael Cohen. This man keeps screwing with people who have to be in front of judges

there. This is a pattern of behavior that he is clearly established over the years. It’s criminal behavior too, by the way, and yet we just sit here as a country as a whole, thinking, oh, well, that’s just the moron Trump. No, this man has exhibited a very clear criminal pattern of behavior, and it’s only a matter of time before that forces him out of office. Unfortunately, it’s taken a little bit longer than a lot of us would like.