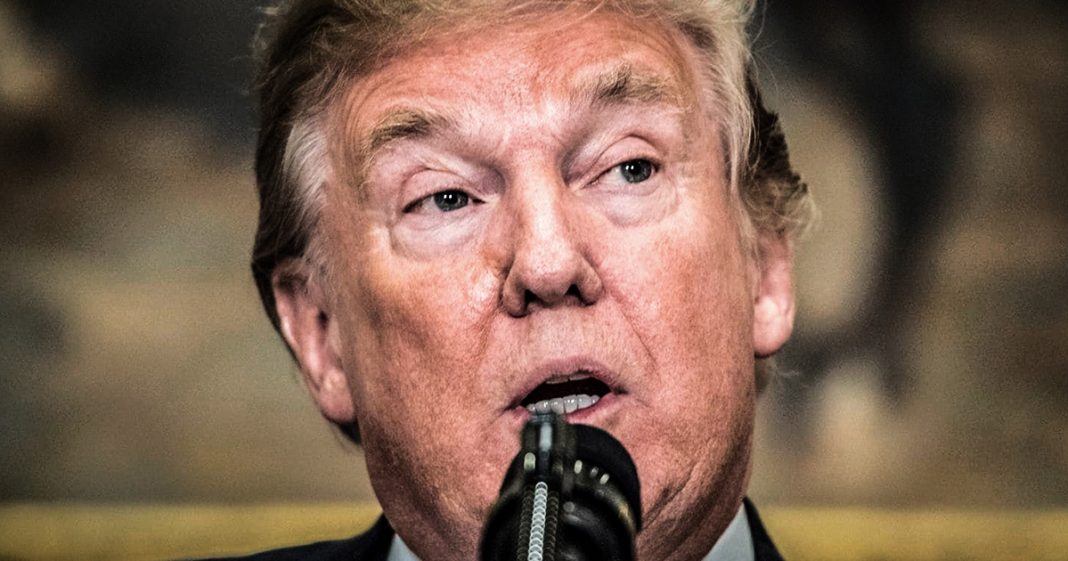 Another prominent psychologist has come forward to warn the public about the degenerative state of Donald Trump’s brain. This time it is Dr. John Gartner who believes that the recent actions of the President and his continuously slurring speech patterns are evidence of a severe problem, possibly early dementia or even Alzheimer’s, and that a full comprehensive exam should be done to get to the truth. Ring of Fire’s Farron Cousins discusses this.

Well folks, another day and another psychologist warning us that Donald Trump is suffering from some form of mental degeneration. We have psychologist John Gardner who is a former assistant professor at Johns Hopkins University School of Medicine. He’s now just a psychologist, but Dr. Gardner tells us in a new op-ed from USA Today, and I encourage everybody to read it, follow the link in the description of the video here, but nonetheless, he tells us that the red flags for Donald Trump’s mental stability are waving wildly, is what he says. You don’t even have to be a doctor to recognize what’s happening with the president. Now, this hot bed is not just an attack saying, oh, Donald Trump’s nuts. He’s crazy. No, this is actually a more nuanced look into what’s happening with the president using his own behavior as examples. Here’s one thing he points out that you know recently when he said Tim Apple instead of a Tim Cook, when he confused Paradise, California and call it pleasure California, things like that. Those are gaps for the most part, but there’s other gaps that the president commits that are actually symptoms. Case in point recently when he said that his father was from Germany, he said it multiple times and that single interview, that’s not a gaff. That is a symptom.

When he kept trying to say the word origins and said oranges and it kind of kind of stopped himself and he said the oranges, the orange is of it, that that was one of the biggest indicators because you could tell when you watch that clip, and this is what Gardner talks about here, you could tell he knew it was wrong, but for the life of him, his brain couldn’t get that correct word. That’s why he kind of paused and then then tried to say it again but failed to do so. That’s not an attack on the president that that is what happened there and that’s what’s so different about this piece by Gardner is that it’s not looking to make fun of him or insult him or tell us he’s an idiot. It’s looking at it from a purely diagnostic point of view.

Those are symptoms, symptoms of dementia, symptoms of Alzheimer’s, but they are symptoms and that is actually what psychologists use to determine how far along someone is. Now we do know when Donald Trump underwent his uh, health assessment from Dr Ronnie Jackson, uh, according to, to garner here, they gave him the Montreal cognitive assessment and Donald Trump passed. Do you know what that test involves? He has to identify a camel, a clock, and recite three numbers backwards. That’s it. If you pass that, you do not have full blown dementia. So Trump, at the time, this was 2008, did not have full blown dementia because he knew what a camel was and he knew what a clock look like, what’s been over a year.

And that’s exactly what Gardner tells us. Let me read some of this here. Dementia, international dementia care international says a person may start to mix up relationships and generations in the second stage of dementia. That is specifically talking about Trump repeatedly claiming that his father came from Germany in Alzheimer’s as language skills deteriorate, we see two types of telltale speech disorders or pair of phases. The first one is for Namic parasthesia, and that’s where words like big league become bigly. They run together and he also points out Donald Trump’s recent, the CPAC speech for the president kept doing that with words, just running them together and making a single new word. There’s art gaffes their symptoms, but the oranges thing, oranges versus origins, that was kind of the, the limit, right? At that point, they could tell something was wrong, but more importantly at that point, and go back and watch the video and you’ll see Trump could tell something was wrong. He didn’t know the word, but he knew that he didn’t say the correct one. That is a sign that, yeah, he still has enough brain to understand that his brain’s not working properly. The question is, does the rest of the American public so have enough brain to understand that his isn’t working properly? Okay.