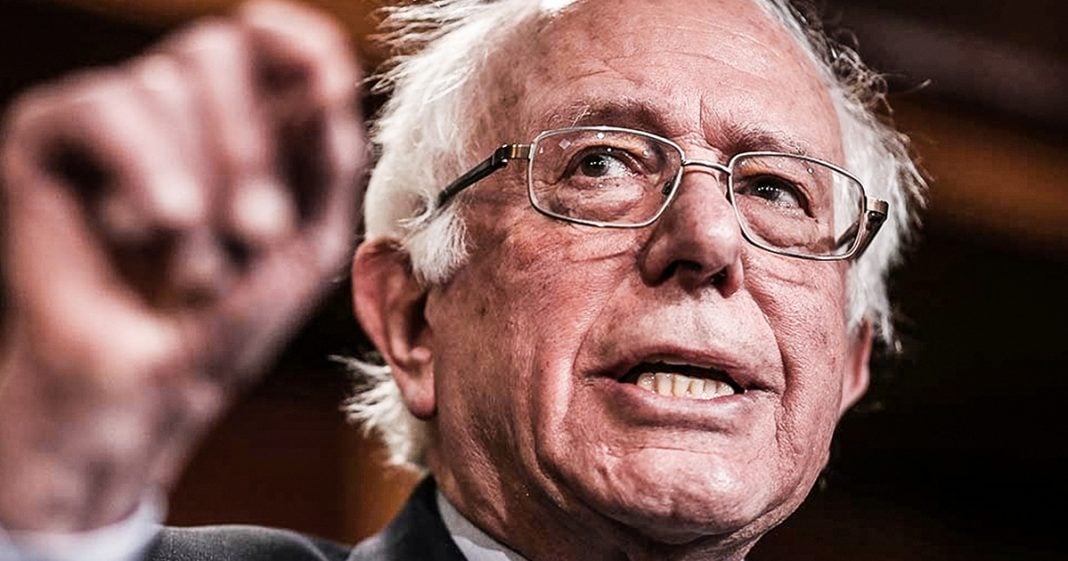 The right to vote is something that we’re still trying to figure out in the United States, and that alone is a sad statement to have to make. But Senator Bernie Sanders wants to take another leap forward for voting rights by extending the right to vote to people in prison. They are still citizens, after all, and they still live in the country and are effected by the rules and decisions of politicians, so shouldn’t they also have a say? Ring of Fire’s Farron Cousins explains why this is a good idea.

Over the weekend at a town hall in Iowa. Senator Bernie Sanders, who also happens to currently be the front runner of the Democrats running for president, said something incredibly interesting and to be honest, incredibly correct. He said that we as a country need to start letting people behind bars vote in our elections and Bernie understands what he’s talking about here because he comes from the state of Vermont, which is one of only two states in the entire country that let people vote behind bars. And he says the reason behind her to simple, you still live in the United States, you’re still affected by the policies. Your still an American citizen. So why the hell aren’t you allowed to vote? We’ve stripped these people have their basic humanity when we put them in prison. You have no rights, you have no freedom, you have nothing. And I understand people understand that prisoners there to take that away from you as punishment, but they can’t take away your citizenship rights. They can’t strip you of being an American if you’re an American, you have a right to vote. If you’re of legal voting age, this really isn’t even a debate.

This shouldn’t even be up for discussion. This should have been something that was done long ago, but we had asked backwards people running the country in the early days who also believed that certain American citizens only counted as three fifths of a person. So why are we still letting some of these state laws reflect that? You know, states founded in the 1700 still working off some of the laws from the 17 hundreds or 18 hundreds it’s a different time. It’s a different day. It’s a different world. The laws have to change accordingly. But here in the United States, we have to get on to this conversation and I am, I am so happy that Bernie Sanders did this and that he brought it up. I mean, here in my state of Florida, we just passed an amendment back in November in the midterms that restored the voting rights of 1.4 million former felons. These are people who were already out of prison. They just weren’t even allowed. The vote’s still because they had been in prison. Now, Republicans that control our state have tried to block it. They’re trying to stop it. They’re doing everything they can to institute a Modern Day poll tax to prevent these 1.4 million people from being allowed to vote, and that’s wrong and they’re getting called on it. And the national media actually is focusing a little bit on what these disgusting Republicans in my state are trying to do.

But nobody should ever be stripped of their right to vote. And here’s the thing, I understand there’s going to be some people out there who say, oh, you want somebody who out and killed 20 children. You think they should be allowed to vote? Okay, maybe. Maybe if we start having this conversation as a country, maybe we decided to draw the line somewhere after all the amendment we pass down here in Florida. It only includes nonviolent offenders, basically. Meaning if you murdered somebody or rape somebody, you’re not getting your right to vote back. Everybody else, please step over here to register. So maybe we could put some limitations on it, maybe if it’s needed, but I don’t want to start this conversation by already conceding things. I say all of them, and I am proud of Bernie Sanders for bringing this up and hopefully this is a narrative that the media latches onto and says, well, hold up.

This makes a lot of sense. These people are still American citizens. They’re housed in taxpayer funded facilities. They’re affected by the policies they live in the United States. So why the hell are we letting them vote? They’ve made mistakes, some more severe than others, some very minor mistakes that really have no bearing on whether or not they should be allowed to vote, but we’ve decided as a country that note, it’s just better to round all these people up, lump them together, the kind of bad and the very bad, all in the same cell, close them off from society, shut them off from the world and take away every right they’ve ever been given. We can do better as a country, but we can’t do better until we start actually having these conversations that thankfully Bernie started this past weekend.