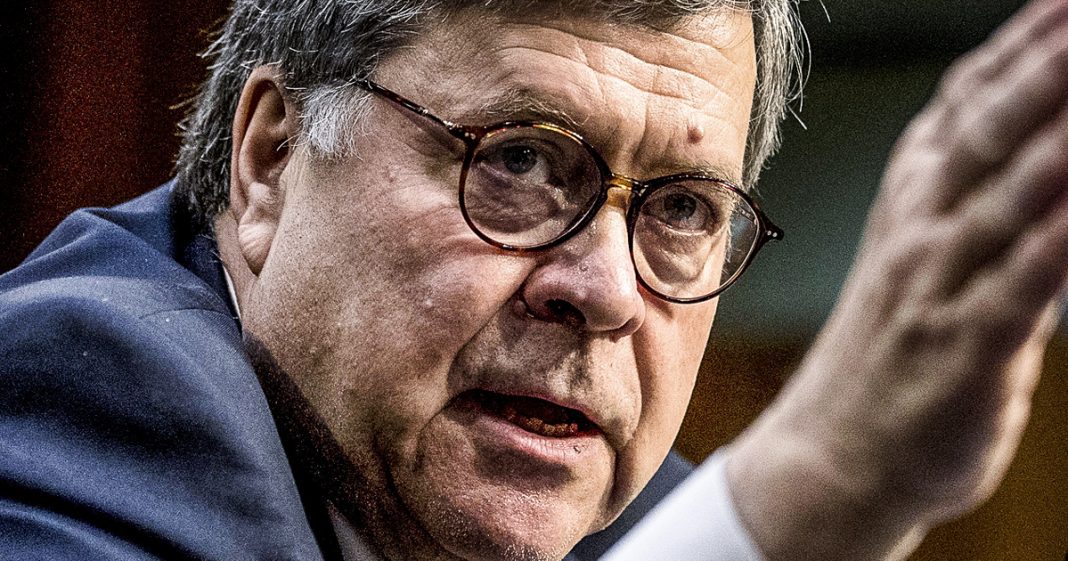 Good News, Republicans and democratic conspiracy theorists who tell us to constantly fear the deep state. William Barr, the attorney general has been listening to you and William Barr said this week in his congressional testimonies that he is putting together a task force, I guess basically a team of deep state Avengers who are going to start investigating the FBI for investigating Donald Trump. That’s right. William Barr, the attorney general of the United States has now announced that he is going to be investigating the people who investigated Donald Trump. Why God only knows probably because you do have plenty of Republicans out there and yes, even some of those on the left who say that this whole thing was a witch hunt, that it was politically motivated and that it began with a phony dossier that Hillary Clinton personally paid for. Well, let’s not forget that the Washington free beacon is originally the Republican group that funded that dossier and once Trump became the nominee, they figured it was pointless to keep paying it and then the Democrats came in and said, wait, we’ll pay you to finish it.

However, even before any of that happened, the investigation had already begun based on a conversation that George Papadopoulos had about a meeting he had in London with somebody who had emails that would have been damaging for Hillary Clinton, and he had that meeting with Donald Trump. That’s how the investigation started, not because of the Steele dossier. Hell, even Fox News has come out several different hosts and said that the Steele dossier didn’t start this investigation. It was what I just explained the conversation with Papadopoulos. Nonetheless, you still have republicans out there and again, unfortunately still some of those on the left who see a deep state conspiracy where one clearly does not exist. Yeah, we’ve seen the text messages. Those FBI agents did not like Donald Trump, but you know what they do like America and rules and regulations and parameters. They can’t just start an investigation because they don’t like a guy.

That’s not how it works. The chain of command that they would have to go through in order to make something like that happen in order for this to actually be a conspiracy is just unfathomable. Yet Republicans see it there and now William Barr is going to waste time and resources investigating a thing, which by the way, is actually already being investigated. That’s right, folks. We already have that investigation that is ongoing and according to Lindsey Graham, we’re about to have the Senate Judiciary Committee investigating this. After we just had the house judiciary committee investigate this for two years, they interviewed 40 witnesses, thousands of documents turned over to them and no evidence whatsoever that this was only a politically motivated investigation. Take out Donald Trump, but sure, in spite of all the evidence telling us otherwise, why not launch this third investigation? Why not launch the fourth one from Lindsey Graham? Why not just have every investigative body in this country looking into whether this was politically motivated, even though we already know it wasn’t? How many more times does this investigation have to conclude? Is this the new Ben Gazi? We’re going to have to have 1112 different investigations going on this and any given time, and then still not accept the results of it because that’s where it seems like this is headed. This is the new Benghazi because all Republicans know how to do is sit there and bitch and moan because they want Democrats thrown in jail for crimes that were never committed.