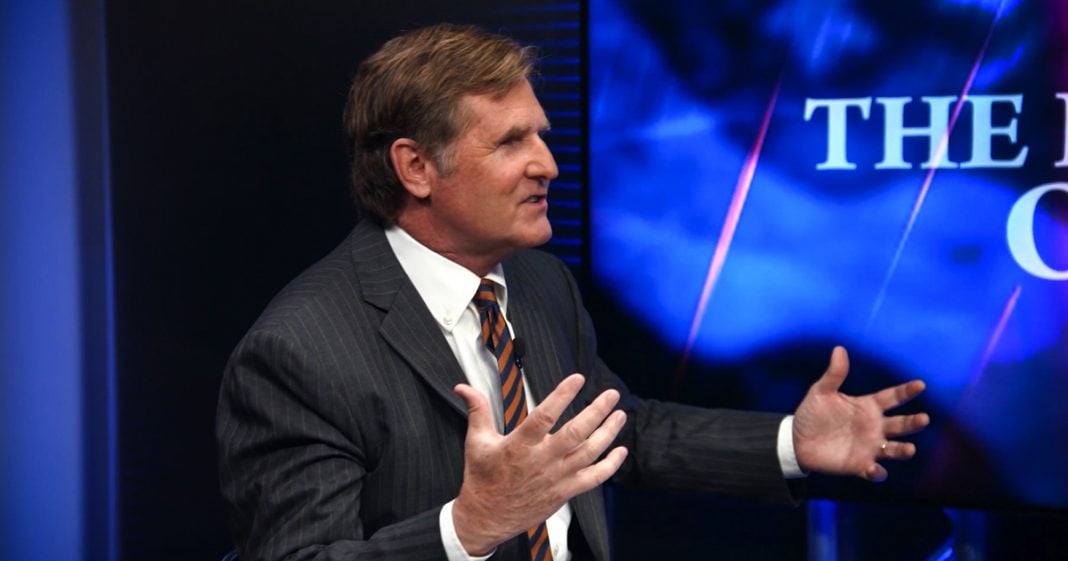 Republican Congressman Mo Brooks said that the rocks falling into the ocean is the reason for the rising sea levels across the planet. Ring of Fire’s Mike Papantonio and Farron Cousins discuss this.

Mike Papantonio:             Republican Congressman Mo Brooks said that the rocks falling into the ocean, not climate change, but rocks falling into the ocean is the reason for the rising sea levels across the planet. And as I read this story, I thought most of the rocks are falling out of his head, you know. But I mean, he actually made this statement. He was at, he was, it was in a hearing with a credible scientist and the scientist is looking at him like, what? What?

You know, this is a real scientist across from the table and this idiot from Alabama, Mo Brooks, says, well, you know, it’s not really just climate change, it’s rocks falling into the ocean. And I wish somebody in that hearing said, Mr. Brooks, most of those rocks probably have fallen out of your damn head. What is your take on the story?

Farron Cousins:                  This is the kind of idiocy that, that we’re up against though. You know, when we try to make any kind of progress on the issue of climate change, we’re going to have either an Imhoff holding a snowball saying, well, this can’t exist if climate change is real. Or, or even worse cause this, this is the dumbest, this is the dumbest thing I’ve ever heard to argue that climate change isn’t real, that it’s rocks. The white cliffs of Dover are, are falling into the ocean and, and dirt. He went on to say there’s just dirt from, from rivers that goes into the ocean and it’s just making the sea level rise by three or four inches across the globe.

Mike Papantonio:             Well, this is a guy who’s probably never traveled anywhere. I mean, if he’s been out of, you know, if he’s been out of Birmingham, Alabama, I’d be surprised. But ol’ Mo here, ol’ Mo had he made a trip to the, to the Arctic or the Antarctic, what he would see is in entire icebergs just cleaving off into the ocean.

And, and, and, and so this is something that any idiot can take a look at, They’ve got films of it. It’s not just the cliffs of Dover, it’s not just the rocks falling out of Mo Brooks’ brain. It is actually really happening all around the globe. The other part of this story is course another Republican, you know Lamar Smith from Texas. This is a guy you really want to watch because it’s almost like a comedy act.

Put Mo and Lamar together and you have a sure enough comedy act. But Lamar, Lamar here, he’s one of the guys that are pushing to defund the NOAA. You know, we want to take their money away from them because we think, we think that the studies that are being done are somehow generated by politics. Like there’s some political reason to say the damn earth is melting.

Farron Cousins:                  Right. The, the scientists have some kind of huge political payoff in their near future for warning us that we’re destroying the planet. But at the same time that they’re doing this, because this is a push to deny science like we’ve never seen. Because at the same time, right now going through the court systems, you have dozens of lawsuits. You’ve got lawsuits against the federal government, you’ve got lawsuits against state governments, oil companies, politicians, everyone that has contributed to this because the science at this point is undeniable. We’re able to link it back to these companies and they want to try to give those funders some clearance by saying, no, no, no, it’s not your oil burning. It’s this rock that just fell.

But the ones they leaked out to the public, first of all, they changed. And those, those stood for the proposition that yeah, there might be, there might be some climate change, but it’s not our entity. What I love about this, if you’ve got real lawsuits taking place, and I really think it’s just a matter of time, somebody is going to hit them.

Farron Cousins:                  Well, you know, this is a story we covered on Ring of Fire back in the first days of Ring of Fire, was the fact that Exxon was engaging in this campaign. You and Bobby Kennedy talked about it several times, about the fact that Exxon was trying to offer scientists, you know, 10, $20,000 if they were willing to write a paper that said that climate change wasn’t real. You know, I’ve had that conversation with people all across the board in the media. None of them even understood that or realized that that had happened, but that was something…