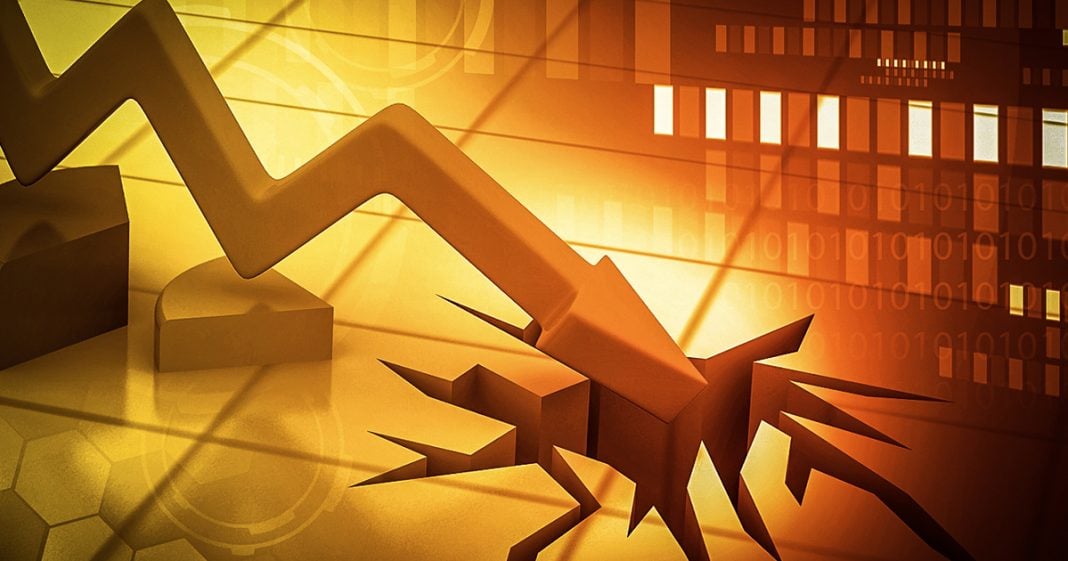 Prominent economists in the United States are sounding the alarm bells as economic indicators continue to tank. They now say that the chance of a recession has actually DOUBLED in the last 24 months, and now they are saying that it could be here in as little as 12 months. Ring of Fire’s Farron Cousins explains what these economic indicators are and how economists use them to predict catastrophes.

Good News. Everybody, Donald Trump’s economic policies have put us on a much faster course for a recession. In fact, economists are now warning us that the chance of recession in the next 24 months has actually doubled, doubled, and it could begin in as few as 12 months from right now. This is according to the economist at the Guggenheim partners which oversee $200 billion, uh, of the U s economy. And the reason they’re saying that we’re headed for a recession and that it’s getting faster is because the economic indicators that they look at to determine these things are beginning to deteriorate. Now, in case you’re not familiar with what an economic indicator are, there are plenty of them, different sites and different economists live list, different kinds of economic indicators. But let’s run through just a few. The first and foremost that all of them agree on is stock market, but not just going up, up, up or sometimes having a down, down, down. It’s stability. And right now they’re telling us there is no stability in the stock market. You know, some days we have massive gains.

A week later, we could see historic losses. That is what we’ve been seeing for months now with the stock market. Donald Trump sends out a stupid tweet, the stock market tanks, and it’s this volatility of the stock market and the overinflated values have a lot of stocks there that they’re predicting is going to come crashing down a crash that they’re saying could be up to 50% of the entire market value. Now, for those of us who don’t own any stocks, we’re not losing any money at first, but eventually those kinds of losses do trickle down and effect every one of us. It affects the housing market. Another economic indicator, which isn’t doing too great right now. Homes aren’t selling and that’s bad. Another economic indicator is consumer spending. Consumer spending is beginning to contract and it did not expand as much as economist had predicted, uh, during the holiday shopping season a few months ago. It’s getting smaller. Non-farm payrolls are not growing at the rate that they need to be growing in order to stave off a recession. Yeah.

All of these, uh, uh, payroll increases for average workers are not happening. The reason it looks like pay is going up in the United States is cause when they factor in those numbers of, you know, the person making $10 an hour at McDonald’s, they’re also factoring in the CEO of McDonald’s making tens of millions a year in PE. So yes, it looks like overall pay is up, but that’s only because you factor in people who are making millions of dollars a year on average. It is not increasing, but inflation is another key economic indicator. All of these taken together spell recession, and the best economists in this country right now are telling us that not only is it coming, but it’s coming twice as fast as we originally predicted. So buckle up folks, especially with Trump’s new tariffs on the European Union, things are about to get pretty bad economically speaking here in the United States.