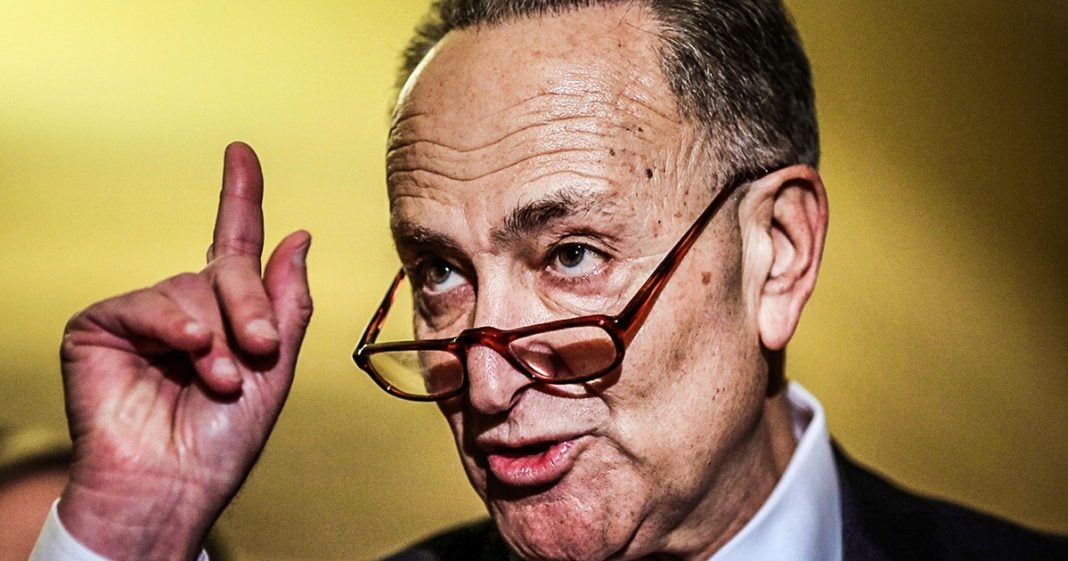 Senate Minority Leader Chuck Schumer wants answers, as does the public. We all want to know how a woman was able to secure a room at Mar-a-Lago with the intent to install malware on computers at the resort (allegedly.) And recently-fired Secret Service Director Randolph Alles is the man with the answers, and that’s why  Schumer has called on Alles to testify before the Senate about the major vulnerabilities at Trump’s resort. Ring of Fire’s Farron Cousins discusses this.

So earlier this week is everybody knows Donald Trump fired the director of the secret service Randolph “Tex” Alice and after Alice was fired, Senate minority leader Democrat Chuck Schumer issued a statement where he called on the ousted director of the secret service to come and testify in front of the Senate because Chuck Schumer, like a lot of people in this country want to know just how bad the security problems are at Mar-a-Lago. That a woman was able to walk in, get a room and unload her room with all sorts of high tech devices that we can only assume were designed to get into the computer systems at Mar-a-Lago. I mean, after all in the last few days, this story of this woman, this Chinese woman who came to Mar-a-Lago, uh, after seeing an event that Cindy Yang was advertising the massage parlor owner, she came in there with five sim cards, nine Usb drives and external hard drive for cell phones, a laptop and a signal scanner to make sure there were no recording devices in her room.

She had a room there. I mean, I think that’s the part of the story people are, people are not paying enough attention to. They didn’t just catch her if she was coming through the door, she didn’t just lie to them and say, Oh, I’m sorry I’m here for the pool. No, I’m here for the UN thing that was actually canceled. No, she had checked in. She had checked in and had unloaded this stuff in addition to $7,500 in cash that she had in her room. And Chuck Schumer Rightfully wants answers because yes, the secret service did eventually find this woman and stop her. But we can only assume that in the time that passed from the time this story broke to the time that Alice was fired, that somebody within the secret service, likely Alison Self told Donald Trump, you’ve got some very serious security issues down there at Mar-a-Lago and we need to rethink these visits.

We need to rethink security. We need to have more guards there, more safeguards in place, and that likely pissed Donald Trump off and that’s likely why techs, Alice was fired in. Chuck Schumer wants to know. Chuck Schumer wants to know what the Secret Service told Donald Trump. Schumer wants to know what the secret service did in order to find this woman or how long she was there, or whether or not she was even able to upload that malware that immediately installed itself upon insertion of a USB. Cause we don’t even know if she got it in there. And that’s even scarier. We know that Donald Trump has had plenty of policy conversations with nonpolitical people at Mar-a-Lago. We know he’s there frequently. We know he talks about things he ought not be talking about. So if this woman was successful in getting her malware there, God only knows who she’s working for, what they know. But Schumer wants answers as do a lot of people in this country. And I think we deserve answers. And that’s why I agree with Schumer on this point. And it’s past time already for Alice to show up at the Senate and tell those people there what he knows and what he told the president.