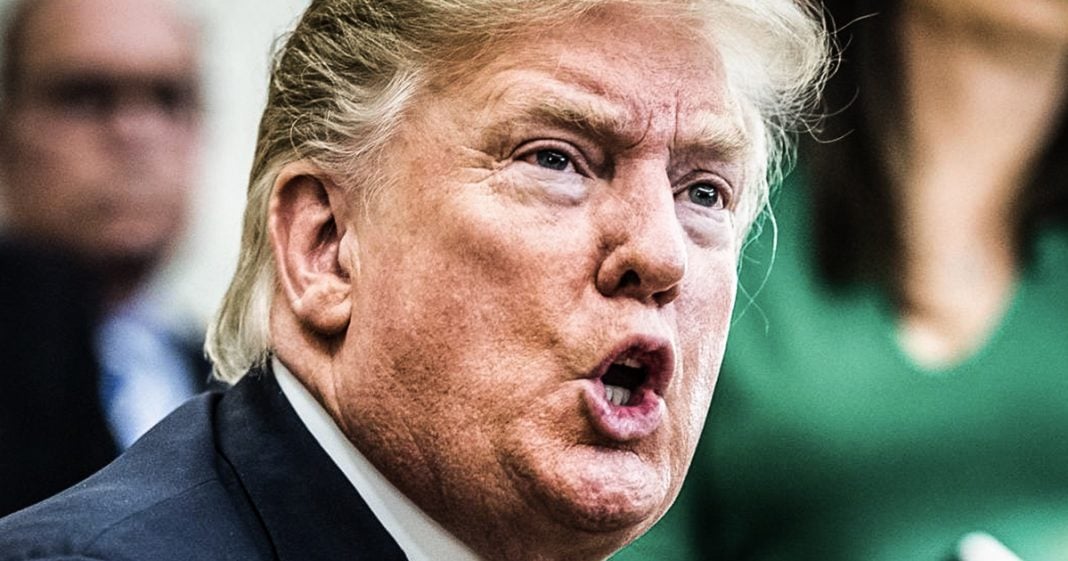 According to the latest round of polling, more than half of the country wants Donald Trump to release his tax returns. While Democrats in the House of Representatives are working on the issue, the President and his administration have made it clear that they aren’t going to hand over those documents ever. The courts will likely be the final say in this matter, and Trump won’t like what they have to say, as Ring of Fire’s Farron Cousins points out.

According to the latest round of polling, a majority of people in the United States want Donald Trump’s tax returns made public 56% to 27% believe that the public should be able to see what is hiding in those tax returns. 27% say no, it’s none of our business. We don’t need to see that all hail king Trump. I just added that little part. They didn’t say that probably uh, these numbers get broken down a little bit more. Out of the people who think we should see the taxes, you have 30% who believe they would reveal information that would challenge Donald Trumps competency to serve as president of the United States. 22% say that it would be not necessarily ending his political career, but it would be very harmful to his career. 20% or excuse me, 27% say there’s probably not going to show anything worthwhile at all, but they still think we should see them.

And then the rest really don’t have a opinion one way or the other. So that is a little bit of an interesting dichotomy. It is almost even between the people who say, Yep, it’s going to totally in his presidency and those who say we want to see them, but you’re not gonna find anything. I personally happen to fall somewhere in those first two categories of, it’s probably really bad, but it may not be bad enough to end his presidency, but it could be because what I’m thinking is hiding in these tax returns is one, either information showing that Donald Trump has not worth as much as he said he was, which would implicate him in quite a lot of bank fraud, which could in his presidency or two. You may find evidence of some kind of illegal dealings in there. I, I wish you could find that.

Trust me, I do. I just don’t know that you’re going to see it there. I think the bank fraud lying about his net worth, which would be both a hit to his ego and implicate Him and felony bank fraud. I think that’s the more realistic one. Of course. Again, there’s also the possibility that there’s nothing in there, but since we don’t have them in the White House repeated this week, that Democrats are not going to get your hands on these things. All we can do is speculate as to why they keep hiding them from the public. If they were totally awesome and perfectly clean tax returns, just like with the Muller report, every American would already be issued a copy of them because Trump would want to brag to us about how clean he is, how rich he is and how great he is. Since that hasn’t happened and they refuse to even let us see digital versions of them, I’m inclined to believe that there’s something in there he obviously doesn’t want us to see.

Now here’s the counter of this, not necessarily counter, but it’s a, I guess the other part of it. We still have a lot of Democrats running for president, including all but four of them who have not yet released their tax returns and as such, we’re also starting to see a little bit of the craziness, the media hype over these Democrats not releasing their tax returns. Most of it is heaped on Bernie Sanders and the reason for that is obviously he has had the longest time to release them, but nobody’s really talking about the fact that you know, the other c four of released minus Bernie because he also hasn’t 17 the other 17 Democrats running for president have also not released their tax returns and we do need to see those. I don’t think, especially with the case in Bernie Sanders, I don’t think we’re going to see anything in there that’s going to be illegal, that’s going to disqualify him from being president.

I think it’s going to show that maybe he makes decent money as other people have already pointed out and then they’re going to try to say, oh, he can’t care about the poor because he’s not a poor. I think with Beto O’Rourke, I they were going to see, he makes a hell of a lot of money and that’s going to turn some people off, but overall there’s not going to be any just qualifying information. At least that’s my theory on it. Whether you love or hate the folks, they’re probably not doing illegal stuff. Trump, on the other hand, we know, we know that he’s lied about his net worth in order to secure loans, which is bank fraud. And that’s why these tax returns are important. That’s why they matter. And that’s also likely part of the reason why a majority of the American public says Donald Hand over your tax returns.